Look up at the sky. What do you see? Typically, you’ll be faced with a bright blue sky and white, fluffy clouds. But, have you ever looked up to notice clouds that don’t look nearly like the others?

If we’re lucky, we can sometimes catch glimpses of clouds of all colors, ranging from greenish tints to vibrant pink hues. But, as something that’s only made out of water vapor, how is this even possible? We wondered that, too. But, we’re here to tell you all about pink clouds and how they come to look so pretty.

How Do Clouds Become Pink?

First, let’s talk about how some clouds become pink in the first place. There are a few reasons this phenomenon can happen to clouds, so we’ll discuss both.

The most common reason some clouds appear pink is simply due to something called atmospheric optics.

Wispier white clouds, then, are packed full of the same water molecules, but they’re not as tightly arranged. Thus, you can see through them easier and they’re not as bright white. So, when we start to see pink clouds, or even red or orange, we can likely attribute light to this as well.

At a certain point during sunrise and sunset, sunlight itself becomes red due to refractions of other colors around it. This red light, then, is reflected throughout the sky, and, when shone through clouds, creates hues of pink, orange, and red behind the clouds themselves.

It is important to recognize here that clouds are never changing colors. They do not have color; they are a direct reflection of the water vapor they are created from.

So, when you see different colored clouds, it is simply a result of the light being shone through it. Think about it as if a bright pink light is being shone behind a white sheet: the color of the sheet doesn’t technically change, it just starts to reflect a new hue.

Unfortunately, bright pink clouds can also be a sign of something a bit more negative, depending on the circumstance.

Most commonly, pink clouds at sunrise or sunset are going to be attributed to light, but, when these colors are extra bright and prominent–with more reds than subtle pinks–you probably have pollution to thank.

A. R. Ravishankara, a director of chemical sciences at the NOAA Earth System Research Laboratory in Boulder, Colorado, explains that red skies simply do not happen without aerosols in the atmosphere.

Aerosols are often released as a result of human activity, forest fires, or even just excess dirt. Typically, in desert-based places like Arizona, the skies are going to be filled with clouds that are a bit more colorful than other places, simply because of the high levels of dust and sandstorm.

In big cities, aerosols are typically going to be emitted from cars, busses, and trucks. So, places with higher traffic are also likely to see pinker clouds as the day comes to a close.

When Does This Happen?

The chances of you seeing pink clouds are going to be high around sunset and sunrise. Right as the sun has started to rise, or right as it begins starting to set, the angle between the sun and the horizon is at a small percentage.

Being at less than 10%, the sunlight starts to appear red due to the colors it is refracting. As light hits the atmosphere, it experiences something called scattering, which is what sends the light’s wavelengths into various directions, resulting in various colors. Shorter wavelengths are going to appear blue and purple, like what you’d see in the daytime.

During sunrise and sunset, however, these wavelengths are much longer, and by the time they reach us, they’re reflecting colors of pinks, oranges, and reds.

So, these are really only the times you can experience these pink clouds, unless there are extenuating circumstances like we talked about earlier with weather and pollution.

If you happen to be lucky enough to be flying during a sunset or sunrise, you’ll get to experience these colors from a brighter, clearer perspective.

Instead of being beneath the clouds, you’re directly above them, seeing them without the hindrance of pollution, dust, or excess light.

The Other Colors of the Clouds and Their Meanings

Pink clouds aren’t the only colorful clouds you can find in the sky. At different points during the day, you may be able to see gray clouds, yellow clouds, red clouds, and even light green clouds– all for different reasons, too.

When you see blue-gray, gray, or black clouds, you know that a storm is on its way.

Blue-gray clouds are typically the result of clouds that are reflecting light scattering behind them. As we mentioned, blues (along with grays) are on the short end of the light wavelength spectrum, so these are often the colors we see most frequently. Here is another article I wrote explaining how clouds turn dark and sometimes, invisible.

When you see a dark-blue hue in a cloud, this typically means that a storm is brewing within the cloud. The blue colors are a result of scattering water droplets forming to produce rain.

To us, and from so far away, this appears in dark gray colors, indicating weather. The taller the cloud, the darker the bottom it is going to be.

Occasionally, you’ll find yourself looking at some darker, greenish clouds. Scientists still aren’t entirely sure what causes this green hue, but it appears to be the result of red-hued sunlight passing through storm clouds.

Typically, if you see greenish clouds, these will likely be paired with quite a severe thunderstorm. More than just rain, these clouds are likely reflecting the act of lightning, hail, and even potential tornados.

So, if you find yourself staring at a sky full of greenish tinted clouds, it’s probably time to head inside for the day.

Yellow clouds are often the direct result of excess dust in the air, forest fires, or pollution. Often, during a fire, you’ll notice yellow smoke emit; this yellow smoke is then directly reflected within the clouds, casting a yellow hue.

Yellow is usually the consequence of nitrogen dioxide in the air, so it is often attributed with high-pollution areas like big cities.

Unlike pink or red clouds, these don’t have to be seen during sunrise or sunset, though, again, they’re typically the sign of something a bit more negative than you may like.

Not seen very often but stunning enough to stop in your tracks, rainbow clouds are a phenomenon that everybody should experience.

When we say rainbow, we’re more so talking about iridescent colors, or the rainbow of colors you see on a water’s surface.

These colors can appear as bright as your regular rainbow, or they can be a bit more subdued and pastel.

To achieve these myriad colors, scientists believe that these clouds are filled with ice crystals, reflecting off light wavelengths of all types.

These colors are usually only seen within wispier, more translucent clouds, as the light is able to fully penetrate and reflect beautifully.

Grab a telescope, maybe some sunglasses, and find a nice open spot to observe some other magnificent atmospheric conditions. More than just some colorful clouds, our big blue sky can sure produce some mind-blowing phenomena.

Otherwise known as the Northern Lights, the Aurora Borealis is a natural light phenomenon most often seen around the Arctic.

This happens as a result of a disturbance in something called the magnetosphere, a region in space that affects an object’s magnetic field. This disturbance is caused by solar wind and results in varying colors being discharged throughout the night sky.

Check out our article “22 Mind-Blowing Rare Natural Phenomena” for more information about the Aurora and other amazing world wonders.

More than just colorful clouds, though, the Aurora Borealis releases waves of light across the sky, similar to blankets of color just draped in the atmosphere.

Primarily, the Northern Lights emits green glows, but you’ll be able to find a rainbow of other hues as well.

People travel from all across the world just to experience this light phenomenon, but if you’re lucky enough to live in high-latitude areas, you might be able to see it yourself.

Mammatus clouds, or mammary clouds, are another strange sky phenomenon that, to the naked eye, looks absolutely incredible.

These clouds appear as though they have bulbous protrusions coming out from underneath them, looking like little pouches in the sky.

If you see them, you won’t for long! These clouds only tend to hang around for about 10-15 minutes.

You’ll usually see these clouds appear before or after a storm, and this happens when cold air begins to fall, or sink, down to the bottom of the clouds, forming little pockets of bulging clouds.

You have seen it in the Pirates of the Caribbean movies, but you can see it in real life, too: the green flash.

The green flash is a phenomenon that happens moments after sunset or moments before sunrise when the sun’s UV rays are bent and results in a very quick flash of green light.

This is only able to be seen for a few seconds, so make sure to pay close attention if you’re at the right time and place (typically the beach, looking off into the horizon).

In the movie, the light is represented as a large ray shooting up into the sky, when in reality, it’s more so just a beautiful green hue where the sun typically is.

Paying Attention to the Clouds

When we fail to do this, we miss all the gorgeous colors that the clouds can reflect for us. For more information on clouds and the various types that the sky produces, check out our article “10 Types of Clouds in the Sky”.

Pink clouds, though somewhat rare to see, are a wonderful sight that can make any sunrise or sunset more gorgeous than ever before.

Now that you know what makes these pink clouds so pretty, too, you can appreciate them even more. 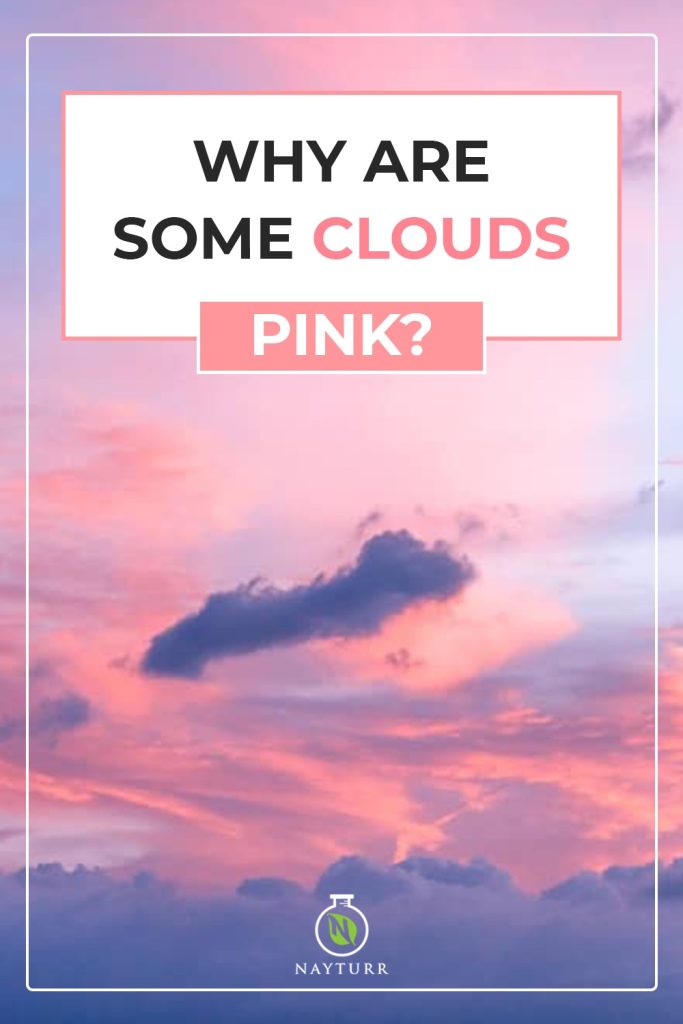