Clouds can freeze. They are made up of water droplets or frozen crystals. Even when these tiny particles are frozen, their mass is tiny, so they remain airborne. However, due to a phenomenon known as supercooling, sometimes a cloud’s droplets don’t freeze.

There are some common misconceptions about clouds. The first is thanks to movies and cartoons, where clouds are depicted as fluffy, cotton-like masses.

The other is believing clouds are made up of water vapor. It’s important to establish what clouds actually are in order to understand why they can sometimes freeze or not, thanks to supercooling.

What Are Clouds Made Of?

Anybody that’s flown in an airplane knows there are not a bunch of angels using clouds as sofas. There are no birds using clouds as luxury nests, either. Instead, the inside of a cloud is similar to thick fog and leaves droplets across the plane’s windows. This is because clouds are composed of water droplets.

Clouds are not water vapor. Water vapor isn’t visible. It is in the air all the time, and we walk through it oblivious. Instead, clouds are formed through condensation.

People who’ve been trying to wear glasses with a mask are very familiar with condensation: it is why glasses fog up!

Condensation is when water vapor is cooled back into water droplets. So with glasses combined with masks, water vapor traveling in the wearer’s breath condenses on the glasses, becoming visible. (And, annoyingly, making it hard to see.)

Think of the sky like glasses, an area that is cool. Warm water vapor rises up in the air; as it reaches the cooler parts of the sky, the vapor becomes droplets.

For more detail about How Clouds are Formed, check out my article “How Do Clouds Form?“

Sometimes the sky (our virtual glasses) is really cold. In this case, the vapor cools and becomes tiny crystals. These also float around, bumping into other crystals, and coalesce (merge together). Or droplets already in a cloud are cooled further, and the droplets crystallize.

Why “Frozen Clouds” Don’t Fall Out of the Sky

A frozen cloud isn’t a solid mass, like a chunk of ice. Instead, the frozen water crystals that make up a “frozen cloud” are tiny. Like specs of dust that flit around, they are light enough to stay airborne.

When the crystals that make up a cloud become too heavy, you get snow.

But not all snow is the same, (and we don’t just mean yellow snow). Snow falls from clouds in different ways, and this changes what we experience down below. Here’s an explanation…

The temperature impacts the look of snow crystals. All of the crystals will have six sides, but they will look different depending on the temperature in which they were formed:

But sometimes, the clouds are supercooled, so they have remained as liquid, despite being cold. As a result, the droplet doesn’t freeze until it falls. This will create snow pellets, or graupels, which are crumbly.

Sleet is a Combination of Ice Pellets and Rain

Hail, however, is not snow. Hail is usually formed during a thunderstorm and is made when air moves upward. The droplets fall, cool, then don’t fall because of the upward air. Instead, they continue to grow as more and more droplets hit them and freeze until, at last, they are heavy enough to fall through the updraft.

Supercooling: Why Some Clouds Don’t Freeze

Supercooling is when water is cooled below its freezing point, but it remains a liquid. Which sounds like a magical power, to be fair.

But clouds pull this magic trick off all the time. Altocumulus clouds are well known for it. Altocumulus clouds often look like sand that a rippled tide has shaped. They can also look patchy, like a cloud puzzle whose pieces were not snapped together.

Check out my article, “Every Different Type of Cloud Explained” and “10 Different Types of Cloud in the Sky“, for more information about all the different types of clouds and their properties.

Supercooling is also responsible for the “hole-punch” stunt clouds sometimes do. Here’s a picture of a ‘hole-punch’ cloud:

How Does Supercooling Happen in Clouds?

Scientists have had the same question since nature’s magic trick was discovered in 1724 by Daniel Gabriel Fahrenheit. It has to do with the disorderly way liquids behave.

Liquids, by their nature, are not a solid substance, so while the molecules are hanging out together, as a mass, they are not confined to a specific arrangement unless their neighbors force them into a shape.

Take a bowl for example. Water in a bowl forces the liquid to conform to the shape of the bowl. Unless you knock it, then the neighboring force sends the water out, where it will spread in the air until gravity makes it hit something. If the liquid misses the bowl, it will hit the ground, where the liquid’s shape will continue to spread until the friction causes it to lose momentum.

In the air, clouds are not held together with a bowl or any other surface than the surrounding atmospheric conditions. So the liquid in a cloud is not orderly and is shifting around. If the water is really pure, it increases its disorderly conduct.

Up in the sky, with no bowl around to make it behave, the water in a cloud needs a “seed,” an ice nucelli, to get it to start clumping enough to make crystals. These “seeds” are an impurity, such as salt drifting in the air. Without a “seed,” clouds can withstand temperatures as low as -34.6F (-37C).

There are a number of clouds and formations, but they are commonly put into three basic categories.

However, if you are really into clouds, they can be broken down into many more types. You can learn about the types in more detail in my articles:

Here are a few interesting clouds and unique formations.

5 Types of Clouds and Formations

So yes, clouds can freeze, but some defy it. All of which is rather fascinating.

Check out my other articles about clouds: 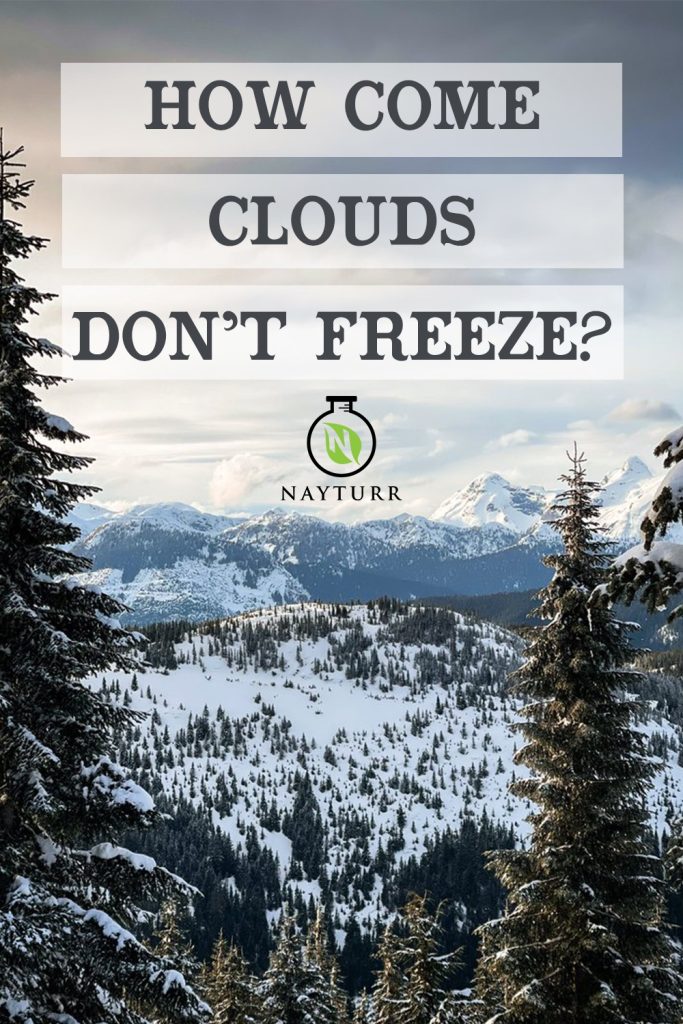