Gazing up at the clouds on a sunny day and imagining which shapes you can identify must be a favorite pastime for all ages. The clouds gently move, change shape and some seem to disappear. I always wondered where the clouds disappeared to and decided to investigate.

Clouds form when the invisible water vapor in the air condenses into visible water droplets. Sunlight is scattered by these droplets making the clouds appear white. If the droplets evaporate again due to heat, the vapor can no longer scatter the sunlight and thus seem to disappear.

Water is always visible in solid or liquid form. During these phases, the water molecules are so closely bound that they form a liquid or solid. Water appears in the vapor or gaseous phase as a result of many natural processes. The appearance of water in this phase is dependent on several interesting factors. Let’s look at these more closely.

When is Water Vapor (Clouds) Visible?

Water vapor is formed when liquid water evaporates from oceans and rivers. The snow formed on the snowcaps of mountains first melts to form liquid water, which flows down the mountains to form rivers. The snow falling on the polar regions compress to form glaciers, slow-moving rivers of ice that move down due to gravitational pull on the mass of ice. These glaciers either melt when they reach the warmer lower elevations or when they crash into the oceans.

This colder air will rob the water molecules of their energy, forming droplets (condensation). The droplets will reflect sunlight and appear white. These collections of water droplets at high elevations are called clouds.

If the cloud cover becomes thick and heavy, the droplets absorb the sunlight, making the clouds appear dark. The clouds become saturated with the water droplets, and this causes larger droplets to form. Once the droplets are heavy enough to overcome the convection currents keeping them in the air, they fall to Earth as rain.

As the rain falls, the clouds become less dense, and the sunlight falling on the large raindrops is refracted, forming a rainbow. The white light is split into the constituent colors of light, forming a red, orange, yellow, green, blue, indigo, and violet rainbow.

Once the water droplets in the rain cloud have fallen out of the cloud, the density of the droplets diminishes. The energy of the Sun heats the droplets again, causing them to become invisible water vapor again.

Each water molecule (H-O-H) consists of one oxygen atom bonded to two hydrogen atoms. The two hydrogen bonds are not linear but at an angle of 104.5o.

The angle occurs because the oxygen atom has two sets of lone pair electrons with interacting repulsive fields. They consequently push the two hydrogen atoms closer together since the lone pairs are mutually repulsed and tend to move away from each other. The non-linearity of the water molecule gives water some very interesting properties.

In water, the highly polar O−H bonds result in very little electron density around the hydrogen atoms. As a result of two covalent bonds and two hydrogen bonds, the geometry around each oxygen atom is approximately tetrahedral. The water molecule has a more positively charged side of the hydrogen atoms and a side that is negatively charged on the side of the much larger oxygen atom.

The water molecules arrange themselves with positive and negatively charged sides of molecules, lightly bonding them into liquid water. These small attractive forces are called Van Der Waal forces. If it were not for water molecules being polar, the formation of visible water droplets would not have been possible.

Where Do Clouds Appear in Our Atmosphere?

There are five layers of the atmosphere around the Earth:

The troposphere can be further broken up into three layers.

Cumulonimbus and nimbostratus clouds are what is seen during rainstorms. These clouds have a lot of energy in them in the form of electrostatic energy and potential energy due to the mass of water they carry. The energy is provided by the Sun, heating the surface of the Earth and leading to the evaporation of water from the surface of the oceans.

NOTE: If you want to know more about the difference in these kinds of clouds, check out this article I wrote where I explain every different type of cloud.

The heat of the Sun also causes convection currents, which carry the water molecules generated by the evaporation to higher altitudes. As warm air rises and carries the water molecules, electrostatic charge builds up in the body of water vapor due to the polar molecules rubbing against one another, leading to thunder and lightning.

Thunder is the sound made when air particles are forced apart when a bolt of lightning travels from the clouds to the Earth, allowing for a discharge of electrons that build up in the clouds.

What Can We Learn From Clouds?

Weather satellites orbiting Earth can look down on the weather systems active in the troposphere. The weather systems form due to the interaction of several air masses present in the atmosphere. The effects of the Earth’s rotation about its axis, the Sun’s heating effect on the planets surface, and the hydrological process resulting in the formation of weather systems.

Meteorologists study cloud formations using satellite images and are thus able to predict the weather. The ability to see the clouds and predict the formation and path of a weather system is of critical importance. Hurricanes are one of the most destructive and dangerous weather systems, and every year many lives are lost, and hurricanes and the resultant flooding cause billions in damage.

Humanity is very dependent on our ability to forecast the weather and thus be able to predict danger. The climate on our planet has undergone some significant changes in the past 200 years since the industrial age. The amount of carbon dioxide has risen to above 400 parts per million due to the burning of fossil fuels.

Gasses like carbon monoxide and methane are naturally occurring in our atmosphere, but the increase in their concentrations has resulted in more trapping of the Sun’s energy. The greenhouse effect results in the warming up of the atmosphere and leads to weather systems of ever-increasing energy and intensity.

The climate of our planet is in a delicate balance. There is only a thin shell of atmosphere protecting us from the cold of outer space. If this balance is disturbed, it can have dire consequences for life on Earth. There have been five major extinction events during the history of our planet. It is believed that if we cannot dramatically change the way we pollute our planet, we are entering the sixth mass extinction.

In doing so, the water goes through different phases: liquid, solid (ice), and vapor. When water evaporates from the ocean or rivers, it becomes invisible water vapor carried into the air by warm convection currents and carried upwards into the colder layers of the atmosphere.

The Earth is a watery place. Roughly 71 percent of the Earth’s surface is water-covered, and the oceans hold about 96.5 percent of all Earth’s water. Water also exists in the air as water vapor, in rivers and lakes, in icecaps and glaciers, in the ground as soil moisture and aquifers, and in all plants and animals.

Thanks to the hydrological (water) cycle, our planet’s water supply is constantly moving from one place to another and from one form to another.

Water from the oceans, rivers, and lakes evaporates due to the energy of the Sun. The resulting water vapor is lifted into the sky by the warm convection currents caused by the Sun. As the water vapor reaches colder altitudes, the molecules lose energy and arrange themselves into droplets (condensation). The polar nature of the molecules holds the droplet together via weak Van Der Waal forces.

The forming droplets are also electrostatically charged, and this leads to the formation of clouds. Lightning happens when the electrical charge built up in the clouds becomes so high that the electrons travel to Earth as a lightning bolt.

The clouds become saturated with droplets as they grow in size, and the formation of droplets continues until the droplets become so large and heavy that they fall back down to earth as rain. If strong convection currents force the droplets even higher to altitudes where they freeze, they may fall back in the form of snow or hail.

The water falls back down to Earth in the form of rain, snow, or hail. This water will fall on the oceans, land, lakes, and mountains, entering the cycle anew. This cycle will continue over and over. If the cycle becomes disturbed, it can lead to an Ice Age where all the water is frozen, and the planet becomes a frozen lifeless desert. Other disturbances in the water cycle can lead to severe droughts, tropical storms, and floods.

So, Do Clouds Really Disappear?

No, they don’t. They just evaporate and become invisible water vapor. The micro-droplets of water become another form or water.

The study of cloud formation is integral to the wellbeing of life on our planet. As part of the hydrological cycle on our planet, cloud formation brings rainfall and distributes the life-giving water to where it is needed. Only three percent of Earth’s water is fresh. The competition for access to freshwater has started wars and will in the future again lead to conflict.

Thankfully, the water molecule is polar and is visible when it condenses in the atmosphere, giving us information about the weather patterns.

Observing the stars and moon at night and the clouds and the path of the Sun during the day has allowed humanity to become successful at growing food and avoiding natural disasters. No wonder that it forms the basis of so much in science today.

Learn more about clouds in my other articles: 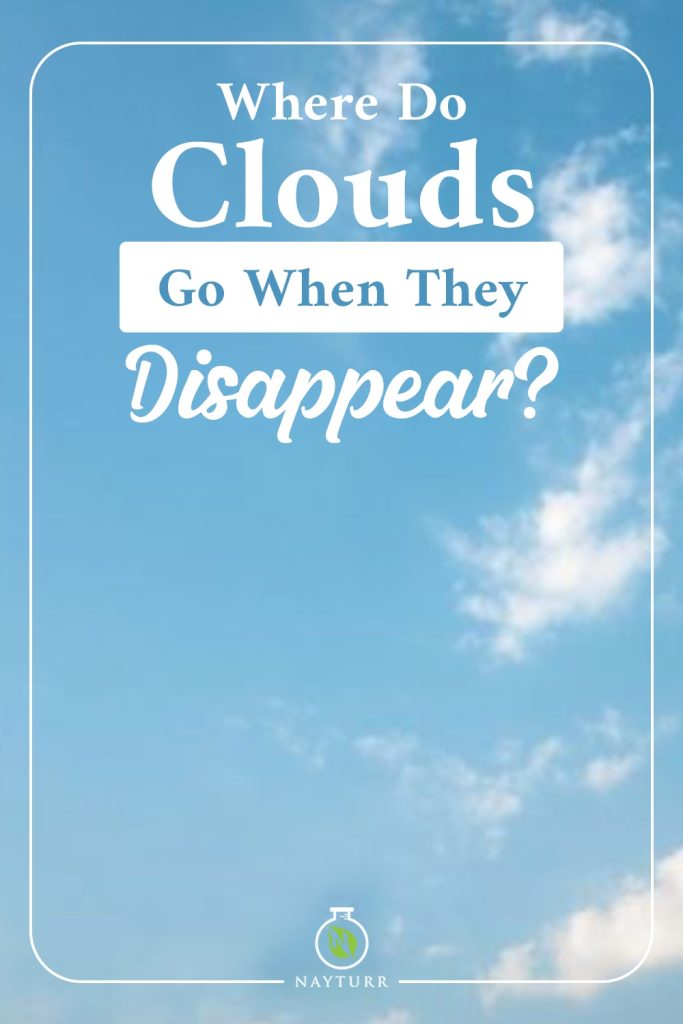