House plants and gardens are increasingly popular. They’re a great way to brighten up your home, improve the air quality, and develop a hands-on hobby that keeps you focused on something besides screens.

When you keep plants and gardens, it’s important to know what to feed them so they can get all the nutrients and minerals they need.

But do you know why certain types of soil are better for plants? Read on to find out why volcanic soil, also known as andisol, is incredibly fertile.

Some Facts About Volcanic Soil

Volcanic soil is typically very dark in color, giving it its second name, andisol. This term comes from the Japanese words for black soil. Many farmers will tell you that darker soils are healthier and more fertile for plants, so it’s no surprise that this near-black material is known for this quality!

Volcanic soil is one of the rarest types of soil in the world, accounting for only around one percent of ice-free land area in the world, and less than two percent of the soil cover in the United States. There are eleven other types, or orders, of soil.

Volcanic soil is categorized by how weathered it is – meaning how long it’s been on the earth’s surface, allowing natural processes to break it down and allowing the plants in the area to pull nutrients and minerals from it.

Volcanic soil can be found over hundreds of miles from the site of a volcanic eruption since clouds of ash and airborne pyroclasts can travel for long distances and settle far from their initial volcanic site.

You may have noticed that certain parts of the world, which are near volcanoes, are especially lush and fertile. For example, areas of Italy that are close to the famous volcano of Mount Vesuvius are famous for their incredible volcanic wines.

Mount Vesuvius is best known for its eruption in 79 A.D. which buried the ancient city of Pompeii under twenty feet of ash and pumice.

Today, long after this massive eruption, the local area is bathed in volcanic soil. When grapes are grown in this andisol, they soak up unique minerals, making wines with great depth of flavor that have made the region famous.

Volcanic soil is also very prevalent in Hawaii, where their volcanic islands are covered in lush, green jungle plants.

Although Hawaii is still prone to volcanic activity, their eons of past eruptions have ensured that the mountainsides are fully prepared to feed and nourish all types of plant life.

The North Island of New Zealand is another part of the world where volcanic soil has contributed to verdant, fertile pastures.

Volcanic loams from eruptions over forty thousand years ago are present in the Waikato and the appropriately named Bay of Plenty areas of the country. This leads to excellent pasture growth for sheep and cows, as well as successful agricultural development.

How Is Volcanic Soil Formed?

Volcanic soil, also called andisol, forms after a volcanic eruption deposits a layer of ash, pumice, and igneous rock over the area affected by that eruption. Although the initial eruption can be devastating to live in the region, over time a process called weathering breaks down the volcanic materials into dirt and soil.

When a volcano erupts, it sends things called pyroclasts into the air. These are particles of cooled magma that fall down onto the ground due to gravity. Pyroclasts can take various forms, such as flakes or solid stones.

Once all this volcanic material has fallen down and formed a layer on the earth, it becomes a type of ground cover known as tephra.

When the tephra is exposed to time and the elements, it breaks down into the soil, but it still contains all of the materials that were initially present in the magma that spewed from the center of the earth to create it.

One of the processes that help break down the tephra is wind. When the wind blows small particles of sand across the surface of a volcanic layer, it acts like sandpaper, breaking off more small pieces and helping to turn the hard, solid rock into rich volcanic soil.

Another thing that can turn tephra into the soil is water. When water flows over a solid rock surface, it wears away at it, removing small bits that then become andisol. Finally, plants themselves can play a part!

When seeds fall into cracks in the tephra layer, the action of their roots helps break apart the rock and forms even more opportunities for plants to grow.

Sometimes, if the volcano that formed the tephra layer is still active, new pyroclasts will fall down, creating new layers of tephra. This can help geologists understand the history of the region, and it also helps the volcanic soil continue to form and maintain its fertile qualities.

This process, however, takes a very long time! Some of the richest volcanic soils on our planet were formed by eruptions that took place before humans lived on earth. So if you’re hoping for volcanic activity to help speed along with the growth of a forest, we’re sorry to say that you’ll be waiting for a few millennia.

What Makes Volcanic Soil So Fertile?

Volcanic soil is formed from the magma that comes deep from within the earth, where hundreds of different minerals are present.

Because these materials came directly from inside the earth, they did’nt have time to lose their minerals and nutrients to natural processes and are chock-full of everything a little rock needs to feed a plant.

Most of the minerals included in volcanic soil are non-crystalline. Other words for this geologic concept include mineraloid or amorphous. All this term means is that the mineral does not have an ordered crystal structure.

Some of the non-crystalline minerals most commonly found in volcanic soil are allophone and imogolite. Iron and aluminum minerals in their amorphous state are also found in many andisols, as well as calcium and magnesium. This makes volcanic soil act like a multivitamin for your plants, helping them grow healthy and strong.

To learn more about minerals, check out our article “7 Different Types of Geodes”

Because of their unique qualities, non-crystalline minerals are able to form strong bonds with organic matter, like plants and seeds.

Volcanic Soil Is Soft And Easy For Plants To Break Down

Another thing that makes volcanic soil so fertile is the brittle, glass-like texture of most volcanic, or igneous, stones. We all know how easy it is to break glass! Because the rocks formed after a volcanic eruption are silicate, meaning formed like glass under immense pressure and heat, it’s easier for the powerful minerals inside those rocks to be broken down and immediately available within the environment.

When plant roots come into contact with these minerals in the soil, they are able to receive the nutrients from those minerals that they need in order to grow strong, green, and lush. This means that plants can receive more minerals and nutrients from volcanic particles that are heavily broken down into fine particles.

Less weathered andisol will be harder for plants to benefit from – however, it has the advantage of being able to slowly break down over time, keeping the soil nice and fertile into the future.

Where To Buy Volcanic Soil

Now that you know what makes volcanic soil so fertile, you might be planning a trip to Hawaii or New Zealand just to scoop up some andisol for yourself. But don’t worry! You can buy volcanic soil at your local plant nursery, or even order some online!

Build A Soil lets you create your own custom organic fertilizer that includes volcanic soil such as their Azomite, which contains over seventy trace minerals and nutrients that plants need.

Cinderite is a volcanic soil additive you can in gardens, landscaping, and potted plants.

Mother Earth Volcanite is enhanced with pumice and has plenty of porosity to keep plants healthy and air out their soil.

Bonsai Jack Lava Rock has the dark black color that gives Andisol its name and can be used on its own or as an additive to improve existing soil. (To learn more about soil, check out our article “Bonsai Soil Information and How-to: What is Bonsai Soil Made Up Of”) 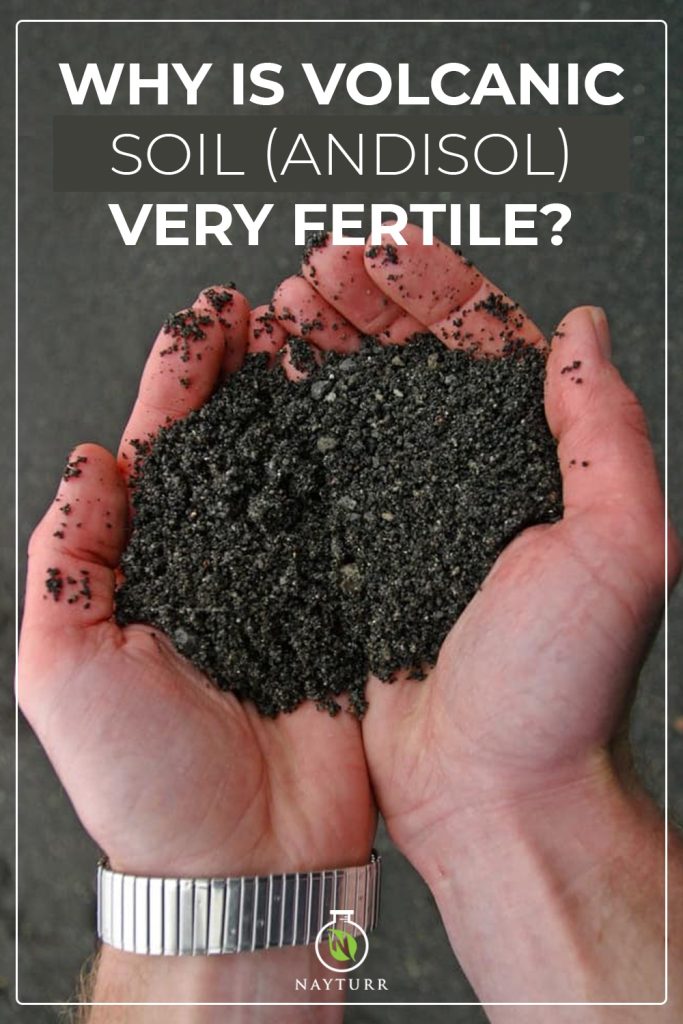