Did you know that there are more than 100 types of clouds? Yes, you read that right!

Research conducted by the World Meteorological Organization’s International Cloud Atlas concluded that clouds come in a wide range of variety, having different colors, shapes, sizes, and heights in the sky.

This pretty much sums up the fact that most clouds are different from another; some of them are bigger and grayer in color while others are small and as white as snow. But that’s not it. Clouds happen to be in such various kinds that it is, indeed, worth learning about them.

Whether you love looking at the sky and watching the clouds go by or just love learning new things and increase your own knowledge, you will find this blog post quite interesting and insightful. Here we have discussed in detail about different kinds of clouds that you probably didn’t know exist!

The Three Main Types of Clouds

At some point in time, you may have looked at the sky and may have wondered what clouds really are and how they come to life. Clouds are the accumulation of tiny drops of water or ice crystals. Mind you, these water droplets/crystals are too small to be visible to the human eye.

For more detailed information about the formation of clouds, check out our article here.

Clouds are further divided into 10 types as high-level clouds include cirrus, cirrocumulus, and cirrostratus; middle-level clouds consists of altocumulus, altostratus, and nimbostratus; and low-level clouds comprises of stratus, cumulus, cumulonimbus, and stratocumulus. Let’s look at each one of them in detail below.

Cirrus clouds are the most common types of cloud that are visible all year long in every season. Their distinguishable feature includes fine, thin texture, found at the highest altitude of the sky, between 16,500 ft to 45,000 ft.

Due to their wispy feature, they have been named after a Latin word “cirrus” which means a ringlet or curling hair locks. What makes cirrus clouds more distinguishable is their bold red and yellow shade that naturally appears before the sunrise and after sunset.

Sometimes called as “mackerel skies”, cirrocumulus clouds are claimed to be the most gorgeous clouds ever. Their white round fluff expands out for miles over the sky, looking mesmerizing to a viewer.

Both of these clouds may look similar but they aren’t the same as altocumulus clouds are found at lower heights than mackerel skies.

Cirrostratus clouds are light veil-like white clouds that cover almost the entire sky. An ideal way to differentiate cirrostratus from the rest of the clouds is by looking for a “halo” surrounding the sun or moon.

Appearing in colors ranging from light grey to pure white, this type of cloud is so semi-transparent that most of the time the sun or moon peers through it. Studies show that cirrostratus clouds transform into altostratus clouds if they slide down to a lower height.

Here’s a fun factoid for you all – these clouds always travel in the western direction and their presence in the sky indicates the chances of rainfall in the 24 hours.

Altocumulus clouds are the most common clouds in the middle stratus of the sky and emerge out in the skies all over the world. They are usually visible in white or gray colors, extensively spread out all over the sky.

To be more specific, they look like a sheep’s wool, which is why they are also called “sheep backs”. It has been observed that when altostratus appears with another type of cloud, change in the weather follows, resulting in a heavy storm.

Most typically, altocumulus clouds are formed with the help of cumulonimbus – the type of cloud that is known for causing a thunderstorm.

Mostly linked to drizzle and snow, altostratus clouds are known for scattering all over the sky for thousands of square miles. Owing to their simple grey texture, these types of cloud are regarded as “boring clouds”.

While they can cause rainfall, one may think of them as considerably heavy and thick. On the contrary, they are quite thin in appearance, allowing the sun or the moon to cast its beam. When the rain falls from altostratus clouds, these clouds instantly transform into nimbostratus clouds.

The word “nimbostratus” is derived from the Latin word “nimbus” which literally means “rain” and stratus is for “spread out”. These clouds bring along rain with themselves, forming thick cloud layers that end up blocking the sun or the moon. Nimbostratus belongs to the mid-level sky but sometimes they alleviate to a lower altitude.

These clouds are usually found in grey or black colors, as they bear excessive moisture. As the water content increases, these clouds get darker and darker, eventually bursting into a heavy rainfall.

When the earth’s surface is heated by the sun, the air begins to absorb heat and water vapor, and starts to rise in the upward direction. The temperature falls down as the air rises and as a result, nimbostratus clouds are successfully formed in the sky. However, these clouds are unable to hold the rising water and release it in the form of rain.

Stratus clouds usually consist of thin white layers that cover a large part of the sky. These clouds are also observed at a close approximation from the ground in the form of mist or fog. If these clouds are warm, then it indicates the possibility of rain but if these clouds are cold, it means snowfall is abound.

Usually, these clouds are like a paper-thin blanket that is covering the whole sky, especially when they hang low. As it must be evident by now that clouds can be a combination of two or many types, similarly stratus clouds can be both strato-cumulus clouds and strato-nimbus clouds as well.

The latter type causes rainfall while the former expands all over the sky like cotton candy over the sky.

Imagine thick, fluffy wools piled up over one another – that’s what cumulus clouds look like. Cumulus clouds are the type of clouds that everyone learns to draw at an early age. They are prominent, well-defined, and round-edged white clouds that signal a sunny and clear weather.

The bottom side of cumulus clouds differs largely from their top section as they are relatively flat and darker in color. However, these clouds may give way to light rainfall but that’s a rare occurrence.

What makes this type of cloud different from the rest is that they come in a vertical position, with the base potent reaching up to eight kilometers.

This is the reason why cumulonimbus is known as a towering cloud, and at times, regarded as both low-altitude and high-altitude cloud. Like cumulus, cumulonimbus clouds are exceedingly fluffy and gleaming white.

Generally, cumulonimbus clouds are observed during the afternoons of the summer and spring season when the Earth tends to release heat.

Stratocumulus clouds are produced from a prominent layer of stratus that gradually breaks apart. These clouds typically indicate a change in the weather condition. Normally, they are found in all kinds of seasons and can be categorized into four forms – stratocumulus stratiformis, stratocumulus cumulogenitus, stratocumulus castellanus, and stratocumulus lenticularis.

Readers must note that all the cloud types that are discussed above are a broad classification as each type of cloud can be further caste into different categories and varieties. These categories and groups are specifically named and classified according to the particular property of the cloud in question. 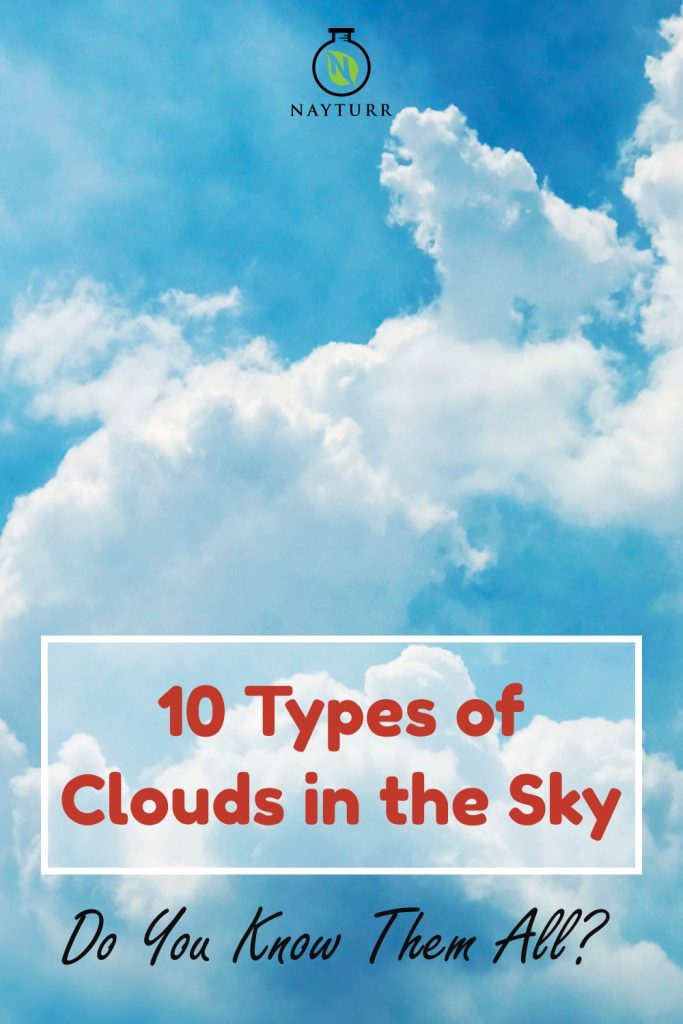