You don’t always find lobsters in the water. They can be seen scuttling across the shore, clambering over rocks, and if you didn’t secure your pet lobster’s tank, you might find them hiding in your bookcase. So can lobsters really survive on land?

Lobsters can’t really survive on land. However, they can extract oxygen from the air if their gills are moist. Because of this, they tend to only survive out of water for a span of one to two days. A lobster’s time out of water can be extended if kept in cool conditions and continuously moistened.

Lobsters have gills that will collapse if they become too dry, making them unsuited to a whole life on land. But that doesn’t mean always keeping them in water is best. Situations, such as transporting lobsters, are more successful with the lobster out of the water, provided it is done correctly. Cool and moist is a lobster’s happy place.

How Do Lobsters Get Oxygen?

Lobsters may be the cockroach of the sea, having more in common with many insects than your average fish. But lobsters still have gills, which makes an entire life on land deadly. Gills extract oxygen from water. Cooler seawater has higher oxygen levels than warmer, which is why the average lobster best enjoys temperatures between 61-64F (16.1-17.7C).

However, while most fish will die within ten minutes outside of water, lobsters can continue to live for up to forty-eight hours. This is because lobster gills are adapted to extract oxygen from the air if their gills are moist.

The lobster helps keep their lungs from drying out by excreting a liquid over their gills. How long the lobster can do this depends on the climate. Hotter and drier environments are best avoided.

FUN FACT: You can help a lobster to keep its lungs moist by providing a cool and moist environment. However, spraying them in the face with a bottle of seawater isn’t going to help. A lobster’s five pairs of gills are attached to its legs.

Transporting them in towels that have been dampened by seawater will assist the lobster’s breathing. It is actually safer to transport them this way, as keeping them in a tub of seawater risks running oxygen levels in the tub being depleted. This is why any lobster kept in tanks requires aeration.

Lobsters Can’t Scream: This is a Myth!

The screaming of lobsters as they boil in a pot is a myth. Lobsters can’t scream. They can’t talk, either. As mentioned previously, lobsters have gills, not lungs, and they are located in their legs. Thus, a lobster has no vocal cords and, consequently, is without a voice.

Lobsters are not noiseless, however. The American lobster can make a noise by quickly contracting muscles in its head. Crayfish, such as the Spiny Lobster, can play their own built-in violin.

They use a piece of tissue called the plectrum and rub it against another tissue located under their eye. However, it sounds closer to a squeaky hinge than the music made by a concert violinist.

Scientists don’t think Spiny Lobsters make noise to communicate, however. For starters, they’re pretty sure Spiny Lobsters don’t have ears. Instead, they believe the noise is made as a type of defense to discourage predators from approaching.

So why do you hear “screaming” when a lobster has been tossed into the pot? It’s actually air. When the creature hits the boiling water, the air expands, becoming forced from the body and shell of the lobster.

While lobsters don’t have vocal cords and even may lack ears, they still have ways of communicating. To do this, they make a message with various chemicals. This message is then shot out through a nozzle located underneath their eyes.

All of which sounds really cool until you discover that the “chemicals” they are using are urine! Yes, lobsters pee out of their face, drawing urine from their two bladders located on either side of their heads.

Have you ever wondered if a lobster would make a good pet? Check out my article here to find out more!

The messages lobsters send are thought to be pretty straightforward. Roughly translated into human speech, their pee-grams are:

“Saving fish from drowning,” is a Buddhist proverb made famous in a book by Amy Tan. But lobsters can’t really drown, can they? After all, they don’t have lungs. Then again, they can breathe on land for up to two days. So what’s the answer?

A lobster will suffocate even if it is kept in seawater at the proper temperatures if the water’s oxygen has become depleted. This is why putting them in a sealed tub of still water is terrible.

However, you can aerate freshwater all you like; if you put lobsters in it, they will “drown.”

Why Freshwater is Bad for Lobsters

With lobsters being able to breathe underwater and on land, it seems reasonable to wonder why they can’t happily live in freshwater. In this, lobsters are a lot like fish, and it has to do with osmosis.

Osmosis is basically when a liquid such as water moves through the membrane of a cell. The membrane of the cell, aka its wall, is semipermeable. This means the cell’s wall lets some stuff in and keeps some stuff out.

But this only goes well if the flow between what goes into the cell is regulated. If too much gets past the cell’s wall, the cell will swell up and possibly burst. This leads to death.

“But I’ve seen lobster in rivers,” some claim. “They live in freshwater just fine.”

No, these people have not seen a lobster living happily in a river. Although, to be fair to these folks, this mistake isn’t due to too many beers while fishing. The reason people think they see lobsters in rivers and other freshwater is because of crayfish and crabs.

Lobster and crayfish are related (although how closely is debated), and some crayfish look very similar to their relatives. However, it is more confusing because you can’t rely on the common name to tell if it is a lobster or a crayfish. Take the Red Lobster, for example; it’s not a lobster but a crayfish (true story).

NOTE: Wondering how you can tell if it’s really a lobster? Check out my article here about the different types of lobster.

Then there is the matter of Squat Lobsters. They are not lobsters, nor are they crayfish. If they are anything, they are similar to porcelain and hermit crabs, although not precisely. They are typically colorful. Some are hairy, and a few varieties can be kept as pets.

This article has helpful diagrams on the difference between a lobster, crayfish, and a squat lobster.

Climate change isn’t great news for lobsters. The world’s oceans are shifting with the changes in our climate, impacting ocean currents, the water’s pH levels, and the water’s temperature.

We already discussed above that the lobster’s gills find it easier to extract enough oxygen in cooler water. However, the fluctuation in sea temperatures also impacts the larval phase of lobsters, and some varieties, such as the Spiny Lobsters, are particularly sensitive to this.

When observing American lobsters found in the East Coast, scientist found that a water temperature increase of only five degrees Fahrenheit (2.7 degrees Celsius) causes baby lobsters to develop faster. While a faster development sounds positive in regards to surviving predators, most of the larvae were failing to endure the accelerated growth.

At present, rather than the lobster species dwindling, lobsters are simply moving their territories further up the coast. Thus, the state of Maine has seen its lobster fishing industry rise over the last two decades, while the opposite happened to the lower states such as New England and Rhode Island. The concern, however, is that there is only so much further up for lobsters to go.

Climate change is causing a rise in lobster diseases. Part of this is due to the warmer water changing when lobsters molt. Molting is essential to lobsters being able to grow and is also, in a way, their Achilles heel when it comes to immortality.

Lobsters have what’s called “biological immortality” due to their bodies never going through senescence. Senescence is what we call aging, the gradual breakdown of our bodies as we begin to wrinkle, crack, stoop, and go grey. Since lobsters don’t “age,” they theoretically could live forever. Except they can’t.

DID YOU KNOW? Lobsters don’t stop growing! Their shells, however, don’t grow. Thus, each time a lobster’s body grows too big for its shell, it has to molt.

Lobsters use a lot of energy to make brand-new exoskeletons. A lobster eventually reaches the point where it can’t make enough energy to form a decent shell. Even if they don’t die from exhaustion, the lack of a proper shell is a problem. They need the shell to fight off predators and disease.

Even smaller lobsters are vulnerable to disease when they molt. As ocean waters have warmed, lobsters have started molting earlier. This gives diseases more opportunities to infect lobsters causing greater numbers to succumb.

Crustaceans, the Ecosystem, and the Food Chain

Lobsters will even eat other lobsters when food is scarce. This cannibalistic trait used to only be witnessed when lobsters were in captivity. However, as of a decade ago, there has been a dramatic rise of lobsters eating other lobsters in the wild. The root of the problem is once again the rise in sea temperatures caused by climate change.

We’ve looked at how well (or not) lobsters can survive on land, communicate, and even how they are handling climate change. But there’s more to being a lobster. Here are five more lobster facts.

So, Do Lobsters Have a Chance at Life on Land?

Lobsters may not be able to survive on land for extended periods, but they are survivors. Their ability to defy aging makes them hardy, even though they are a source of food for both us, other animals, and marine life.

Unfortunately, climate change is causing problems for our fellow crustaceans. How well and how long they’ll be able to survive remains unclear.

While there is no denying the impact of climate change on lobsters, the ecosystem, and the food chain within it, science is still uncertain of the full ramifications climate change will have on lobsters. With time, however, will come more answers. 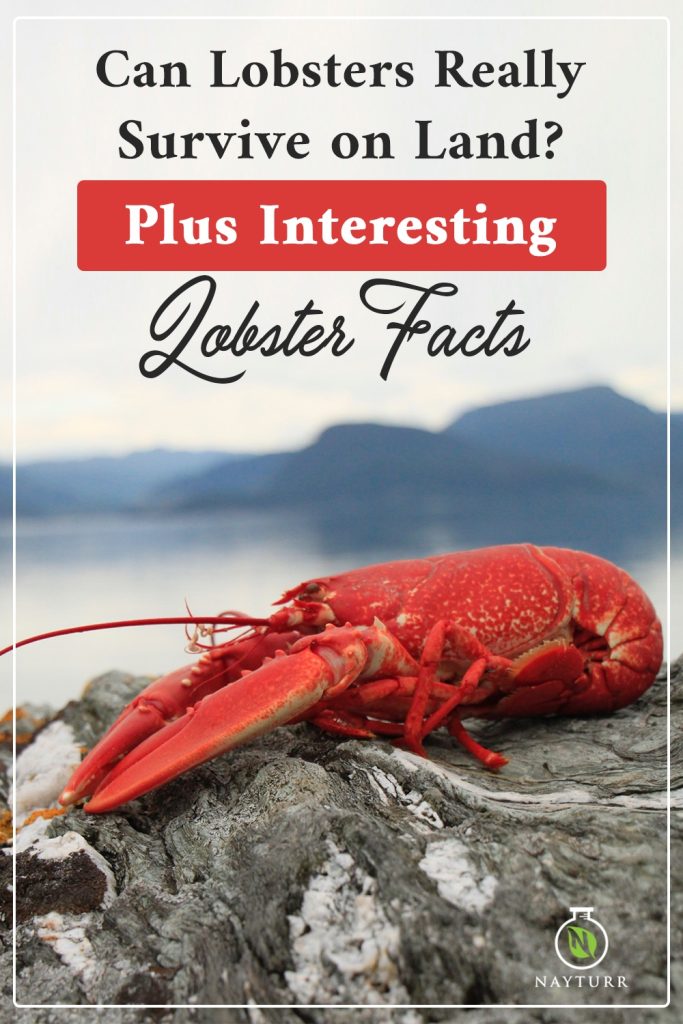