Animals you don’t see every day can instill a certain sense of awe, wonder, and of course, curiosity. As such, a trip to the zoo carries a unique charm, where you can marvel at these unusual animals and entertain the questions that pop up in your mind. Such as, “Can you ride an ostrich?”

This is a question that I pondered myself recently, and luckily one of my adventurous friends had an answer from her time vacationing…

You can ride an ostrich. In fact, it’s a tourist attraction in some parts of the world, namely in:

However, the practice has been in steady decline for years due to the harm it causes the ostriches.

Here’s a video of ostrich riding in action:

If you’re interested in learning more about ostrich riding, how it affects the birds, and the journey the practice has taken over the years, keep on reading!

Ostriches are the world’s largest bird. Standing tall at an average of 7 to 9 feet and weighing around 220 to 350 pounds, it makes sense that they’d be able to accommodate a human sitting on their feathery back, right?

It’s true, but only if you’re under a certain weight and size, you can indeed ride an ostrich. It’s not advisable to approach them in the wild, but you can find the opportunity to ride them at ostrich farms, such as the Highgate Ostrich Show Farm in Oudtshoorn, South Africa, and Maasai Ostrich Resort & Farm in Nairobi, Kenya.

If you find yourself with the opportunity to ride an ostrich, always listen carefully to the handlers. Typically, the attendant will put a cloth bag over its head to make it calmer before you’re allowed on.

Once the ostrich is ready, you can climb up and sit on the ostrich’s feathery hump. Lean back slightly to balance yourself. It’ll be very different from riding a horse because ostriches balance on two legs.

To ensure you don’t fall off while riding, you can hold onto its wing pits. Gripping its neck is both unsafe and uncomfortable for the ostrich.

NOTE: A typical ostrich ride at a farm will only last a few minutes or less.

A Brief History of Ostrich Riding

We’ve had interactions with ostriches as far back as the late Pleistocene period, around 11,000 years ago. Early humans hunted them for their meat and eggs, the latter of which being particularly useful as carrying containers for water due to the strong shells.

During the Bronze Age, roughly 5,000 to 3,000 years ago, ostriches were kept in captivity for the first time in areas like:

The first evidence of ostrich riding dates back to this period, around 3,000 years ago, specifically in Kish, a Sumerian city.

Years later, ostriches were first (partly) domesticated sometime in the mid-19th century, in South Africa. Ostrich farms were started primarily for harvesting their feathers, as they were a valuable resource.

Over time, farms began offering ostrich rides to visitors as an additional source of income. This practice became very popular, especially in the city of Oudtshoorn, South Africa, which became known as the “ostrich capital of the world.”

In the U.S., ostrich riding became a popular tourist attraction in Florida in the late 1800s. This eventually led to the sport of ostrich racing becoming invented around 1890. Ostrich races still remain relatively popular, with races being held in the U.S. and several other countries annually.

In recent years, ostrich riding has been on the decline due to concerns over the birds’ well-being. It has even been banned in some countries.

Is It Cruel To Ride an Ostrich?

Simply put, it can be cruel to ride an ostrich. In the wild, they have zero reasons to carry passengers around. As such, their bodies aren’t built for it. They’re powerful birds, yes, so they can carry someone on their back, but that doesn’t mean it won’t cause them strain.

Once or twice in their lifetime would likely be fine, but an ostrich used as a tourist attraction will have to carry many people over the years.

In the short term, it can cause them pain. In the long term, it will strain their hollow bone structure and cause it to weaken significantly. This damage to the bone is permanent and leads to death in severe cases.

Riding an ostrich carries dangers not only for the ostrich but also for the rider. They’re not the most friendly birds, so you need to get them to warm up to you before you’re allowed to get on.

Don’t ever provoke an ostrich intentionally. Their legs are formidable weapons, tipped with long, sharp claws. Their kicks are capable of killing predators in the wild. And they are more than capable of disemboweling and killing humans, too.

FUN FACT: Ostriches can sprint up to 43 miles an hour, capable of covering 10 to 16 feet in a single stride with their powerful legs. When they’re running over long distances, they can still maintain a speed of 31 miles an hour.

This means that if you fall off while they’re going at high speeds, it’s essentially the same as falling off a moving car!

How Much Weight Can an Ostrich Carry On Its Back?

An adult ostrich can carry up to 198 pounds or 86 kilograms on its back.

To help lessen the strain on the ostrich, the few ostrich farms still in operation have strict weight limits for guests. If you want to ride an ostrich on a farm, you have to weigh less than 163 pounds or 74 kilograms.

On some farms, this weight limit may be even lower. You’ll notice that the weight limit is less than the ostrich’s actual carrying capacity.

TIP: If you really want to ride an ostrich but don’t qualify for the weight limit, just accept that you should avoid it for the ostrich’s sake. Be honest about the weight to ensure you and the ostrich are safe.

Can You Ride an Ostrich in the USA?

Ostrich riding is no longer a popular tourist attraction in the USA. You’ll have to travel to other countries to experience it yourself.

If you just want to see someone riding an ostrich, however, there are many ostrich races in the USA you can watch. Here’s the list for 2022:

TIP: If you just want to observe some ostriches, you can also visit an ostrich farm in the U.S. Some farms allow visitors and will even allow limited interaction with the ostriches.

Can You Train an Ostrich To Ride It? If So, How?

Ostriches can be trained, but it’s not advisable for the average person. Training is best left to ostrich farms that have the experience and resources to safely raise an ostrich.

Some may want to keep them as pets. First, you need to get a permit to raise one, and second, they grow quickly from adorable chicks to huge, powerful adults with wicked-sharp claws and bad temper.

REMEMBER: Even a trained ostrich at a farm can pose a danger. At their core, they’re aggressive and temperamental, no matter how trained.

Ostriches are majestic creatures, being the largest species of bird in the world.

Ostrich riding used to be a popular tourist attraction in many countries, but today only a few farms still allow visitors to ride. This is because constant riding can put a heavy strain on the ostriches’ hollow bones, which affects their quality of life and can even lead to death.

In addition, it’s dangerous for people to ride ostriches due to their bad temper and powerful legs and claws. If you want to appreciate ostriches safely, opt for visiting an ostrich farm or a nearby zoo. 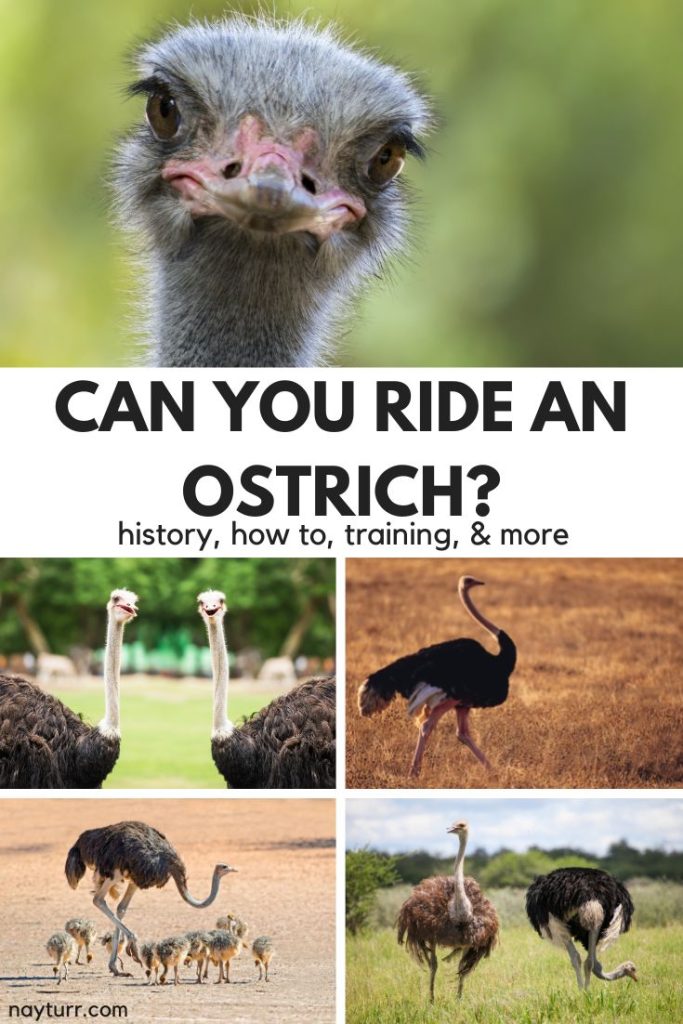