We’ve employed many types of animals to help us move around, such as horses, donkeys, oxen, camels, and dogs, by either riding them or using them to pull carts and wagons. If you’re on the imaginative side, you might be curious if there are other animals we can use for transportation, such as the ever-lovable pig. I’ve pondered the same question during the time I volunteered at a farm. So, can you ride a pig?

Technically, you can ride a pig, although it’s not a common practice. Pigs aren’t built to travel long distances with added weight on their backs. In addition, many pigs won’t appreciate being ridden and may become violent. Even domestic pigs can cause severe injuries when you provoke them.

If you want to learn more about the logistics of riding a pig and more facts about pigs in general, keep reading!

Can You Actually Ride a Pig or Not?

In theory, you can ride a pig. Many of the largest domestic pig breeds can accommodate a human on their broad backs, such as:

These pigs are generally very athletic and powerful. They can sprint quickly, with mature adult pigs capable of reaching speeds of 11mph. However, they can’t keep this up for long, so any attempt you want to make at riding a pig in a race is doomed before it even starts.

In addition, pigs have a distinct physique that makes them near-impossible to saddle properly. Their broad, flat backs and short necks make it difficult to fit them for a traditional saddle.

The pig also needs to be big enough to accommodate a person on their back, which means their back will be significantly broad and even more difficult to fit a saddle around. Riding a pig may also interfere with its long-term skeletal durability because of the added pressure on its spine.

TIP: If you really want to feel the wind in your hair while you speed around on a mount, just stick to a horse or a car.

What Does It Take To Ride a Pig? Can a Pig Be Trained?

In the popular video game Minecraft, all it takes to ride a pig is a saddle, a carrot on a stick, and of course, a pig.

In real life, it’s a lot more complicated. Some pig species are large enough to accommodate a person sitting on their backs, but will they want to? If they take offense to someone riding them, you face a lot of danger.

Domestic pigs are typically docile, but when riled up, they’re more than capable of injuring a person by:

Trampling and kicking are a danger due to their heavy weight, but biting, in particular, can lead to severe injuries. Pigs have incredibly strong teeth and they don’t discriminate when eating — they’re even capable of eating human bones!

Once you get over the potential for danger, pigs do respond well to training. They’re highly intelligent and social animals, similar to dogs.

Training is best done when a pig is still a piglet, through structured and reward-based training that encourages simple behaviors.

NOTE: If a pig has been trained from infancy to be comfortable around people and accept weight on its back, and it has received regular exercise to strengthen its muscles, it could be possible to ride it.

Just keep in mind that while pigs can be trained to respond to commands, they lack the loyalty and reliability of dogs and horses.

While you can indeed ride a pig, we have many better options when it comes to a ride. Horses are the quintessential riding animal because they’re well-equipped for it.

Horses are incredibly adaptable and physically resilient, with unmatched stamina and power. Their backs have a slight dip in the structure, allowing a saddle to slot right in. Their long legs and necks give them additional maneuverability, and their intelligence allows them to respond favorably to training.

Hopefully, this guide has given you some new food for thought. No one’s going to stop you from riding a pig, but be aware that they’re not built for riding and acknowledge the danger they pose when agitated. Nevertheless, with the right training and the right pig, you might still be able to enjoy a few joyrides.

NOTE: If you’re wondering which other animals can be ridden, check out my article, “12 Animals You Can Ride, starting with the most unusual!“ 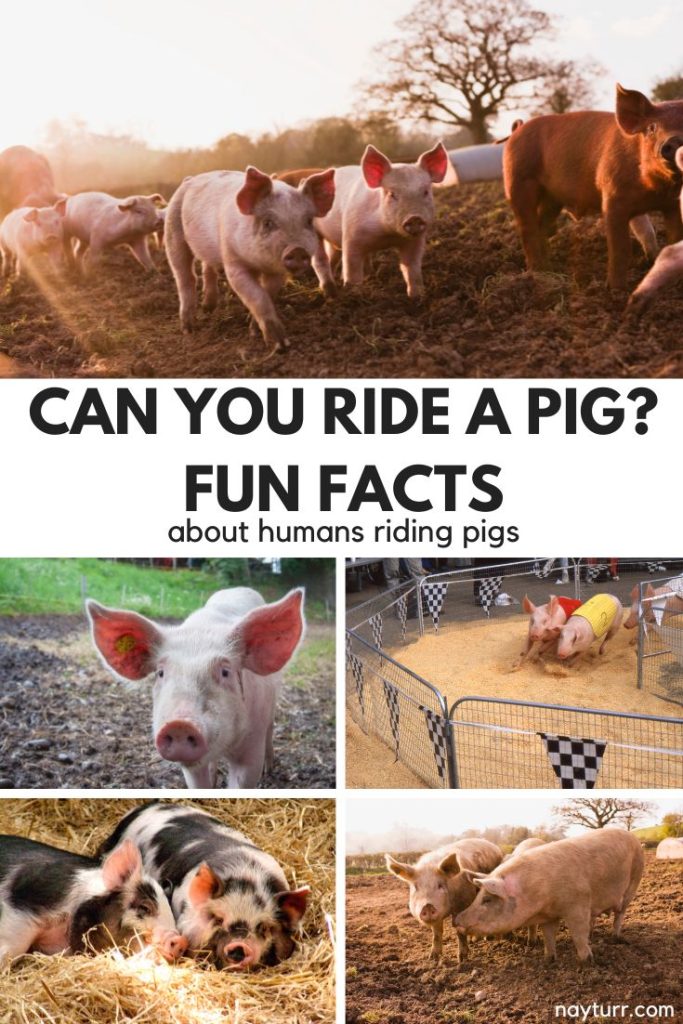