Have you ever found yourself at the zoo watching the majestic king of the jungle when suddenly the thought crosses your mind, “I wonder if I could ride one of those”? That is to ask, is it actually possible to ride a lion the way one might, say, ride a horse?

Technically speaking, you can ride a lion. However, it requires a huge amount of specialist training, and be in an environment where they are being instructed by their handlers. It is also only every done in the context of education/entertainment purposes, & not for the purpose of domestication of the lion.

After years of working with lions and having had the privilege of taking care of these wild animals from the time many of them were cubs, I can confidently say that lions are amenable to human presence, meaning that with the right training, and the right environment, they can be trained.

It’s a surreal situation to be face-to-face with these majestic animals and realize the sheer power they have in their body. It’s a very humbling, yet empowering, experience. So much so that I’ve never been in a situation that evoked the same set of emotions within me in my entire life as I have had when in the presence of these great beasts.

Okay, but Can You Ride a Lion?

Yes, technically you can ride a lion. However, riding one is not something that can be accomplished overnight, even with the help of a really good trainer or an extremely docile lion.

After all, lions are still wild animals even if they’re familiar with the presence of humans from the moment they were born. Lions can be tamed and made to follow the instructions of their handlers or trainers.

NOTE: Taming a lion is significantly different from domesticating your average housecat.

Dogs and cats become domesticated creatures by way of a change in their genetic makeup, allowing them to become familiar with the presence of humans and live peacefully with us.

This is not true with lions and most other wild animals. The innate genetic makeup of a lion does not have centuries-worth of domestication bred into their DNA. Even those lions living in captivity around the world have had a history of species-specific dominance as far back as these jungle cats have existed.

REMEMBER: Lions can revert to their wild tendencies if triggered to do so by feeling threatened or even just hungry.

For better or worse, lion taming is typically done for educational and entertainment purposes, with some of the earliest lion tamers working as part of the circus. The owner of the Great British Circus, Marcus Lacey, has been known to work with lions on stage by effectively commanding them to perform in front of an audience.

Famous “lion whisperer” Kevin Richardson is also a notable personality and a respected resource when it comes to lions. In fact, to answer the question that brought you here in the first place, documentaries featuring Richardson have shown him riding one of these giant beasts—proving once and for all that lions can be ridden.

NOTE: Riding a lion is only done for display purposes. They are not used as a means of transportation.

Lions, despite their strength and size, spend most of the day sleeping and lounging about. In fact, despite being quick sprinters with an average running speed of 80 kilometers per hour, the fact that they spend as much as 18 hours per day at rest doesn’t make for a long-distance runner. Like domestic cats, lions spend the bulk of their life asleep or at rest.

If riding a lion is on your bucket list, there are a few things you should know before seriously trying to accomplish this goal.

What Does It Take To Ride a Lion?

To start, riding a lion requires the beast to have a sense of familiarity with the potential rider. A good bond with the lion in which the lion feels a sense of trust and does not feel threatened is key.

NOTE: Like most wild animals, the lion is unlikely to trust anyone it perceives to be a threat and will fight hard if such is sensed.

Putting all your weight on a lion when tactile is seen as a threat and could therefore cause the lion to fight back and lunge at you. There have been cases of lions mauling individuals, even their owners when provoked.

REMEMBER: Riding a lion should be done in steps by allowing the lion to first become familiar with the person’s touch slowly and over time.

How To Train a Lion

Lion training or taming has evolved nowadays to include more humane methods than in the past. All interactions start with an introduction—typically at a safe distance and behind the bars of a cage.

NOTE: Similar to training dogs, lion tamers use a variety of techniques that include repetition, earning the animal’s trust, and positive reinforcement.

I find that patience is a crucial element when training a lion since these large cats still have feral genetics. Humane methods for lion taming involve introducing a few body parts at a time. For example, Henri Martin slowly entered a tiger’s cage through a series of repetitive actions.

One day, he put his hand inside the cage and did so over and over throughout the course of weeks. When the tiger was used to this, he began to include his arms up to his shoulders, then moved on to his feet, and so on from there.

While tigers are a different kind of wildcat, this method for creating a bond with the wild animal also works with lions.

Can a Lion Be Trained To Give Rides?

Yes. Lions are best trained through operant conditioning. It’s the same principle used in dogs where the animal is given a cue which is then connected to a particular behavior.

Performing the expected behavior creates the reward the animal anticipates and desires. In dogs, the cue is often the click of a clicker or the command word which can also be used for lions.

Using operant conditioning, a lion may be trained to give rides to people. However, it’s important to remember that these rides aren’t for everyone. In most cases, the “ride” command is possible only for one or two persons with which the lion is familiar.

NOTE: It is not recommended for the sort of rides that ponies give to children at petting zoos because regardless of the extent of training, the lion still needs to trust the person getting the ride in order to freely allow one to straddle him.

How Much Weight Can a Lion Carry?

Lions are incredibly strong and have the ability to drag around 2 or 3 tons of weight if they’re willing to do the work. While there’s no specific weight limit for riding a lion, it’s generally accepted that these animals are more than capable of carrying an adult human.

How Long Does It Take To Train a Lion?

There is no set period of time for successfully training a lion. Even years of taming may not be enough depending on the temperament of both the lion and the tamer. In fact, lion taming is often viewed as a consistent and repetitive process that requires reliable monitoring on the part of the trainer.

Has Anyone Successfully Ridden a Lion?

Yes, as stated above, there have been several individuals who have managed to successfully ride lions. As mentioned, Kevin Richardson has successfully carried out this feat after caring for and becoming familiar with lions during his work.

There are also circus trainers who managed to ride a lion during a show successfully. While it can be done and it’s definitely an experience of a lifetime, riding lions is not advisable, even for tamed lions. Wild animals remain unpredictable and capable of reverting to their feral nature if triggered to do so.

Related: If you’re wondering about which other animals can be ridden, check out my article, “12 Animals you Can Ride, starting with the Most Unusual“. 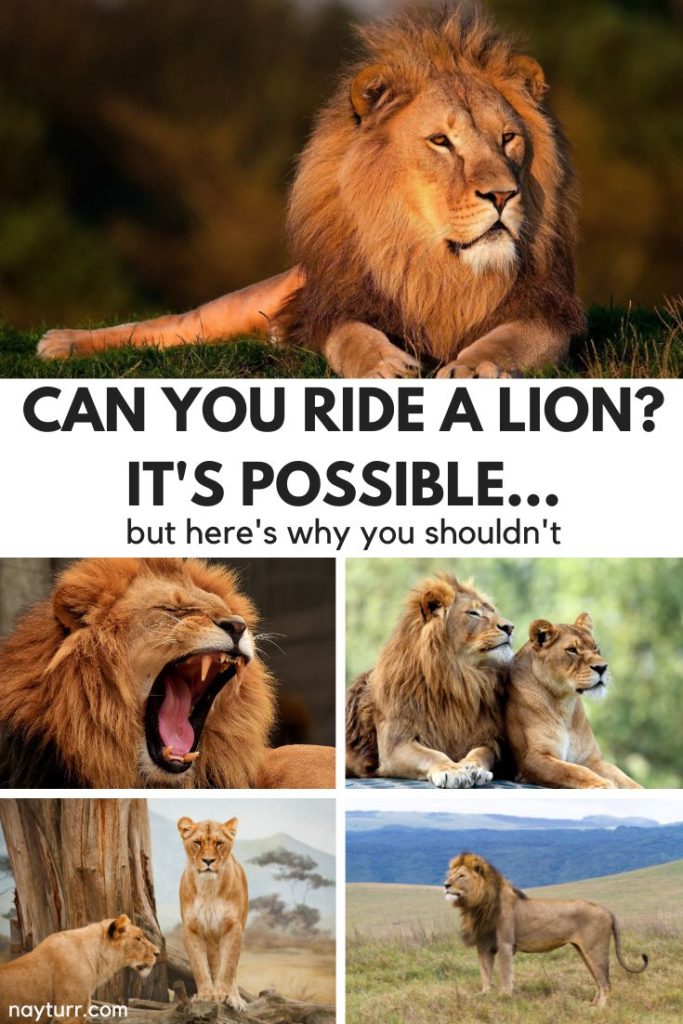