Have you ever wondered if you could ride a llama? Llamas have been used as pack animals for centuries, so it’s only natural that people today would want to know if they could ride them too!

Contrary to popular belief, llamas can be ridden! Although they are not commonly used as riding animals, it is possible to train them for this purpose. Llamas are very sure-footed, making good pack animals in mountainous terrain. They can also be used to pull carts or carriages.

If you’re interested in riding a llama, read on for some tips on how to do it!

Important Facts About Riding a Llama

Llamas can carry heavy loads – up to 25% of their body weight. Their weight ranges from 300 to 400 pounds (136-181 kg). This means that not all llamas can be ridden by adults, as it depends on both the adult’s and the llama’s size.

Llamas also naturally understand what they can and cannot carry. If you try to put too much weight on them, they will simply refuse to move. It is essential to listen to your llama and not overload them. Forcing them to carry more than they are comfortable with will damage their health.

Below 50 pounds (23 kg), children can ride some llamas. The size of the child and the llama will determine whether or not this is possible. As mentioned, llamas can carry about 25% of their body weight, so as long as the child is less than 25% of the animal’s weight, it should be alright.

In addition, some llamas have been trained specifically for children to ride. These llamas have undergone extensive socialization and training to be safe around kids. Children’s llamas are also typically smaller than regular llamas.

FUN FACT: Llamas have a specially made saddle designed for children. This saddle is smaller and has a horn in the front for the child to hold onto. It will distribute the child’s weight more evenly to prevent spine injuries for the llama.

How Do You Ride a Llama?

Now that you know you can ride a llama, how do you actually do it? Here’s how:

You are now ready to ride your llama! Hold the reins in your hands and gently pull on them to tell the llama which way to go. Have fun riding your llama, but be sure to stay safe.

5 Tips on Training a Llama

Llamas are intelligent animals and can be trained to do various things, including packing, loading, and even riding. However, training a llama to ride can be more challenging than other tasks. Below are some tips on how to train a llama.

The first step is socialization. Llamas are social animals and need to be around people to be comfortable with them. If you’re planning on riding a llama, you’ll need to spend time around them so they can get used to your presence.

The next step is the groundwork. This involves teaching the llama basic commands such as “come,” “stop,” and “stay.” This will help them understand what you want them to do when riding them.

Once the llama is comfortable with you and understands basic commands, it’s time to start saddling them up. It is essential to use a proper llama saddle that fits the animal correctly.

#4: Getting on the Llama

The next step is getting on the llama. This can be done by leading them to a mounting block or using their natural tendencies to get on their back.

Now that you’re on the llama, it’s time to go for a ride! Start with short rides around your property and gradually increase the distance as the llama gets more comfortable.

Tips and Warnings About Riding a Llama

Knowing how to ride a llama is one thing, but you should also keep some things in mind. Here are some tips and warnings you should always be aware of:

Can you ride a llama? Yes, you can! But there are some things you should know before getting on one.

Llamas are intelligent animals and can be trained to do various things, including packing, loading, and even riding. However, training a llama to ride can be more challenging than other tasks. Follow the tips and warnings above to stay safe while riding your llama. 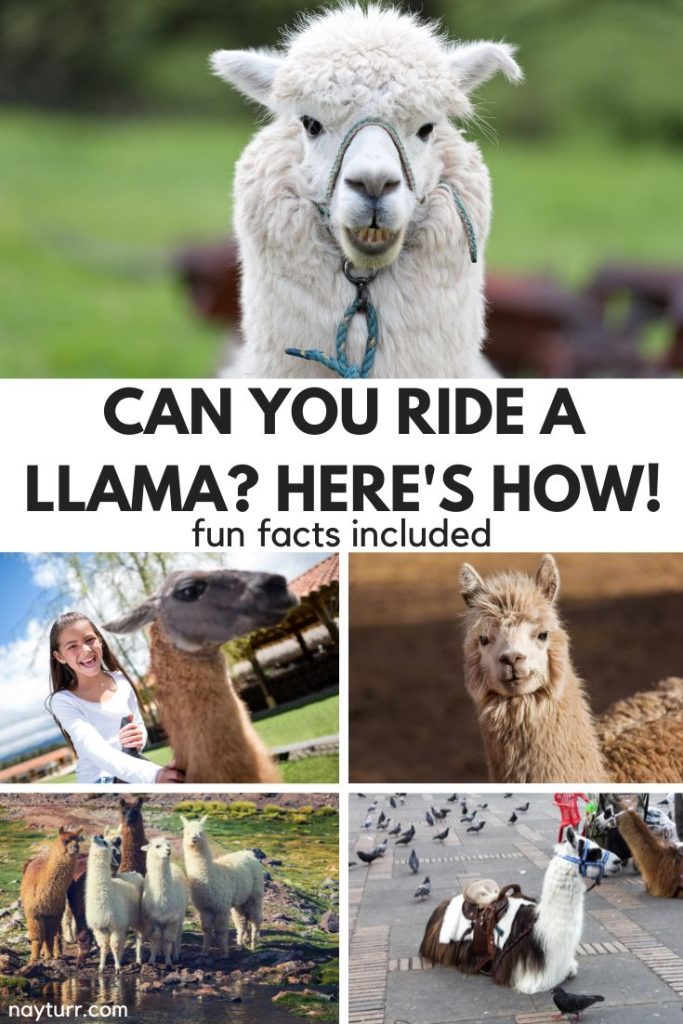