People have always shown a fondness for animals, and riding the bigger ones such as horses and camels tends to come naturally. Some people do wonder, though: Can humans ride giraffes? Is it even allowed?

While the giraffe isn’t a domesticated animal and its anatomy isn’t suited for riding by humans, it has been done by a giraffe-riding circus performer in Chipperfield’s Circus in the 1950s and again by a descendant in 2012.

So, although it’s not the norm, it is possible and it has been done! Keep reading to find out a whole lot more about how this seemingly impossible feat occurred!

Can You Actually Ride a Giraffe or Not?

For the regular folks with no giraffe-riding genes, getting on a giraffe is an impossible challenge. Anatomy-wise, giraffes are huge and difficult to mount with their overly tall physique, which can reach as tall as 20 feet. Their steeply sloped backs aren’t designed for riding, either.

Riding a giraffe is no easy feat. As mentioned, they are undomesticated, which means they aren’t used to working with humans, especially when used as a transportation option.

So, what does it take to ride one?

Riding a giraffe is uncommon but I can provide a number of theories that may help in learning the art of hypothetically riding a giraffe.

First, you need to have a giraffe. Giraffes are practically wild animals and not used to things involving human interaction, such as being displayed in pet shops.

Nevertheless, the first step to take is to buy a baby giraffe from where it’s allowed. A baby giraffe is preferable because it’s far easier to tame a baby than an adult.

NOTE: Since giraffes are exotic animals, you’d need a permit to purchase a giraffe. You’d also need to prepare feed and housing.

#2. Tame and Train the Giraffe

When you have your hypothetical baby giraffe, you’ll need to domesticate it and do so gently. The animal needs to learn how to be comfortable around you or the handler.

You also need to teach it to recognize basic commands. One basic thing it has to learn is to walk up next to a ramp you can use to get on its back.

#3. Teach the Giraffe To Ride

Teaching the giraffe this process is what I believe to be the most difficult part. In this crucial step, you’d need to learn how to mount it, sit on it without falling off, and steer it in the direction you want it to go.

NOTE: Ideally, a custom saddle has to be made to make sure you’re comfy and safe while you’re about 6 or 7 feet above the ground.

Does the Giraffe Need To Be Trained? If So, How?

Giraffes definitely have to be trained so they will do what they’re told to do. In getting a giraffe to follow directions, giraffe trainers use operant conditioning or instrumental conditioning.

Operant conditioning is a behavioral psychology concept involving reward and punishment for behavior. For every command followed, you give the giraffe a reward.

Training is often started while the giraffe is still a calf to make it an easily trainable animal. Some trainers begin interacting with them between 3 and 10 days of age and ramp up during the nursing stage.

NOTE: Training is done using a wand and hands-on manipulation. The goal is to train giraffes to overcome fear and not to overreact.

I believe training a giraffe is important to ensure the safety of both the animal and the handler. A trained giraffe is also easier to take care of, especially in relation to its welfare. An instance this would come in handy is when you’re grooming the giraffe and you have to keep it still.

Why Don’t We Ride Giraffes Generally?

Here are some reasons why riding a giraffe isn’t a usual occurrence:

When it comes to riding animals, giraffes are the types that are best left alone. Many zoos maintain them but don’t usually offer giraffe riding.

This is because they are exotic animals that aren’t bred with human interaction in mind and aren’t designed to be transporters.

Giraffes are too tall to climb on. A giraffe’s height is about 15 to 20 feet, with its neck alone measuring about 6 feet long.

That puts a rider up to 14 feet above the ground, which would risk a fall that’s almost like falling from the roof of a house.

#3: Risk of Injury or Death

Working with very large, very strong, and very fast animals can put your life in danger. It puts you at risk of a severe or fatal accident.

A giraffe can move really fast. When it gets spooked, it can dash forward quickly and throw off its passenger, who would likely get severely injured.

How Much Weight Can the Giraffe Carry?

Scientists have discovered that a giraffe’s body can support a weight of up to 2,200 lbs. One reason for their super strength is their unusually long legs that are designed to carry this much weight.

Fun Fact: Experts say that giraffes’ elongated bones account for half the length of their legs.

Weight is definitely not a problem with giraffes, and neither is power. In fact, their kicks are known to generate power that’s stronger than horses and kangaroos. A giraffe’s kick can produce an impact of 2,000 PSI (or pounds of force per square inch). This makes them one of the strongest animals alive.

So, can you ride a giraffe? Yes, with difficulty. It’s possible to train a giraffe and ride it as long as you start training while it’s still a baby.

While it will take years of patience, gentle care, and handling, I’m sure that when you reap the fruits of your labor, it will be sweet. 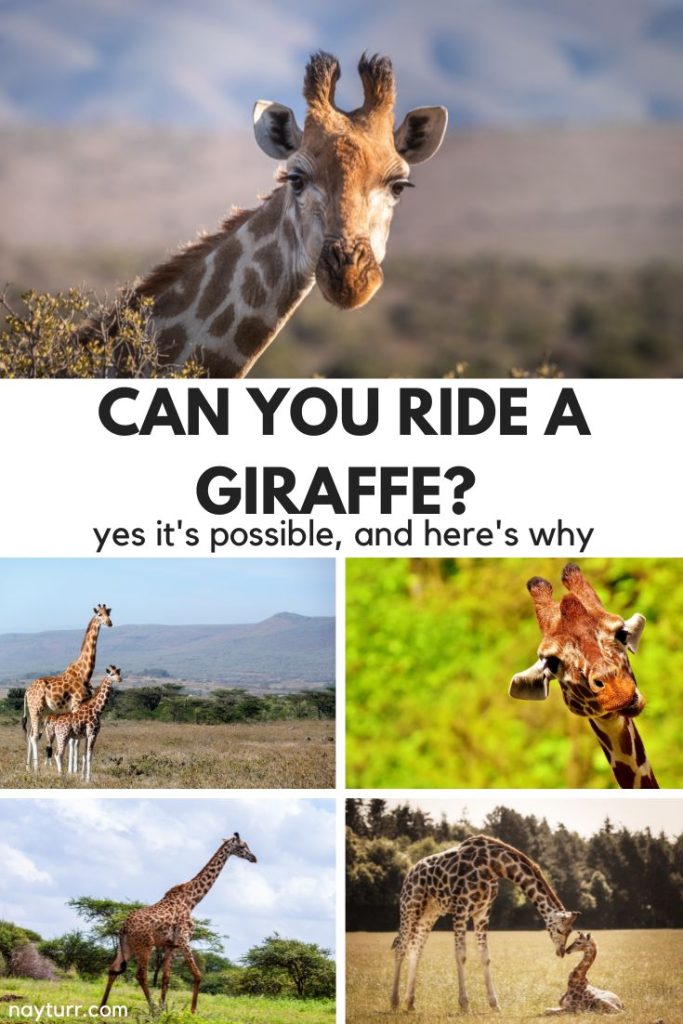