Did you know that the first ever documented parrot to have been kept as a pet was an African Gray back in 1504 during the British period? It belonged to none other than Prince Henry Tudor, or better known as Henry VIII.

After that, keeping pet parrots became a status symbol, so much so that parrots were often depicted in pieces of literature and art, and were even showcased in zoos later on.

Historians believe that parrots were also kept as companions by the upper classes and royalty in Africa and Asia as early as the first millennium B.C.

One of the major reasons why their popularity as companions has only increased through the centuries is their amazing ability to pick up human speech like words and phrases and repeat after them with perfection.

Although the African Grays were the most widely coveted pet parrots back in the days, several other varieties and types of parrots were later discovered by popular figures like Christopher Columbus, Alexander the Great, etc.

Here is a list of all the main types of parrots.

The African Grey Parrot has quite a reputation among bird lovers and bird enthusiasts and is often referred to as one of the most talented mimicking and talking birds in this world. It is one of the oldest psittacine species of parrots and records show that their existence goes back to the biblical times.

This parrot sports a stunning dusty-gray color and looks quite similar to a pigeon. A standout and striking feature of the bird, however, is bright red tail that sets it apart from other similar-looking gray birds. It further has intelligent looking orange-colored eyes and a beautiful scallop-like pattern on its feathers.

The African Grey Parrot is typically found in coastal mangroves, savannas, woodland, and forest clearings in the Central and West Africa range. When in the wild, their diet usually contains leafy matters, seeds, fruits, and palm nuts.

In terms of behavior and personality, they are commonly described by their owners as highly complex and are often very sensitive and a little demanding. African grays are super intelligent and charming though, and much of its appeal among bird lovers comes from its ability to talk.

Added to this, these birds have the aptitude to develop excellent vocabulary, given their ability to repeat phrases and words just after hearing them once or twice.

This bird can be quite talkative some times and is not a shy bird at all, making it one of those social birds that become excellent companions for everyone in a very short amount of time.

Ring-necked parakeets are found in various different beautiful colors that range from shades of greens, blues and yellows. However, the most commonly found species of this bird have a bright lime-green color with a touch of yellow under the wings and gorgeous blue tail feathers.

These birds have quite a reputation for being hard to train and nippy but even so, they have super charming and sweet personalities, making them a much favorite and loved among bird enthusiasts. They are also big on good, filling appetites that include pellets, vegetables, fruits and other healthy foods.

The Rosella species of parrots is also commonly known as Eastern Rosella or golden-Mantled Rosella and is native to Tasmania and Southeast Australia. It typically lives in woodlands, open forests, parks and gardens.

This particular kind is the most popular parrot in the Rosella family and also among bird pet owners due to its stunning appearance. It consists of a palate of striking bright colors all over its body.

With a darker green back, crimson head and chest, cobalt shoulders, a pale green underbelly and white cheeks, the Eastern Rosella makes one of the most beautiful birds found on planet Earth. It is almost as if this bird is a work or art, furthered by its white beak and tiny gray feet.

One key quality of this bird is that it needs a really good diet to thrive which usually consists of herbs, native grass seeds, fruits, and flowering buds.

Although a Rosella is not much of a cuddler, It is still an easy going bird and can easily turn into an ideal family pet.

The New Zealand Parakeet, as the name suggests, originates from New Zealand. It sports a bright green color but the different sub-species of this bird can be identified and distinguished by the varying colors on their heads.

The ones native to New Zealand are also called “Yellow-Crowned Parakeet” with a yellow patch on the top of their head and a bright red band above their beak. Some of their species are particularly found in forested areas of South and North Stewart Islands and also the Auckland Islands.

Amazon parrots are best known for their gregarious personalities, characterized by playfulness and boisterousness. This outgoing personality is also what makes them more popular among medium-sized parrot species, where some of them even love to sing.

Since the dawn of time, the Amazon parrots have earned quite a well-deserved reputation as the “life of the party” primarily due to the fact that they are super comical, bold and love to be in the limelight. They originate mainly from South America and Mexico, also different parts of the Caribbean.

The Amazon parrot tends to have a hearty appetite which should consist of a well-balanced and nutritional assortment of fruits, vegetable and other healthy treats.

It is quite a favorite among pet lovers due to its easy-to-read mood and the amazing ability to express itself through varying body language like raised head, pinning eyes, broad stance, etc.

A Cockatiel makes for an excellent choice of pet for all those who prefer a smaller pet bird that requires less space and is super affectionate and loveable. It is a slender Australian parrot that is one of the most popular companion birds.

Cockatiels originate from the semi-arid regions of Australia and are the number one pet birds in America, mainly due to their super outgoing, cuddly and comical personalities.

They are more towards the quiet side and are more commonly known for their whistling abilities than talking tendencies which is primarily because of their habitat being in open environments.

Cockatiels need enclosures that are as large as possible and spacious enough for them to be able to easily flap their wings and play with toys and multiple perches.

Also called Blue-and-Gold Macaw, this type of parrot is simply the most gorgeous bird species with its dark lemon-yellow chest and a stunning blue body. It has a strip of green feathers above its cute black beak and a slightly naked face that turns into a pretty hue of pink which shows that it is very excited.

The Macaw is native to Central and South America with their habitats commonly found in woodlands and forests. A typical Macaw’s diet includes fruits, nuts, variety of seeds and varying plant material.

A defining feature of Blue-Throated Macaws is that everything is just big about them. From their attitude to their voices, they are like a force to be reckoned with! However, despite of them often coming across as raucous, they have soft and beautifully loving hearts with extremely sensitive natures. All it takes is a single gentle kiss for them to cuddle with you.

Also called “budgie”, the Budgerigar is more of a ‘beginner bird’ and has a very outgoing, social and playful personality. It is native to Australia where its habitats dominate over the grasslands.

According to historic reports, the naturalist John Gould brought budgies to Europe somewhere in 1838. Since then, they were readily bred and became popular pet birds in wealthy homes. They were also once displayed at the Antwerp Zoo, Belgium in the 1850s after which they gained quite popularity among people and not just with the wealthy.

Most of these birds are ground-feeders who love eating plant materials and a variety of seeds. Many also often love their seeds with vegetables, fruits and healthy pellets.

An interesting fact about the budgies is that they are the best talking birds among parrots with an ability to learn a large number of phrases and words in a short amount of time. One budgerigar was once recorded to have repeated more than 1700 words!

White Cockatoo, or Umbrella Cockatoo, belongs to the group of most loving and friendly social companion birds and are native to the islands of Indonesia, mostly dominating the tropical rainforests. One of its most distinguishable features is its stark white crest that stands up like an umbrella every time the bird is agitated, excited or angry.

An interesting fact about cockatoos is that their choice of food reflects their traits of being intelligent, energetic and fun-loving. Most of them eat grain crops, nuts, seeds and coconuts.

While they are super charming and genial, they aren’t for everyone because you are likely to find them being all playful one minute, and the next minute they’ll be screaming and nipping.

Now that you are familiar with the common and main types of parrots, which one are you going to get for a pet? 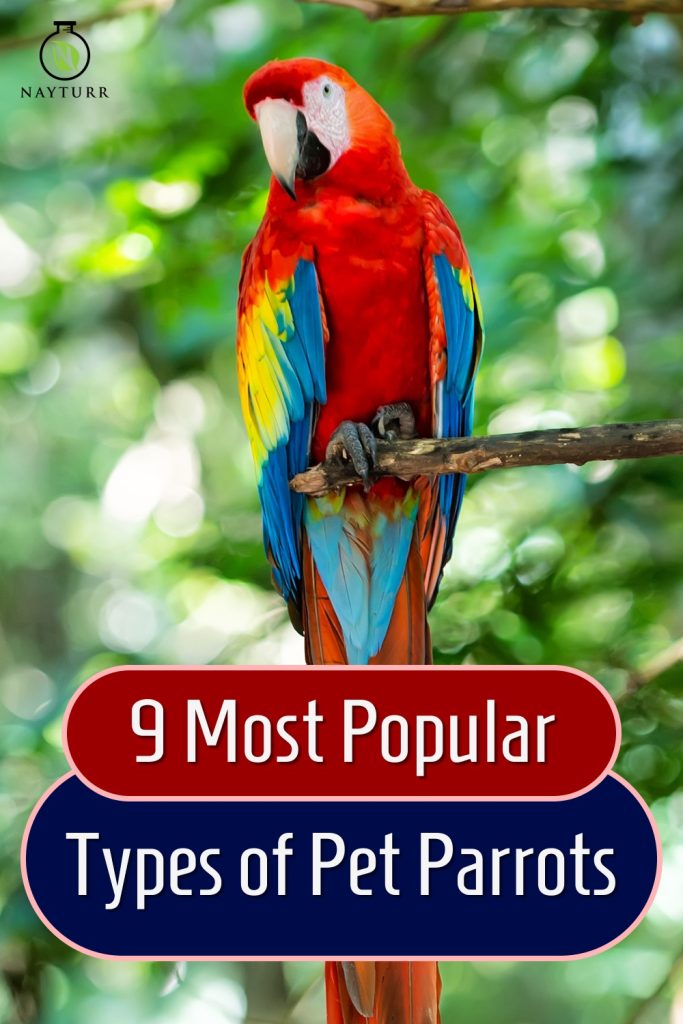