There are a total of 117 million lakes on the planet with about 90 million of them spanning 0.5 to 2.5 acres (0.2 to 1 hectare) or just less than two football fields in size. The shoreline of all these lakes combined makes up about 250 times the length of the equator which is 12,756 kilometers in length.

Finland earned the nickname The Land of the Thousand Lakes because it is home to over 187,000 lakes. The world’s highest lake, Ojos del Salado, can be found at an altitude of 20,965 feet and located in a crater in the Andes Mountains on the border between Chile and Argentina. On the other hand, the world’s lowest lake is the Dead Sea at 1,371 feet below sea level.

Check out our article about the Top 10 Deepest Lakes!

If a lake is formed due to the result of wind activity, they can be called aeolian lakes. Usually found in very dry environments, they are also called interdunal lakes, and they can also be formed when water from precipitation accumulates in a cavity between two sand dunes. Moses Lake in the State of Washington is an example of an aeolian lake.

A reservoir is the most common type of artificial lake, and they generate hydroelectric power, supply water for home usage and industries, and are usually formed through the interception of two different bodies of water.

Examples include Lake Mead, which was formed by the Colorado River; and Lake Nasser, which was formed through the interception of the Nile. Essentially, an artificial lake is one where the water is used for public use, so it is always a body of water surrounded by land.

When the flow of a river is not straight but bends throughout the course of the river because of nonuniform land topography, several lakes can be formed by the running water along the way, and these lakes are called fluvial lakes. In Iowa in the United States, there is a fluvial lake called Carter Lake.

Lakes with freshwater are the most common types of lakes in the United States. They are fed by rivers and have no out-flowing streams. Some of the most well-known types of lakes include the five Great Lakes – Huron, Ontario, Michigan, Erie, and Superior.

These lakes occur when a meteor or asteroid crashes into the surface of the earth and forms a depression. Years later, precipitation can accumulate in the depression, which creates this type of lake. When scientists study these types of lakes, they can gain a lot of valuable information about various types of extraterrestrial objects.

These are very small and extremely rare types of lakes, and they are formed by the action of either flora or fauna. If beavers dam up a river and a reservoir occur, this is a perfect example of an organic lake. They can also be formed when vegetative growth creates dams or coral lakes.

In a permanent lake, the amount of evaporation is lower than the amount of precipitation, and because they are extra deep, they tend to carry more water than it is possible to have evaporated. The Great Lakes of North America and the Rift Lakes in East Africa are perfect examples of permanent lakes, but there are thousands of other permanent lakes across the globe.

Also called saline lakes or salt lakes, these types of lakes form when no natural outlet occurs or where water evaporates quickly and there is a higher-than-usual salt content on the drainage surface of the water table.

The lakes are filled with saline because there is intense evaporation involved which produces a negative freshwater balance. Examples of salt lakes include the Aral Sea, the Great Salt Lake, and the Dead Sea, the latter of which has a salt content of 250 parts per thousand.

When bedrock is soluble and it dissolves due to percolating water and precipitation, hollows or cavities can form, and if the precipitation fills up that cavity, it can create a lake, called a solution lake.

Sometimes, this bedrock collapses and forms a sinkhole, and if nearby groundwater gets into the hole, this is another type of solution lake. Solution lakes are fairly common in the Dalmatian coast of Croatia and even in Florida.

Types of Lakes Formed by Deposition

Also called barrier lakes, they result when things, such as avalanches and landslides, block valleys and cause rivers to be dammed up. These types of lakes are short-lived, and examples include those formed several centuries ago in the Outer Himalayas and other areas.

Lake Mead is one of the most well known man-made lakes, which are formed when a concrete dam is placed across a river valley, which allows the river water to be kept back to form reservoirs.

In addition, in areas such as West Malaysia, where man’s mining activities have taken place, these lakes have been formed. Even the inland fishing culture has made the creation of many fishing lakes necessary, so man-made lakes are more common than many people realize.

Lakes formed by marine deposits are also called lagoons, and an example is Chilika Lake, which is found on the eastern coast of India and spreads across an area of approximately 700 square miles. Lagoons are stretches of saltwater that are separated from the sea by either a coral reef or a low sandbank.

An oxbow lake is an example of a lake made by a river deposit, and these are lakes that are found on the floodplains of the lower Ganges, the Lower Mississippi, and many more.

For a more detailed guide about the different types of rivers around the world, read our article “9 Different Types of River”

Types of Lakes Formed by Movement of the Earth

These types of bodies of water are formed when two blocks of the earth come apart and cause the “in between” block to slide in a downward motion. They can also be formed when two parallel faults result in the land between them sinking in, and they are very narrow, deep, and elongated.

Often, rift valley lakes have floors that are below sea level, and water often collects in the rift’s valley, which is called the trough. Some examples include Lakes Rudolf, Edward, Albert, and the Dead Sea, which is the world’s lowest lake at 1,286 feet below mean sea level.

Tectonic lakes result from several occurrences in the earth’s crust, including fracturing and bending, warping, and subsidence, which means it slides downwards. Because of these things, tectonic depressions occur and cause the lakes to have extra-large depths and sizes. The Caspian Sea is the perfect example of a tectonic lake.

Types of Lakes Formed by Erosion

Rainwater is solvent when it’s splashed on limestone, which often causes hollows to be carved out in the stone. Karst lakes are formed when these hollows become clogged with debris, and when underground caverns have limestone roofs that collapse, there are often long and narrow lakes found underground that are then exposed for the world to see.

These lakes essentially form when soluble rocks such as limestone and dolomite dissolve, and they can result in the creation of underground drainage systems with caves and sinkholes.

Some karst lakes, in fact, have features that are only noticeable under the ground. The study of these types of lakes is especially important to petroleum engineers and other scientists.

When desert winds create hollows, they often reach groundwater that results in shallow, small lakes. If an excessive amount of evaporation occurs, these can become salt lakes and playas, and the perfect example of a wind-deflated lake in the United States is the Great Basin, which is located in Utah.

Types of Lakes Formed by Glaciation

Cirques are hollow basins that are cut into the ridge of a mountain, and they have steep slopes on three sides and an open end on the fourth side, as well as a flat bottom. When ice melts, cirque lakes can develop into tarn lakes, which are essentially formed when a cirque lake is excavated by a glacier. When river water or rainwater fills the cirque, it can be called a tarn.

Lakes That Are the Result of the Morainic Damming of Valleys

The morainic activity consists of massive amounts of rocks and sediment that are carried down and deposited by a glacier, most often as ridges at its extremity or its edges. When this type of debris is deposited across a valley and results in the water accumulating behind the barrier, lakes are formed, and this is a prime example of morainic damming activities that form these types of lakes.

Types of Lakes That Are Formed by Volcanic Activity

When a volcano explodes, the top of the cone can blow off, which leaves a natural hollow that is called a crater. Through subsidence, the hollow can be enlarged, in which case it is called a caldera.

When volcanoes become dormant or extinct, the rain falls right into the caldera or crater, which is how these types of lakes are formed. There are also lava-blocked lakes, and examples include the Krakatoa in Indonesia and the Lonar in Maharashtra.

Check out our article about the “7 Different Types of Magma”. 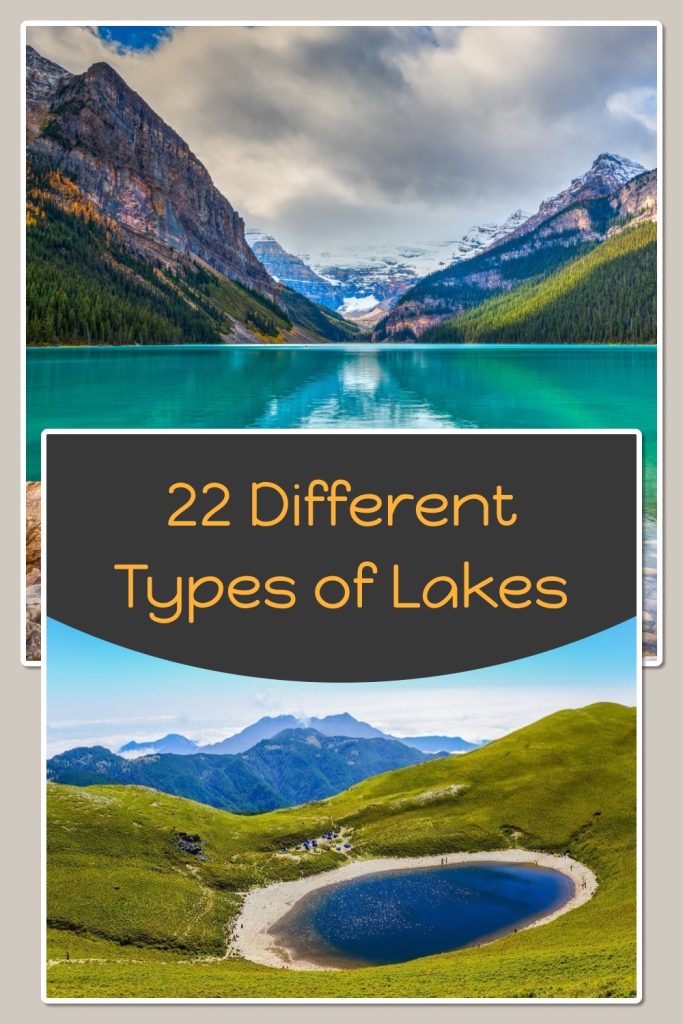