Bears are largely carnivorous mammals that are classified under the family of Ursidae. The word ‘bear’ is derived from an Old English word ‘bera’ which means brown. They are found all across the world, with large populations in North and South America, Asia, and Europe.

There are eight main species of bears that exist in many different habitats of the world. Around six species of the bear are endangered or vulnerable due to hunting, poaching, and illegal trade.

Most of them can be characterized by shaggy hair, paw with claws, short tails, large snouts, stocky legs, and small rounded ears. They have an excellent sense of smell and many of them are nocturnal.

As a species, they are really talented climbers, swimmers, and runners despite their heavy and awkward built. Bears live in shelters like dens and most species hibernate for 100 days during winters.

The Tibetan Blue Bear is a subspecies of the brown bear and is found in the Eastern Tibetan Plateau. They are one of the rarest subspecies in the world and are estimated to be extinct in the wild.

The bear was found in the West previously but now only fur and bone samples remain. It lives in high altitudes near tree lines in mountainous regions; however, not much is known about their natural habitats and

behavior due to their critically endangered status. It has a diet of small mammals like the Pika and may allegedly partake in pine nuts.

The American Black Bear is native to North America and is a medium-sized bear. They are widely distributed throughout the region and are omnivore creatures. Their diets can change according to their location and season. They live in forest areas but they may leave the shelter for food.

The American black bear is the most common among bear species and is listed as a least-concern species under IUCN. It is only one of the two species of the bear not threatened with global extinction. They communicate with other bears by marking trees with their claws and teeth.

The Asian black bear has a white chest and is commonly known as the moon bear due to this. They are medium-sized and are native to Asia. They reside in the Himalayas, Northeastern China, Korea, Northern Indian, islands of Japan, Taiwan, and Far East Russia.

They are classified as vulnerable due to hunting activities and deforestation. They are very similar to prehistoric bears and are the ancestor to a lot of species of bears. They are mainly herbivorous creatures but have learned to be very aggressive to humans who try to kill or trap them.

Polar bears are hyper-carnivorous bears that live in the Arctic Circle and are large-sized bears. The males weigh about 350–700 kg while the female polar bears are half of that size. They are sisters to the brown bear but their body has adapted for the cold temperatures of the region they reside in.

They can move across ice and snow easily and are excellent swimmers in the open waters of the Arctic Ocean. They hunt seals which make up the main portion of their diet. They spend most of their lives on sea ice and are born on land.

They are vulnerable species due to loss of habitat from climate change. There are an estimated 22–31,000 polar bears still in existence.

The Malayan Sun bear lives in the tropical forests of Southeast Asia. They are marked as vulnerable since their global population has declined 30% in just three bear generations. This is due to hunting and large amounts of deforestation with subsequent loss of habitat and food.

The Sun bear is also commonly known as the Honey bear due to their love of honey, bees, and honeycomb as food. They also eat insects and fruits, which they find easily with their sharp sense of smell.

They do not hibernate and are diurnal creatures that sleep most of the day. They are social animals under captivity but can be quite aggressive if they are surprised in the wild.

The Giant Panda is native to South Central China. It is a large bear species with black patches around the ear, eyes, and across the body. Estimates show that there are 2000-3000 individual pandas around the world.

Its diet consists 99% of bamboo, which is one of the main factors that contribute to their endangered status (it has been changed to vulnerable due to global conservation efforts).

Deforestation of bamboo trees led to the loss of food, which impacted the population of the Giant Panda significantly. It can also eat grass and even meat on occasion. Under captivity, they may ear fish, eggs, leaves, oranges, bananas, honey, and other specially prepared foods. They mostly live in mountain ranges of central China or in captivity across the world.

The North American Brown Bear is commonly known as grizzly bears and live all over North America.  They are mainly omnivores and eat seeds, roots, grasses, berries, elk, fish, deer, fungi, and insects.

They increase their calorie intake during fall in preparation for winters. They are commonly found in British Columbia, Alaska, and Alberta. In North America, they existed in a population of 50,000 but now only 1,800 remain.

They thrive in dense forests, open plains, arctic tundra, and subalpine meadows. They scratch their backs by rubbing on trees, which also help them communicate with other bears. They aren’t social animals but can co-exist and feed together where food is aplenty.

The Kodiak brown bear is also known as the Alaskan brown bear. They are mainly found in the southwest region of Alaska in islands of Kodiak Archipelago. They are similar to American brown bears in diet and general features but vary in size.

They mostly weigh up to 300 to 600 kg which is twice the size of American brown bears. Hunting them for their meat and fur is common, which has led to conservation efforts. They are classified as least concern species due to these efforts. Their progress is carefully monitored by the Alaska Department of Fish and Game.

The Marsican brown bear is critically endangered restricted to the small region of the Abruzzo National Park and surrounded areas in Italy. They live in isolation and only around 50 bears remain on the planet. They have a relatively calm temperament and show no signs of aggression towards humans.

They are larger than most subspecies of bears; males weigh up to 217 kg and females weigh on average 140 kg. They mainly eat berries but occasionally have small animals like chickens.

They can sometimes be seen rolling over rocks to eat insects and their high sense of smell helps them while searching for food. They wake up several times during their hibernation slumber.

The Sloth bear is mainly dependent on insects for their diet and is native to the Indian subcontinent. They are marked as vulnerable due to degradation and loss of habitat. They use their palate and lower lip to catch insects such as termites and honeybees.

They have long, shaggy fur, manes, sickle-shaped claws, and lanky bodies. Sloth bears are territorial and may attack humans if they are encroach on their habitat since humans are the main reason for their decreased population. In many cases, they have been tamed to perform.

The Spectacled bear is the last remaining species of the short-faced bear. They are native to South America and are classified as vulnerable. 5% of their diet is composed of meat, making them the largest carnivore of the region.

They are a medium-sized bear and have blackish colored fur with ginger or beige colored marking on the upper chest and face. Females are a third in size of males and all Spectacled bears have short, broad snouts.

They tend to isolate themselves due to the high competition of food but may eat in small groups if food is in abundance. They are relatively docile but cautious of humans; they may show aggression if they are cornered or are protecting their cubs.

Bears are beautiful creatures that have been significantly harmed from human activities around the world. Their habitats are in danger due to deforestation, climate change, and hunting.

Humans around the world need to come together to make a better effort to save these creatures from extinction. Conversation efforts are headed in the right direction and need to continue further to protect bears.

Check out our article “4 Types of Kangaroo” 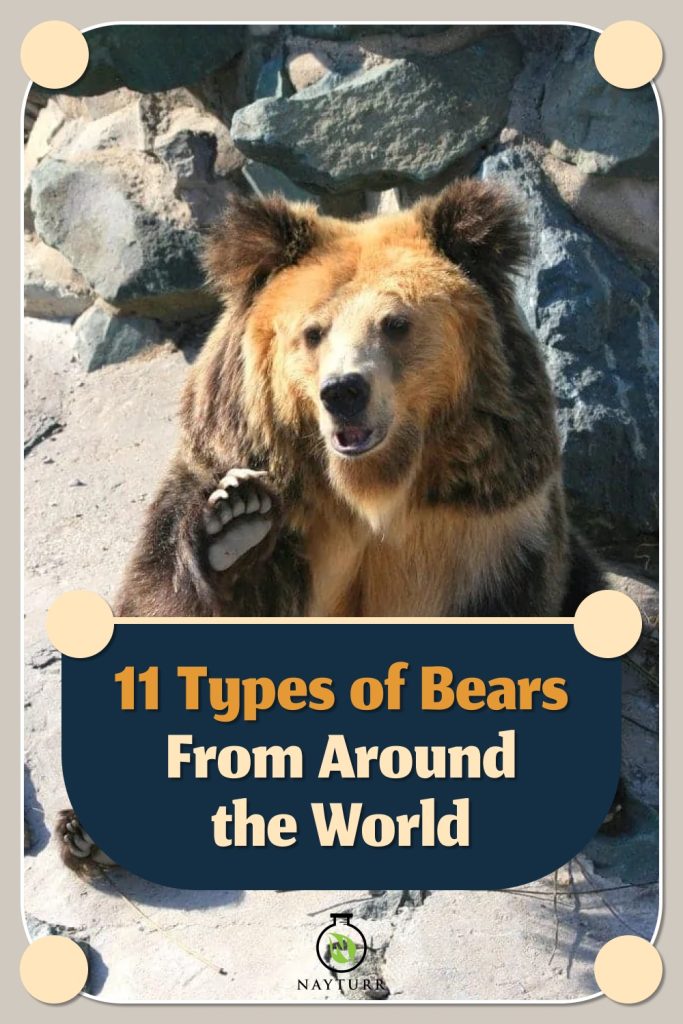