Kangaroos are prominent animals that almost everyone can recognize on first sight and instantly associate with Australia since they are, after all, its national animal. Although, the first thing that comes to mind when you think kangaroos is kickboxing, there is much more to the mammal than meets the eyes.

They are mammals of the Macropodidae family, which makes them macropods. Macropods are the Greek word for “large feet”, which is a fitting name for these animals since they are known for their distinctively large feet.

They also have marsupials (pouch), which lends them their classification in the infraclass (subclass) of Marsupialia. Kangaroos are an aboriginal species of Australia and are indigenous to the region.

Kangaroos have been deemed as strange animals, almost unique, for quite some time now. Early discoverers described them as creatures with deer-like heads but without antlers, that stood upright on their two hind legs like human beings and bounced like frogs.

Early explorers also reported that this animal appeared to have a combined body that presented the two-headed appearance of a mother kangaroo with another head, of what appeared to be a baby peeking out of the mother’s pouch.

Most of the people who heard of these tales and detailed descriptions dismissed them as mere travelers’ tales for a while. As the population of these animals started increasing gradually, and Australia began being inhabited by more people, the myth soon became a well-known fact.

According to experts, kangaroos have been around for about four million years. With many of its sub-species extinct, there are now only a few species of kangaroos left that still roam their native land. In fact, kangaroos have the most living and extinct species among all other species in the genus Macropus.

Some of the primitive kangaroo genera are:

Kangaroos live in Eastern Australian deserts, dry forests and open grasslands. They graze in these locations in small groups called troops or herds, or in mobs as referred to by Australians. These mobs normally consist of around 50 or more animals.

Indigenous and European Australians have been clearing open territories of land and setting up water sources, both of which are necessities for kangaroos, in different places for centuries now.

There are over 24 million kangaroos grazing the Australian pastures, even though a significant number of them are killed each year for their meat  More and more of the meat is slowing finding its way into further grocery stores and luxurious restaurants with each passing day. Kangaroos are also hunted for their highly sought-after skins.

Like cows, kangaroos to have single-chambered stomachs and therefore they sometimes regurgitate the vegetation they have eaten, re-chew it as cud, and then swallow it again for complete digestion.

Some of the distinctive features of this animal are its powerful and muscular hind legs which help jump higher, the relatively smaller front legs, its big feet, a sturdy tail that helps it in balancing, as well as long, pointy ears.

Because of their large feet and powerful hind legs, kangaroos can leap up to 30 feet in one single spring, and travel 48 kilometers, and at times more, per hour.

Kangaroos are the tallest among all marsupials, hovering over at about an astounding 6 feet. It is also worth noting that the average life span of a kangaroo is of 23 years, while its weight is generally 90 kilograms and more.

Female kangaroos also have a marsupial, better known as pouches, for nurturing the young till they are developed enough to come out.

They populate the plains and paddocks of the tropical north, all the way from the Cape York Peninsula in the east, extending to the Kimberley in the west.

Adult Antilopine males can grow up to 1.8 meters (5.9 feet) in length and can weigh as much as 70 kg (154 pounds), whereas female Antilopine are smaller, mostly weighing less than 30 kg (66 pounds).

The noses of male Antilopine kangaroos swell up behind their nostrils, helping them discharge more heat in hot and humid climates, allowing them to cool off.

The male Antilopine are covered with a thick, reddish-tan coat with pale chest fronts. On the other hand, the females’ coats range from gray to a light tan in color tones.

The Antilopine have slender faces and doe-like eyes and have an average lifespan of 16 years.  These kangaroos are exceptionally quick hoppers.

These Antilopine kangaroos mainly feed on grass and always search for short grass areas and grass patches. Native Australians like to refer to these kangaroos as gregarious grazers due to their habit of excessively grazing as a mob.

The western gray kangaroos (M. fuliginosus) are large and very common along the southern coast of the southwestern and Western Australia as well as in parts of southern Australia. The western grays are usually found in large mobs and can be anywhere in color from gray to brown.

Western grays are shorter than eastern grays, with an average length of 1.6 meters (5.25 feet). The adult western gray males can weigh up to 54 kg (about 120 pounds). These kangaroos are also called black-faced kangaroos, malle kangaroos and sooty kangaroos.

This species of kangaroo displays sexual dimorphism, with the male kangaroos being twice the size of a female. The western grays have a thick, coarse coat ranging in color from gray to brown. The chest, throat, and belly have a paler color shade compared to the color of rest of the body.

The eastern gray kangaroos (Macropus giganteus) are also referred to as the great gray kangaroos or the Forester kangaroos. These kangaroos are mostly spotted in the open forests and grasslands of eastern Australia and Tasmania.

They prefer lightly forested territories for refuge and the open plains and pastures for grazing. The eastern grays inhabit the wetter parts of Australia and prefer open busy grasslands for shade during the day.

Eastern grays grow up to the height of 2.1 meters (6.9 feet) all the way from the head to the tail. The adult males weigh as much as 90 kg (about 200 pounds). In contrast, the females weigh about 37-88 pounds with an average total length of 6 feet.

These kangaroos are known for jumping up to 30 feet at a time. Large males of the species are more muscular and heavily built than the red kangaroo. The eastern gray kangaroos can travel at speeds of around 30 miles and upwards in an hour.

The maximum recorded speed of any kangaroo is approximately 40 miles per hour and this record was set by a large female eastern gray kangaroo. The kangaroos of this species have soft gray coats that are easily identifiable and their eyes appear to be large and wide.

The eastern gray kangaroos are known to have small heads and large upright ears. Both the western and eastern grays are uniformly colored, and their noses are hairy.

The eastern grays carry a genetic marker for blindness in one or, at times, both eyes, making them weak-sighted. They inhabit the wetter parts of Australia and prefer open busy grassland for shade during the day.

The red kangaroos (Macropus rufus) are regarded as the largest existing marsupial in the world. They also top the list of the largest and most powerful macropods. They are the most easily identifiable type among all the kangaroos’ species.

Red kangaroos are found throughout mainland Australia’s interior grasslands and mostly inhabit the arid and semi-arid center of the country. These kangaroos demonstrate sexual dimorphic. The adult male kangaroos are covered with a thick coat of fur, usually of reddish-brown or at times of pale yellowish brown color.

The females, on the other hand, have a bluish-gray fur coat that turns to a pale gray on the lower body. Female red kangaroos are relatively much smaller than the male kangaroos and weigh between 40-88 pounds.

The red kangaroos are easily identified because of their long arms, distinctive convex face, whitish underparts, prominent black and white whisker marks on the muzzle, and bald patches on the nose (rhinarium).

Red kangaroos are highly evolved species. The position of their eyes enables these animals to have a complete 300-degree vision. These kangaroos populate grasslands, scrublands, and deserted territories of western and central Australia because of their diet.

Studies suggest that 75-95% of the red kangaroos consume a diet that consists of shrubs and green grasses. These animals are also capable of going without water for long periods of time because they can conserve enough water to survive arid and parched environments, as long as they have access to green shrubs and plants since they can extract moisture out of plants.

Red kangaroos are nocturnal and crepuscular creatures and emerge only at night, the crack of dawn and fall of dusk. They prefer to rest during the daytime under shades and hardly move around in daylight.

Red Kangaroos are known to trek for 16-19 miles in search of good feeding grounds in case forage in their area is poor. Grazing takes up most of these kangaroos’ daily activities.

Fun Fact: The red kangaroo is also the national animal and emblem of Australia!

There are a number of subspecies of these 4 main types of kangaroos that roam the pastures of Australia.

However, the 4 species discussed above make up for the main population. So the next time you find yourself on a safari in Australia or in the presence of kangaroos in a zoo somewhere, we expect you to be able to easily point out which one it is exactly. Happy kangaroo watching! 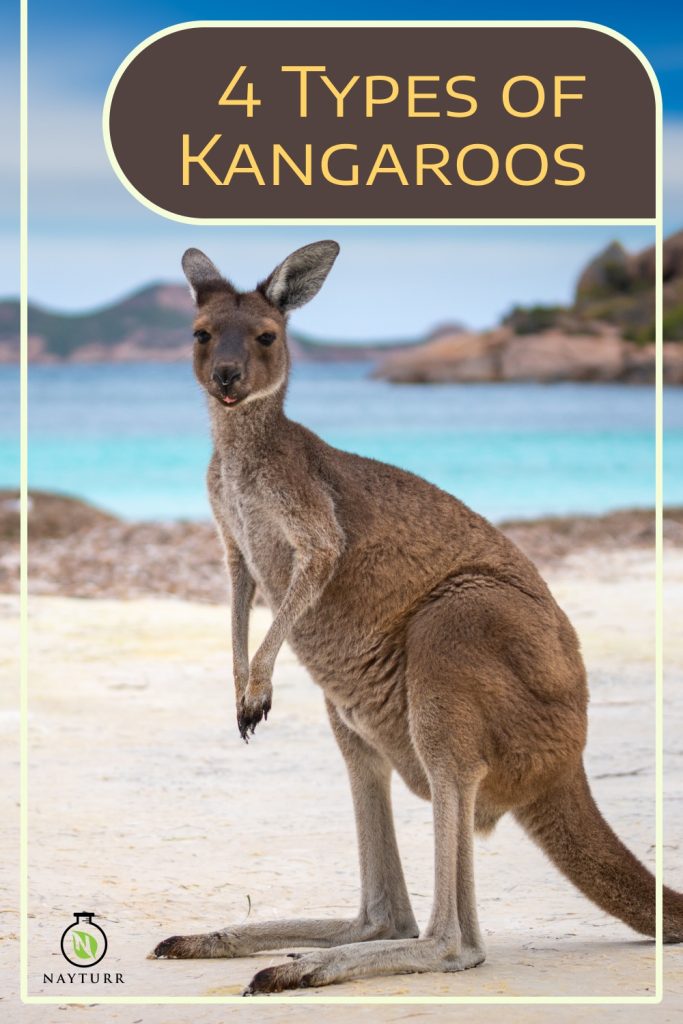