We’re all too familiar with the concept of loud sound potentially damaging your hearing. But is there a sound loud enough to kill you?

Shock waves are a sound loud enough to kill you. Shock waves, however, are not the same as sound waves, and not all shock waves are lethal. There are also alpha-rhythm frequencies that are only 7hz, so humans can’t hear them, but if played “loudly” and long enough can kill a person.

People associate sound with hearing because that’s how we interact with it. But sound is a force that travels through the air. It is this force that has the potential to kill.

Force should not be confused with speed, however. After all, light travels faster than sound. But the way sound travels is very different from light, which is why there no sound in space, but there is light.

So what type of sounds can actually kill you? Let’s find out…

Can Sound Kill You?

Yes, as discussed above, sound can kill you. The European Space Agency even has a “horn” that isn’t used as a weapon but potentially could be used as one. This is because anything higher than 135 decibels might be deadly. The “horn” reaches 154 decibels, which is enough to burst your eardrums (150 dB). However, some argue that you need 185-200 decibels to be lethal.

How Does Sound Kill As a Pressure Wave?

Sound is a mechanical force. Usually, humans don’t notice the force of sound other than something they hear. But if the force is strong enough, it can slam harder than a car or cause your organs to vibrate until they explode.

Sound moves through the air like a motivated shopper on Black Friday, pushing and shoving others (molecules), causing them to vibrate. However, sound can’t travel on its own. Instead, sound requires a medium to move, such as air, water, or even steel.

Sound’s dependence on others for movement is why, generally speaking, there is no sound in space, but there is light. There is nothing to push and shove in a vacuum. Wheres light, on the other hand, is a particle, called a photon, and is an electromagnetic disturbance, not a pressure wave. Thus, light is not a mechanical force.

When an eardrum ruptures, it is due to excessive vibration. First, vibration pushes (high-pressure), and then behind each push is a low-pressure. A heavy swing between high and low, say in the 185-200 decibels range, can cause organs such as your lungs to expand and burst.

How Do Shock Waves Kill?

Shock waves are not the same as sound waves; in fact, shock waves travel faster than sound. A regular sound wave causes a disturbance (vibration) as it speeds along. However, shock waves displace, causing travel at supersonic speed.

Explosions cause most shock waves. Popping a child’s balloon, for example, creates a minor shock wave (and possibly a major tantrum). A stun grenade (flash-bang) is supposed to cause enough to disorientate but not kill, although it could damage the eardrums. But if the explosion is strong enough, it isn’t just flying shrapnel that can kill, but the blast (shock wave), creating fatal injuries such as “blast lung.”

Most people think of deadly sound as being loud. But if the sound were weaponized, it would probably be done with sounds humans could not hear. The most dangerous to humans would be an alpha-rhythm frequency of 7 Hz, the range of brain waves, (which is 5-8 Hz, depending on the brain’s current state, such as sleeping).

Infrasound is low frequencies below 20 Hz, the human’s lower threshold for sound. To help put that in perspective, the lowest note in a 5-string bass is 30.87, and the lowest note on a piano is 27.5 Hz. To get a musical instrument to drop below 20 Hz requires it to be electric, or a 64 pipe organ, which can hit 8 Hz from its 22 yards (20m) pipe.

Loud infrasound can negatively impact the human body. An Air Force experiment in 1965, for example, left people feeling their chests move involuntarily after 90 seconds of exposure to infrasound of 151-153 decibels.

Vladimir Gavreau, in the 1950s, was rumored to begin experimenting with sound after a bizarre event at his lab that was making people sick. His investigations into it led him to supposedly making an infrasonic whistle that turned a person’s organs “to jelly.”

While there is no official deadly infrasound weapon, the American Electronic Corporation did develop a sound cannon that can incapacitate a person for half an hour. The device’s ultrasonic beams supposedly solved the major drawback of sonic weapons: sound waves are difficult to contain or direct.

The Difference Between Hertz and Decibels

Some of the confusion as to the power of “silent” low hertz sounds is because decibel (dB) and hertz (Hz) are not the same thing.

Hertz is the frequency, which we generally think of high or low sounds. Humans hear between 20 Hz to 20,000 Hz. Where a dog whistle, for examples, is around 45,000 Hz. The sound is too “high pitched” for us to hear.

Blue whales, on the other hand, “sing” at around 10-39 Hz. Hence people’s fascinations with “the loneliest whale in the world,” whose song is “high” at 52 Hz.

So hertz measures the sound’s pitch, be it high or low. Thus, just because you can’t hear it doesn’t mean it isn’t there.

Decibels, however, are the “intensity,” the pressure level. This is the part of sound humans call volume, be it “soft” or “loud.” This is also why dog whistles have to be used with great care. The whistles can be incredibly loud (decibels), but we simply can’t hear it (hertz), and a loud dog whistle can hurt a dog’s ears.

The reason a dog whistle, even a loud one, doesn’t tend to hurt a human, however, is because high frequencies don’t move much. A low frequency is a different story, hence the fear surrounding infrasound weapons.

What Is the Loudest Sound a Human Can Make?

The loudest human-created sound was a bomb, but because of calculations, which one was loudest is debated. The atomic bombs dropped on Nagasaki and Hiroshima during World War II are calculated to be 170 to 250.

Nuclear testing sites recorded 210 decibels from 250 feet away, producing at site estimates from 240 – 280 decibels. Runners up are the Tsar Bomba at 224 decibels, which was a hydrogen bomb tested in 1961. There is also Saturn V Rocket at around 220 decibels.

What Is the Loudest Sound Ever?

The loudest sound ever on earth is thought to be the eruption of Krakatoa in 1883. It was recorded at 174 decibels at 100 miles away and is said to have been 235 to  310 decibels at the source.

But the loudest sound ever in the universe is probably a black hole. As we still have a lot of space to explore, nothing is for certain, but the current loudest of the loud is the Perseus Cluster, estimated at 520 decibels.

While, generally speaking, there is no sound in space, there are sounds found in black holes due to the gas surrounding them. The gas is the sound’s medium.

But even if we could get near the Perseus Cluster without dying, we couldn’t hear its loud sound because it is way out of our hearing range. NASA describes the sound as “the B-flat pitch of the sound wave, 57 octaves below middle-C.”

What Is the Loudest Animal?

The sperm whale is the loudest animal. Their clicks at around 10 KH and can reach as high as 230 decibels. This sound is not easy for freedivers that study sperm whales. The reason we don’t have a bunch of dead free divers, however, is that the clicks are only 100 microseconds. These clicks are short but are part of what is believed to be a very sophisticated language.

Check out the “10 Largest Whales in the World” along with some fun facts about them in my article here.

Right behind the sperm whale is two other loud sea animals:

What is the Loudest Land Animal?

The loudest animal is debated, but a good bet is the bulldog bat, whose ultrasonic 55kHz call is said to be able to reach 137-140 decibels. But by 1 meter, it has dropped to 120 decibels.

Want to know the real differences between bats and birds? Check out my article here.

The howler monkey can let out sounds between 88 decibels to possibly as high 140 decibels, and can still be heard from as far as three miles away. The deep call is attributed to an enlarged U-shaped hyoid bone that hangs in the throat unattached to other bones. The impressive sound appears to come at a price, however, resulting in smaller testes.

Check out other fun facts about monkeys in my article here.

What Are the Loudest Home Appliances?

Homes can be noisy places too, and we’re not just talking about families with small children. A consistent 40 decibels is considered the ideal “noise” for a home.

Both the type of appliance, make, and model can impact decibel ratings. It can also depend on how you use the appliance. A food processor is quieter making guacamole than rattling up almond butter.

Thankfully, none of your household appliances are loud enough to cause internal organ damage. Even that crying baby is probably only 110 dB. After that, the biggest culprit is probably your dog’s squeaky toy you just stepped on while trying to tiptoe through the house, sending out a piercing 135 dB. 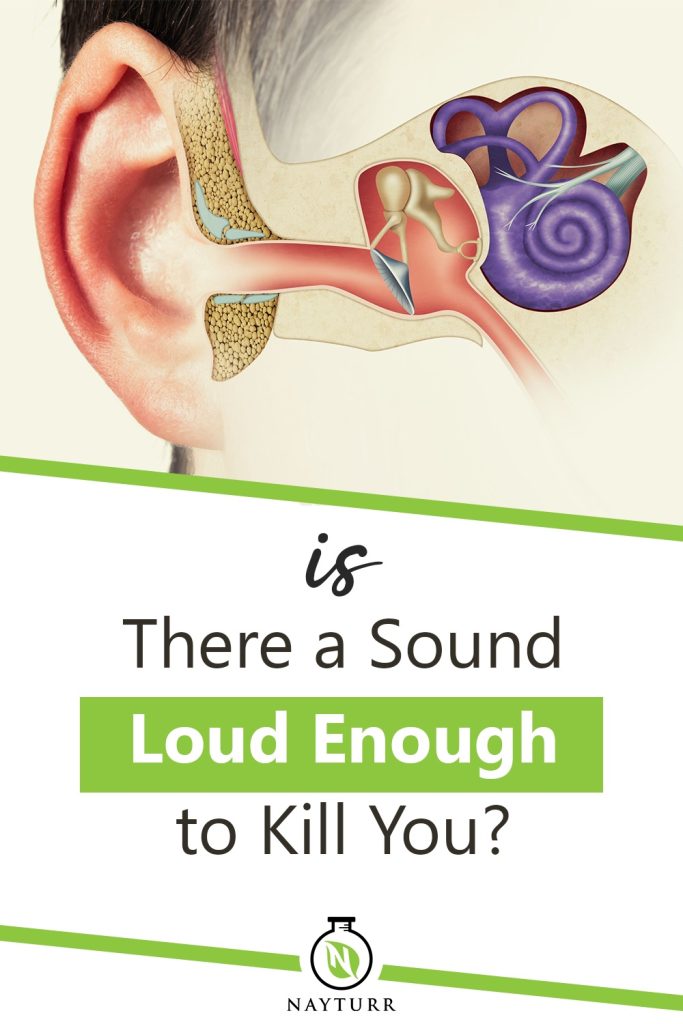