Looking up into the dark sky at night to see all the stars when camping or in the middle of nowhere is magnificent. Have you ever seen a star shining in the night sky of a different color besides white? So why do some stars have different colors?

The color of a star is largely affected by its temperature, although a few other factors also affect this, including its wavelength, atmospheric elements, distance from earth, and age. The color of stars is determined using a color index; this is done by looking at their brightness through filters.

Stars are very fascinating, they are billions of miles away, but we are still able to enjoy them twinkling in the sky. They come in diverse shapes, sizes, and even colors. The color of stars depends on many different factors, and its color can also tell us a lot about a star which we will look at in-depth.

Why Are Stars Different Colors?

For hundreds of years, many scientists have been fascinated by our galaxy. Many people believed that the stars we see in our sky are white because that is the color that appears to us.

Two hundred years ago, scientists learned something new and spectacular; they realized that stars come in many different colors.

Stars can come in various different colors of the rainbow, such as:

The main factor determining the color of a star is its temperature; other elements tie in with this but are also good to look at on their own.

Other factors that alter the color of a star are:

Temperature Of Stars & Their Effect on Color

All stars have different temperatures; the color of a star is determined by using Wien’s Law which looks at Black Body Radiation. This refers to the relationship between an object’s temperature and its ability to emit electromagnetic radiation. A black body can absorb radiation that it is in contact with rather than reflecting it.

We can determine how hot or cold stars are based on their colors. Cooler temperature stars radiate energy in the infrared giving off red tones in the electromagnetic spectrum.

At the same time, hotter temperature stars radiate energy in the ultraviolet giving off blue and white tones in the color spectrum.

From the coolest temperature to the hottest, the different colors of stars appear as red, orange, yellow, white, green, and blue. Check out the following graphic illustrating the temperatures of stars and how they relate to their color:

You can also understand the color spectrum and temperatures when looking at a fire, the hottest part is blue nearest the wood or coals, and the coolest will be further away, having more of a red color.

The Wavelengths Of Stars & Their Effect on Color

Scientists started learning more about light and its waves, and when looking at this, they realized that different kinds of light have different wavelengths. As stars and planets were being studied, scientists realized that light is seen in different shades of colors depending on its wavelength.

The wavelength of a star can change based on its temperature, and we know that the temperature of a star influences its color.

The hottest stars have a blue color and a short wavelength of light, while the coolest stars are red with a long wavelength.

It’s important to note that stars don’t only emit light of one wavelength but a range of light of different wavelengths. The wavelength that a star will transmit the most light will be its peak wavelength on the Planck curve, and this determines the star’s actual color.

The Elements In A Stars Atmosphere Can Affect its Color

Stars have different elements in their atmosphere, and this can alter the color of a star that we observe because when these elements are heated, they can change the wavelength of light. This may explain why stars have different colors coming from them.

These elements include the main ones making up the star, such as hydrogen and helium, but it also includes the trace elements forming part of the star. It is not only the fact that the elements are burnt but also how fast they are burnt, which will be spoken about more in the next section.

How the Age Of A Star Affects its Color

The color of a star can determine its age and lifespan, and younger stars will emit different colors compared to older stars.

Stellar classification can help tell how old a star is, whether young, middle-aged, or near death as well as how long their lifespan will be. There are many types of stellar classifications that can be used to determine this, such as the Hertzsprung-Russel Diagram.

As stars get older, they produce different elements that burn at different temperatures affecting their color. Stars are made in gas and nebulae when they are born, which are made of hydrogen and other chemicals.

The red stars are much older than the blue stars; since they are red, they are much cooler and burn their hydrogen at a much slower rate and so will exist much longer compared to blue stars.

Blue stars have an expected lifespan of 10 million years, whereas red stars are expected to live up to 100 billion years.

Our sun, which is pale yellow, is an average star, it sits between these two spectrums, and it is currently halfway through its 10 billion year life span.

The Distance Stars Are From Earth Affect Their Color

Another factor that can affect the color of a star is based on the movement of a star relative to earth. So this affects the light a star is reflecting to earth, known as the Doppler Effect. A star’s sound, waves, and light frequency alter due to its distance from where it is being observed.

Let us look at an example when a star moves further away from the earth, its wavelength will increase, and it will reflect a red tone on the color spectrum; this is known as ‘redshift’. ‘Blueshift’ is the opposite; as the star moves closer, it will fall on the blue side of the spectrum, and its wavelength becomes shorter.

The Human Eye Can Only See Certain Colors!

As mentioned above, a star’s peak wavelength will determine its color, although this is not the color the human eye will see. There are other contributions to this curve that affect how the light is seen through the human eye. So when the colors on the Planck curve are combined, they will be seen as white by the naked eye.

Due to this, the color of a star will be seen as lighter than it actually is, based on where it sits on the curve.

If we look at our planet’s sun, which is a star, its peak wavelength emits a green color on the color spectrum, although our eyes see a pale yellow to white color. This is because it is radiating light in the middle of the visible light spectrum, meaning it’s emitting light in many different colors, which we see as white.

Another example includes purple stars, and we have trouble seeing these color stars as our eyes are very sensitive to blue light. A purple star also emits blue light due to these colors being next to each other on the color spectrum, and the human eye will see these stars as blue as we can’t see the purple.

How Do Astronomers Determine The Color Of A Star?

The magnitude of a star is measured in wavelengths or colors, and colors are determined using filters. The color of a star is important to astronomers as they can determine its temperature based on its color. As we know from above, a hotter star emits more blue light compared to red, whereas a cooler star will emit more red light and less blue.

There is an array of filters that can be used for color indices; the common ones used by astronomers are B – V and V – R. the B is for blue wavelengths, V for green, and R for red wavelengths.

So let us look at how this really works; the magnitude will decrease when the star is brighter through that filter and increase when it is duller. So if B – V for a star is small, then it is bluer, but if it is large, then the star will be greener.

The color indexes of stars range from -0.4 and +0.2, which are the bluest stars, to the reddest colored stars. Always remember that the B – V is the blue minus the green, and the V – R is green minus red to get the correct color index.

It is very interesting learning about the colors of stars. They tell us about the star and why each star has a different color.

We are unable to see certain stars with the naked eye due to our eyes being sensitive to a certain light, which is why astronomers have specialized equipment to determine the true colors of the stars instead of going off what our eyes see.

A star’s color is mostly looked at to determine its temperature, and these two things are linked to its wavelength and age. It is so fascinating that we can tell so much about a star that is billions of miles away. Obviously, we don’t have every exact detail about it, but we can still gather interesting information about each star.

Check out our other articles about stars: 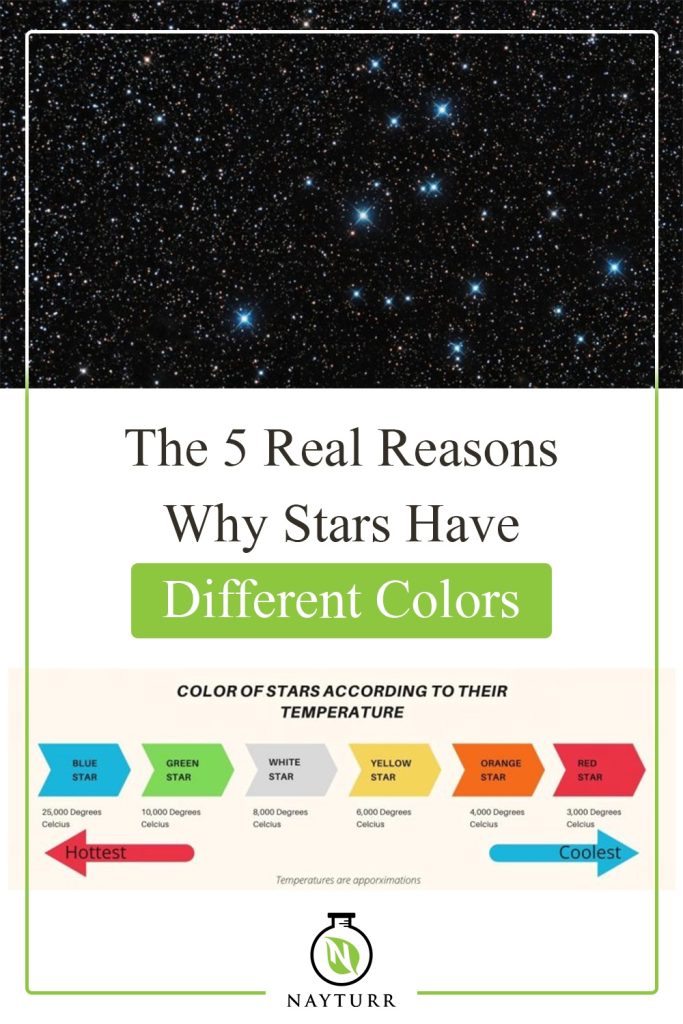