You may have heard that orcas or killer whales have big brains so you may ask, “Are orcas smarter than humans?” That’s an intelligent question to ask.

Orcas have the second-largest brain of all oceanic mammals, and their communication manners are outstanding. However, this does not mean that they are more intelligent than humans. Nevertheless, it’s worth knowing some amazing orca intelligence facts presented in this article.

Are Orca Whales Smarter Than Humans?

Humans are still smarter than orcas or killer whales. After humans, orcas are the most widely distributed marine mammals on earth. They are known for their ability to be incredibly effective predators. They are also known to be well-adapted to various climates.

According to studies, the brain-body ratio of marine creatures does not account for their cognitive ability. Orcas, for example, might be more intelligent than their large brains imply.

Larger animals have more brain cells. Scientists assess intelligence by comparing the brain’s weight to the body’s. Human brains are around seven times larger than average. On the other hand, orcas have two and a half times the average brain size, making them comparable to chimps.

However, these animals have a variety of characteristics that suggest they have exceptional intelligence. They have the second-largest brain of all oceanic mammals, and their communication manners are outstanding.

Here are some facts about orcas to explain why people ask, “Are orcas smarter than humans?”

The orca whale’s social intelligence is impressive, showing it can adapt to its environment. Their large and complex brains allow them to perceive the world around them and communicate effectively. They are also regarded as the most sophisticated animal in the world when it comes to communication.

Orcas communicate using a wide range of sounds. According to research conducted at Cambridge University in 2001, killer whales’ intricate cultural practices and vocalizations are not reliant on humans and instead show a development of the animals’ cultural capabilities.

Researchers have shown that orcas exposed to bottlenose dolphin calls begin to mimic such calls. As a result, different species of animals likely speak distinct languages.

NOTE: The authors of the study say further investigation is required to verify the connection between the dialects of these two species and their communication.

Are orcas more intelligent than humans? Still, humans are created more intelligent than any animal creatures. However, besides being emotionally and socially complex, orcas are also known for their large, complex brains. They are the second-largest brains in the animal kingdom, behind sperm whales.

Most intelligent animals have large brains, such as:

It’s not just the size of the brain that makes orcas bright. They also have characteristics that distinguish them from humans. Scientists believe specific measures of the brain’s structure can be used to study how it relates to cognition. One of these is cortical thickness, a measure of the cerebral cortex.

This brain region involves various cognitive functions, such as memory and attention. Although cetaceans have large brains, they are not as thick as humans or primates. Their cortices are also different from those of humans and primates.

Which Is Smarter, A Blue Whale Or An Orca?

Killer whales and blue whales do and can do very different things. Even though they have some things in common, we can’t say which one is smarter. Scientists have been wondering if they can figure out how intelligent an animal is by watching how it raises its young.

Orcas are very good at showing their young how to do things right. It includes hunting seals in groups or getting on top of them and sliding back into the water.

On the other hand, blue whales are also known to teach their young how to navigate long distances, which means learning how to find their way around huge oceans.

What Is The IQ? Of An Orca?

Unlike humans, animals can’t have their IQs measured. On the other hand, although orca intelligence is not as highly studied as that of bottlenose dolphins, it has been estimated that orca EQ is around 2.5.

Also, Toni Frohoff, the head of research at TerraMar Studies, is certain that orcas are not intellectually challenged despite the lack of research on their intellect compared to bottlenose dolphins.

Since orcas are the biggest members of the dolphin family, they must have higher intelligence, according to Frohoff.

What Makes Orcas So Smart?

One of the most intelligent animals in the dolphin family is the orca. They spend their lives in groups and pods, hunting together and raising their young. They also share responsibility for looking after injured or sick individuals.

Orcas can learn complex linguistic abilities as well. The usage of languages by whales has been held up as evidence of cultural sophistication among animals.

Each orca’s pod has a unique set of sounds that can be distinguished from great distances. They use a type of hunting and communication known as echolocation, which involves sending loud noises into the water and listening for the ones that echo back.

FUN FACT: Echolocation allows the animals to determine the direction and shape of objects in the water.

Since orcas have their unique language, it’s plausible to suppose they have the linguistic and cultural intelligence to pick up a new tongue. They can communicate more simply because their vocal cords are so similar. Their size makes it more difficult for them to do so.

Nevertheless, it is not sufficient to assert that killer whales have different vocalizations just because it is known that these whales can acquire their languages. Research examining the animals’ propensity for learning would be necessary to establish this.

Orcas are the second most numerous animals on earth after humans. In addition to being very efficient predators, they are also well-adapted to various climatic situations.

Nevertheless, the question “Are orcas smarter than humans?” is already answered here in this article. ​​Killer whales or orcas are renowned for their intelligence, yet humans have a greater IQ than these creatures.

But to be fair, regardless of whether we are smarter than killer whales, orcas still possess other remarkable qualities that contribute to their intelligence. 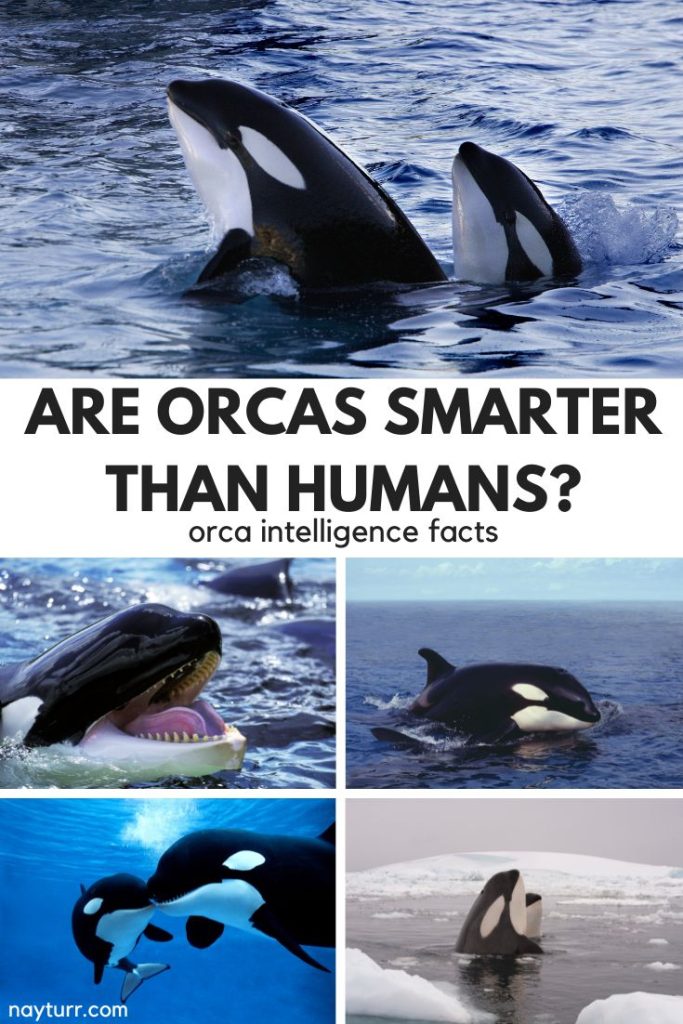