If you watch dolphin shows, you may be wondering how intelligent dolphins actually are. Animal intelligence is a subjective issue. The most intelligent canine breeds, chimps’ ability to behave like humans, and octopus problem-solving are often discussed. But dolphins are one of the most gifted species on the planet. So does that mean they can be smarter than humans?

The dolphin is one of the most intelligent creatures on this planet. However, they do not have the same cognitive abilities as us humans. Therefore, dolphins are not smarter than humans.

Who Is More Intelligent: Human Or Dolphin?

Recent studies of animal intelligence have consistently shown dolphins to be among the most perceptive of all marine mammals. Regarding their brain capacity, dolphins are second only to humans when performing cognitive activities.

According to the standards used to measure intelligence, dolphins are considered some of the world’s most intelligent animals. Although it is difficult to determine precisely how intelligent these animals are, several studies have shown that they can perform at a higher level. However, they can only come second to humans in terms of intelligence.

Over millions of years, dolphins’ bodies, minds, and sensory systems have adapted to survive underwater. Despite their differences, they are surprisingly similar to humans.

FACT: There are signs of intelligence in the actions of dolphins and whales. They acquire information individually, which boosts their capacity to impart it to others.

One of the most significant aspects determining a creature’s capability is its brain size. A sperm whale’s brain may weigh up to 20 pounds, making it the heaviest of any animal on earth. Even basic motion needs a lot of processing power.

The average bottlenose dolphin’s brain weighs 3.3 to 3.7 pounds, making it heavier than a human brain. Having a large brain helps free up some room for more complex cognitive tasks, and scientists believe that having a larger brain may help improve one’s performance.

The magnitude of a dolphin’s brain was the subject of research in 2002, whereas the encephalization quotient (EQ) was investigated. The EQ is a way to compare how big or small a species’ brain is to the brains of other species with the same body size.

The researchers concluded that dolphin brain size is comparable to other intelligent mammals, including:

The study found that humans had the greatest encephalization quotient. They were followed by:

The research found that these animals have a greater encephalization quotient than their human near cousin, Homo habilis.

Jason Bruck, a Ph.D. student, went on a trip that gave him the chance to study dolphins’ amazing memories. He discovered that the dolphins can still recognize each other’s whistles even after being apart for decades. The results back up the idea that dolphins are smarter than other animals.

Even though people have different faces, dolphins are known to be able to recognize them for a long time. Their whistle, which is how people know who they are, hasn’t changed in decades.

Bruck says that the results show that dolphins can remember things in a way similar to how humans do. The results have brought up new questions about how clever the animal is. Read more about this study here.

What Is The IQ Of A dolphin?

IQ is a way to measure how intelligent people from the same culture are. The IQ test doesn’t work for dolphins because they are so different from people.

Are dolphins more intelligent than humans? Dolphins can understand some parts of our language.

A dolphin can understand many parts of a sentence. For instance, they can distinguish between words such as:

They can also identify ideas such as:

Furthermore, they can understand future and past tense using words such as:

Also, bottlenose dolphins can tell the difference between things of varying hardness and density.

FUN FACT: Some dolphins figure out how to use echolocation above the water by swimming at a certain speed underwater. It lets them make a wave over their melon, which focuses the sound beam in the air.

Dolphins Can Recognize Themselves

With this trait, you may again ask, “Are dolphins smarter than humans?” A mirror-self-recognition behavior is a sign of self-awareness that can be seen in various animals, such as:

Both dolphins were able to pass their children’s-age mark exams. As a result, they exhibited self-awareness in a mirror much earlier than other animals.

Dolphins Have an Unusual Way Of Hunting

Recent research found that some bottlenose dolphins in Western Australia had evolved a unique food foraging method. They begin by seizing sponges, which they later carry in their beaks when they are underwater.

These dolphins, known to dive to the bottom of deep channels, use their beaks to drill holes in their sponges and catch tiny fish from the ocean floor. After this, the foragers drop their sponges before picking them up again.

FUN FACT: In another study, researchers said that female calves are more likely than males to learn how to use sponges. The study also noticed that the sons don’t seem as eager to try sponges as the daughters.

The researcher thinks that since sponging is a solo activity that takes a long time, it may be why male dolphins don’t give up on their desire to be with females. Also, the findings noted that even though spongers live alone, they have babies at the same rate as dolphins that don’t use tools.

To summarize the question, “Are dolphins smarter than humans?”, researchers have shown dolphins to be very intelligent, ranking among the top marine mammal species.

The brains of bottlenose dolphins are over 3 pounds, making them heavier than human brains. The size of their brains helps them do better at mental tasks. Nevertheless, regarding cognitive abilities, dolphins are only second to human intelligence level.

Check out our other articles about the intelligence levels of different animals below: 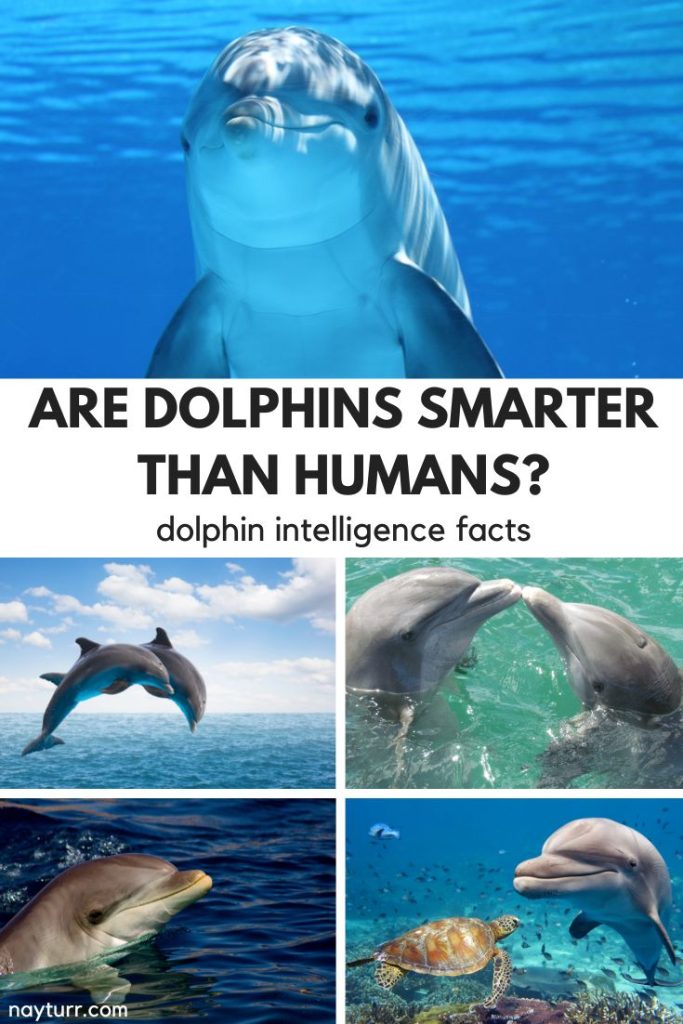