Orangutans are the biggest tree-dwelling animal on earth and the only great ape that is primarily arboreal. The orangutans are extremely smart.

Scientists have shown that we share 97% of our DNA with orangutans. Some of the great traits that make these creatures smart is their ability to:

Read on to find out the full comparison between humans and orangutans.

Are Orangutans As Smart As Humans?

University of Pittsburgh molecular biologist Jeffrey Schwartz and Buffalo Museum of Science director John Grehan contend that scientists only examine a tiny fraction of the whole genome when comparing humans and chimps.

Orangutans, like other apes, are tool users. These creatures may not be born knowing everything, but they have a remarkable capacity for learning.

Wild orangutan moms can teach their young a wide range of abilities, such as:

The orangutan’s intellect is often regarded as one of the primary factors contributing to the primate’s high status. Chantek is one of the most well-known cases of this. He started using signs for words and eating solids at nine months old.

An orangutan baby is carried and raised by its mother until they are around seven years old. During this time, the mother provides the infant with all the necessary information, such as dietary recommendations.

The babies are often dependent on their mothers and are usually kept sleeping on their backs. The longest birth gap in the world for a terrestrial mammal is 7 to 9 years for the orangutan.

Orangutans Have The Same DNA As Humans

We share the same DNA as orangutans. Scientists have shown that we share 97% of our DNA with orangutans. It is a significant gap compared to the 99% sequence similarity between chimps and humans.

The orangutan’s genome sequence is the third non-human ape to be completed, after the rhesus macaque and the chimpanzee. Orangutans and humans have similar DNA structures, although the former has developed faster than the latter.

FACT: Orangutan genomes also tend to have fewer major DNA rearrangements than those of humans and chimpanzees.

How Intelligent Is The Orangutan?

Find out how intelligent these creatures are and why some compare their intelligence to humans.

The ability of an orangutan named Rocky to imitate human speech has provided scientists with new insights into language development.

Dr. Adriano Lameira, an anthropologist at Durham University who was part of the study team that taught 11-year-old Rocky, said that great apes are exceptionally good at this game of “do as I do.” He said Rocky would respond to their voice by adapting his tone and pitch to match theirs.

This discovery, published in Scientific Reports, could help us learn how language evolved.

Orangutans Can Talk About The Past

Are orangutans smarter than humans? They can speak about the past as humans do.

NOTE: New research shows that other primates can also make displaced references. It suggests that humans may not be the only ones capable of doing so.

In a study published in Science Advances, researchers asked seven orangutan mothers to make themselves believe they had spotted a predator by putting on tiger stripes and other colors. They then observed and documented 24 scenarios.

As concluded, some of these included 12 instances in which the mothers yelled warnings to their babies, while the others were not.

Orangutans Can Use Tools

An orangutan can be taught to use tools to build small buildings while living in captivity. After being released back into the environment, the animal was seen to utilize the same tools to construct a structure identical to the one it had previously discovered.

Leaves are used to make gloves for thorny fruits. Similar findings were discovered at Borneo’s Tuanan site. Also, studies have shown that flexible tool use can improve mental processes, such as planning for the future.

A group of biologists and psychologists conducted a study on chimpanzees and found that they carefully consider their options when it comes to food. For instance, they could compare the quality of the food rewards they received with those they had.

In Borneo and Sumatra, where they live naturally, orangutans have to think about many things when choosing what to eat. Some of these things are:

NOTE: It’s unclear how they can adjust to the changes that using a tool will bring.

Are Orangutans The Second Smartest Animal?

Orangutans are far and away the smartest of the great apes. They can effectively find solutions to problems.

Various studies have been conducted on the intelligence of different animals. Scientists have tried to determine how well a species can solve problems. A group of researchers concluded that if intelligence is assessed in terms of problem-solving abilities, then the orangutan would win.

An orangutan’s doggedness is an innate trait that allows them to endure even the most difficult problems. They will continue to fight for their interests even though they have lost.

An orangutan is more likely to identify a problem than a gorilla or chimpanzee. It will spend some time working on the issue until it is resolved.

Chimpanzees are very aggressive when getting their hands on a screwdriver. On the other hand, an orangutan will let go of the object and walk away.

Orangutans are smarter in some ways than humans. They can:

Although they may not be born with the necessary skills to do so, they can still learn new things through their mothers. For instance, wild orangutan moms can help their young build nests and use various other items. 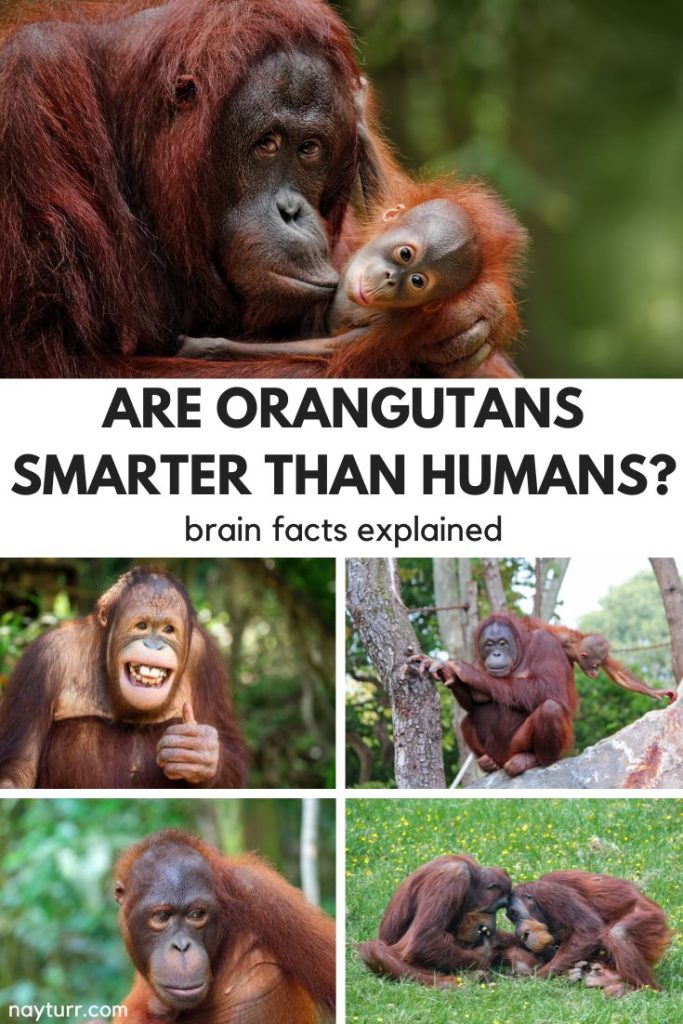