It’s a known trivia that there are three hearts in an octopus, and its brain is in the shape of a doughnut. But does that make it smarter than humans?

A study has shown that the DNA of an octopus contains a genetic code similar to humans. It’s believed that certain transposons influence an animal’s intelligence in its brain. This means that octopuses can be as smart as humans or even more in some ways.

Learn from this article how the octopus’ brain can be smarter than a human brain in some instances, and some more fun facts, like the fact that an octopus has blood that is a deep blue color!

Are Octopuses As Smart As Humans?

Scientists have long known that octopuses are capable of being incredibly smart. A new discovery suggests that their intelligence is related to the molecular structure of the human brain.

The genome of humans contains numerous transposons, which are capable of moving around the genome. The genome of the California two-spot octopus is over 2.7 billion base pairs in size, making it almost as massive as that of humans.

However, they found that it had more than 30,000 protein-coding genes, which is more than enough to equal the human genome.

NOTE: Expanding many gene families in the octopus may provide light on the animal’s evolution toward a higher degree of neuroanatomy.

How Are Transposons Linked To Octopus Intelligence?

Transposons are genetic sequences that aid in the control of cognition. The octopus is a brainy creature with sophisticated smarts. Scientists have uncovered a clue that may partly explain the cephalopods’ remarkable intelligence.

Transposons, which are very little bits of DNA, make up about half of the octopus genome. The term “jumping genes” was initially used to describe them. They grew in number by apparently migrating across the genome.

Recent research indicates that octopus DNA shares a genetic oddity with humans. The study has linked certain transposons in the octopus brain to the creature’s intelligence. Some of these transposons are also present in human brains.

A researcher and biologist at the Stazione Zoologica Ponte Anton Dohrn in Naples, Giovanna, leaped on the chair the moment she observed a significant indication of movement in the vertical lobe of an octopus. She claims that this part of the brain is similar to the hippocampus in humans and is where learning takes place.

What Makes Octopus Smart As Humans?

Here are some facts about how the octopus can be as smart as humans:

The Octopus Can Defend Itself

Not all humans can camouflage to defend themselves, but octopus can.

First, we’ll talk about how octopuses defend themselves.

It is well known that they use camouflage strategies to ward off predators like birds and fish. The feel and look of their skin may be altered to better fit in with their natural surroundings.

FACT: An octopus will always look for a dark, secluded place to take refuge, such as an aperture or under a rock.

Some forms of life construct homes by scooping sand and stones, while others wrap themselves with shells and rocks. One such species is the coconut octopus, which is also noted for carrying coconut shells within its body.

Are octopuses smarter than humans? Not all humans are great hunters, but the octopus is!

Octopuses are specialized hunters that utilize different strategies depending on the kind of prey they’re after. Octopuses are well known for their unique body, which includes eight limbs used for:

An octopus can seek and attack a broad range of marine organisms, including:

The animal’s prowess at hunting and hiding in the environment makes it easy to locate and devour prey. It can reach out with its arms and see what’s in its environment, allowing it to taste and explore.

Octopuses Can Use Tools

Are octopuses smarter than humans? Not all humans are resourceful, but guess what?  The octopus is very resourceful.

Researchers discovered that the veined octopus demonstrates additional tool skills by putting together coconuts. Compared to other item manipulations by octopuses, such as utilizing rock to obstruct a lair entrance, this supports the behavior of tool usage.

The report concludes that, in the end, it seems likely that the collection of how animals use things will form a continuum from insects to primates, with the definition of tools.

But the fact that this octopus was found tiptoeing across the seafloor with its prized coconut shells shows that even marine invertebrates do things we used to think only humans did.

There is evidence that octopuses can identify non-conspecifics, including human faces. Some animals and birds are capable of this behavior as well, so it’s not unique, but it is still very unusual.

According to a report in Scientific American, a caged octopus at the New Zealand University of Otago attacked a staff member. The octopus shot a jet of water at the individual every time she walked by the tank.

Meanwhile, scientists at the Seattle Aquarium tested the ability of a giant Pacific octopus to recognize people.

For two weeks, one person fed a group of octopuses regularly while another handled them with a bristly stick. After the trial, the animals responded differently to the “stick handler” and “food handler,” indicating that they could identify them despite wearing similar uniforms.

Octopus’ capacity to identify people expands our understanding of their visual learning abilities. Any training paradigm should address individual recognition since it may change octopus responses.

Is The Octopus The Smartest Animal?

The chimpanzee comes in first place in the ranking of the most intelligent animal’s ability to communicate with people through sign language, which they can learn. Humans have been captivated for a very long time by the amazing mental capabilities of this animal.

Nevertheless, the Coleoidea subclass is considered the most intelligent of the invertebrates and an important example of advanced cognitive evolution in animals. It includes:

Despite not being the smartest animal, these creatures can handle various tasks and responsibilities with remarkable intelligence. Proof of how smart they are lies in their:

It’s been proven that the octopus is incredibly smart. A new study claims that their intelligence is related to the structure of the human brain. 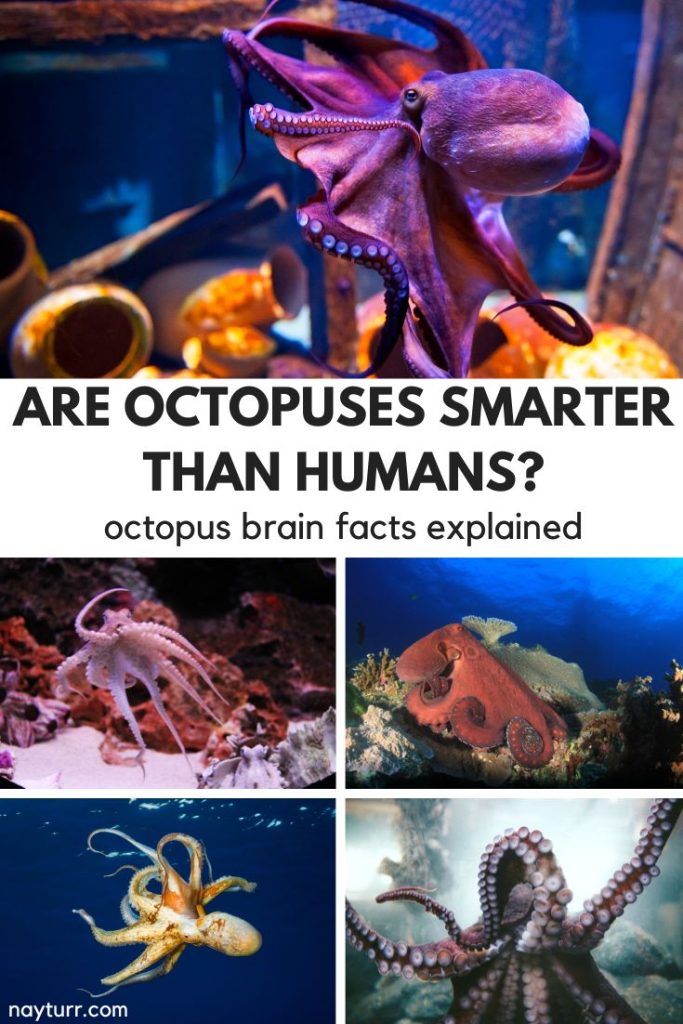