A jungle is a wild place where dangerous species thrive in dense thickets. It is always bursting with life a complex feral life competing for survival. But did you know that animals are not the only dangerous residents of a jungle?

In the deep and thick forest lies a fair share of pretty but dangerous jungle plants. Dangerous Beauty is not a metaphor in jungle life. It is a prevalent reality.

Plants, like most living organisms, have their own natural defenses. They are often hidden in strikingly beautiful and colorful flowers. Some of them lie in unpresuming fruits. Underneath these beauties and pretentious edibility lie toxic chemicals that are unforgiving for animals, insects, and even humans. Some jungle plants sprout to kill!

You can find hundreds of jungles scattered across the globe. Each of them has personalities that are distinct from their locality. Wildlife thriving in the forest differs across the region. Here are some of the dangerous jungle plants you should know about:

If you are not a very keen explorer, the Gympie-Gympie will appeal to you just like any ordinary berry brush. It has wide leaves that usually have a deep green hue. The berries are bright purple like most wild berries. The only difference is the translucent hair that covers the stem and leaves of the plant.

It contains a toxic substance moroidin that can kill insects, birds, or animals that ingests them. It is also fatal when it comes to contact with humans. If you are lucky to live, you will suffer its painful effect for up to a year!

This stinging brush is native to the rainforests of Northern Australia and India. Accordingly, it creates pain so excruciating that it can drive a person mad.

Every inch of the Oleander spells trouble. Even a tiny percentage of any of its parts is enough to kill an animal that ingests it. The smoke from burning twigs and leaves can cause cardiac abnormalities. In most cases, this leads to nowhere else but death.

Today, people cultivate this plant for ornamental purposes because of its beautiful cluster of white, yellow, red, and pink blossoms. But even its flowers contain toxic substances. When bees use their nectars, the honey created from them will also turn poisonous.

The Nerium Oleander is mostly surviving in temperate and subtropical jungles. Some of their species are present in the Mediterranean region, Asia, and the Arabian Peninsula.

For something medically beneficial, the Castor bean holds a dark side. They are an effective treatment for wounds and have laxative properties. Castor oil is also present in some of our foods, soaps, and cosmetic products. The problem is, when a castor seed is broken down, it produces a toxic substance called ricin.

Ricin is more poisonous than venoms and cyanides. Traces of ricin lace its beautiful leaves and pom-pom flowers. The Castor bean is so deadly that the Guinness World Records named it the Most Poisonous Plant in the world. It can cause gastrointestinal disturbances and cell death.

The castor plant is grown domestically as ornamental plants. But they are also abundant in the jungles of India, Eastern Africa, and the Mediterranean Basin.

When you think of dangerous jungle plants, the Venus Flytrap would probably get into your mind. They are the creepy-looking flowers with trigger hairs that resemble sharp teeth. This plant is pretty smart for a carnivore. When something lands on its petals, it will not automatically trap the foreign object until after few successive movements.

It is to ensure that the prey is edible and not just some sort of unwanted debris. They may be harmful to smaller insects, with ants as their favorites. But rest assured that these dangerous jungle plants do not feed on humans!

Venus Flytraps are rampant in the wilds of North and South Carolina. However, these plants are facing the danger of extinction. It is partly due to habitat destruction and harvesting them for ornamental reasons. Today, the National Wildlife Federation considers adding the Venus flytrap in its list of endangered species.

If Venus Flytrap is unmerciful to bugs and insects, the Pitcher Plant is more ruthless to bigger animals. These uncanny killers cannot hide the evidence. Thus, they were caught red-handed for murdering rats.

As the name suggests, its body forms a deep pitcher. It is deep enough that prey will not be able to climb back up if they fall into the trap. Then the plant will drown the animal and dissolve it with its digestive enzyme. But their enzymes do not digest bones, hence, the shreds of evidence in their bodies.

The pitcher plant is endemic in a tropical rainforest-like the Philippines. They are perhaps one of the most dangerous jungle garden plants for rodents and smaller animals.

Everything in the jungle has its strategies for survival, but this scheming orchid takes their game to the next level. Its dark purple blossom resembles a female wasp. This way, it can trick a Turner Wasp for pollination.

It even releases pheromones similar to the female wasp to lure the male wasp to come into contact with them. They are not physically harmful, but this fraudulent flower is such a sly pretender. They make it on the list of dangerous jungle plants for tricking the wasp into reproduction.

These orchids live in Western Australia. They are not in danger of harvesting, but they are depopulating because of climate change.

When a cannonball strikes, you will be out of the light. The same phrase applies to the effect of a cannon tree. It blends with Brazil nut, but it is one of the dangerous jungle plants that explorers should look after.

They have hard and heavy fruits growing straight out of their trunks. They are called the cannonball tree because they would fall down the ground in a loud explosion. The explosion may frighten you, but they will not hurt. The problem is when you are passing right underneath them and get hit head-on. A falling cannonball fruit can cause a fatal injury.

These trees commonly live in the tropics. They are abundant in the tropical rainforests of South and Central America. But they are also available in India, where they are highly regarded as a sacred tree.

Jequirity or Rosary Pea symbolizes love for the Chinese people. Hence, they are also known as the mutual love bean. But the scarlet beans of this seemingly harmless pea have no love in its shell for animals and humans. It contains abrin, a milder poison than ricin.

They are absorbed slightly slower in the digestive tract than ricin, but they are fatal nonetheless. The black and red seed that resembles a ladybug makes fine jewelry because of its hard shell. But accidental pricking of the seeds when threading the jewelry sometimes can cause untimely death.

These dangerous jungle plants invade the forests of Belize, the Caribbean, Polynesia, and Hawaii.

Cardiotoxins and neurotoxins make up most of this purple flower that resembles a friar’s cap. They are mostly used as a poison for arrows when hunting wolves; hence, the name wolf’s bane. Just a few drops of the sap of this plant, especially the roots, can cause cardiovascular paralysis. They also interfere with respiratory functions that could lead to eventual death.

In the Middle Ages, people used these dangerous jungle plants as an ingredient for love potions. However, they seemed to offer no result other than killing the love subject. For this reason, they also earned the nickname Mourning Widow.

Lakhvinder Cheema is one of the unsuspecting victims of the wolf’s bane. In 2010, his lover Lakhvir Kaur Singh later known as “The Curry Killer,” laced his curry with aconitum. Cheema did not survive.

It is gigantic and it is stinky. The rafflesia flower earns its reputation of being the largest flower in the world by its giant body. However, its stench is not the reason why it is called a corpse flower. It’s the fact that rafflesia is not a flower but a parasite. It does not have any root or stem system.

Instead, it feasts on the roots of dead trees using its long thread of tissue. It will then bloom for a good five days while releasing the unsavory smell of decay before dying. The scent of rotting flesh is a ploy to attract flies so it can reproduce its parasitic bloom.

Rafflesia thrives in the forests of Southeast Asia. Despite its nasty smell and monstrous look, rafflesia is adorably nicknamed the “Giant Panda of the Plant World.” 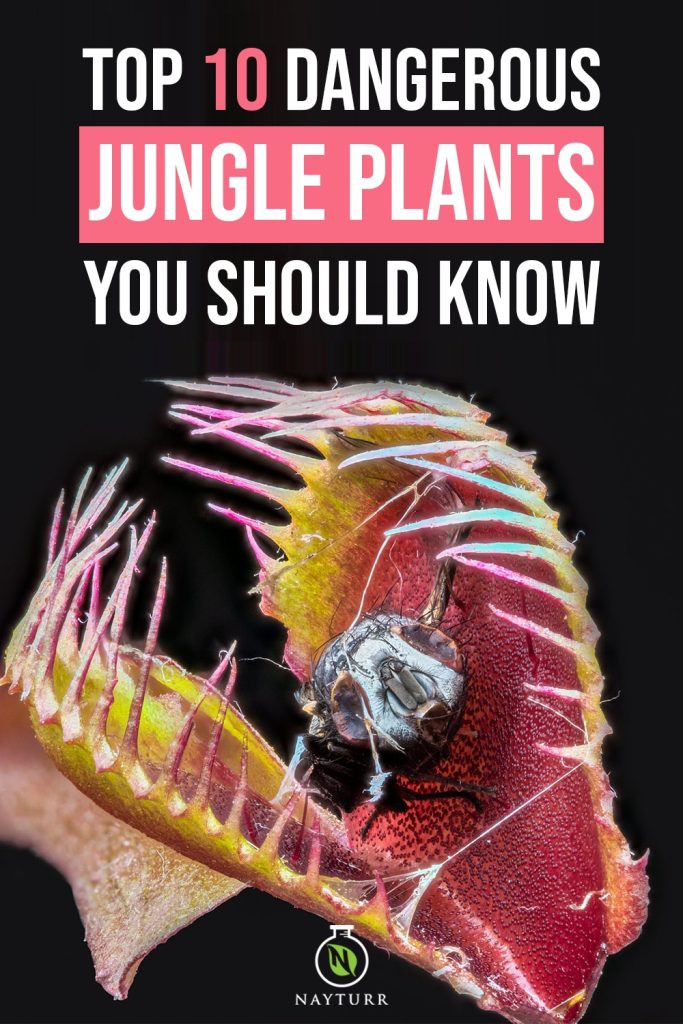