Animals are amazing creatures and many of them do very well on their own. However, there are a few animals that need humans to survive.  There are some who would disagree with this as they believe that all animals can survive on their instincts, but this is not the case with some animals. So which animals if any need humans to survive?

Most domesticated animals need humans to ensure their survival including:

We will learn from this article which animals need humans to survive and the reasons behind it. You may just be surprised at what you read today!

What Animals Would Not Survive Without Humans?

All animals are programmed to live without humans. However, some animals only live for a few years and don’t reach their total life spans due to their physical limitations and being out in the wild.

There are also those animals that have been bred to serve as food for us, and therefore need our continued help to stay alive as they are brought up differently from those that live in the wild.

We have highlighted the most common animals that need humans to survive.  Check out our list below.

To answer the question of which animals need humans to survive, chickens are of course on the list. Chickens raised for food couldn’t survive without people because of how they are bred. They are kept in small spaces, with food given to them at certain times, and with extra added to their food.

Non-domesticated chickens, on the other hand, would undoubtedly thrive well in the wild. They can consume nearly everything, and they can have numerous chicks at the same time. In the woods, they would be less likely to suffer difficulties such as their lack of flight.

​​When faced with various predators, chickens have little chance of survival because their inability to fly is a weakness. Most predatory species will eat chicken when given the opportunity. It is why owners must keep them inside their coop. They can only thrive and multiply in the presence of humans.

Cattle are animals that need humans to survive as well. While other cattle breeds have a better chance of survival, dairy breeds are more likely to go extinct because a great deal of energy is needed to create large quantities of milk.

Related: Check out our related article, “20 Different Types of Cows from Around the World“

Due to the forced evolution of cattle over a short time period, cows now have a pelvis that is very narrow compared to the size of their babies.  Because of the narrow pelvic opening, a lot of cows would die due to birth complications.

People are vital for cows’ health because we give them the food and space they need to make milk and we are here to help them survive birthing their young. Cattle bring many advantages to humans; thus, this is a good relationship for both species.

On the other hand, it’s possible that “modern cattle” could make it in the wild, although their chances would vary depending on the breed and the setting.

Research indicates that Bos indicus and Bos taurus cattle retain their productive traits while also tolerating parasites and thermal conditions. Studies have been conducted on the genetics that can withstand tropical and subtropical climates.

Bos indicus, sometimes known as zebu, are South Asian cattle adapted to living in hot climates. They would likely flourish in the local tropical and subtropical climates without much trouble. However, they may perish in a desert or a region with harsher winters.

Similarly, Bos taurus (European cattle, most US cattle) thrive in colder winter climates, but suffer, particularly as calves, in the warmer more humid climates of the tropics.

Dogs are human’s best friends. We breed and adopt these loyal animals. Domesticated dogs are very much in need of humans to survive. Despite their strong build and powerful fangs, many dogs would not make it in the wild because they are too dependent on us to know what to do.

Unlike most human children who grow up and become independent, dogs depend on their human caretakers for their entire lives for things like:

As a result, they can only get access to reinforcers if they behave appropriately within the context of the human social environment.

NOTE: It’s common for people to take in stray dogs because they want to ensure the animals’ safety. Dogs that are well cared for by humans have an increased chance of living longer.

Cats are little lions; they are the smallest of the Felidae family and are on the list of animals that need humans to survive. They share the lions’ fierce independence and bold nature.

Cats are known for being independent, but contrary to what people may think, domesticated cats need to be with people. Cats rely on humans for basic needs like food and shelter.

In 2017, Dr. Vitale and her colleagues researched and learned that cats often prefer human company over food and toys. Likewise, researchers in 2019 discovered that cats modify their behavior depending on the amount of attention they get from their owners.

Despite their sometimes grumpy and fiercely independent demeanor, cats are:

Sheep can indeed thrive without human intervention. The issue is that sheep are unable to thrive. They need humans to intervene so that they can continue to breed and stay alive.

Sheep are prey and they have numerous predators, including:

The herd mentality they exhibit, however, is well-documented. The herd follows whoever is in charge. When there is a strong leader in the pack, these animals will follow them without question, which is good for their survival.

Also, the mouflon, the wild progenitor of domestic sheep, has wool that stops growing when it reaches a certain length.

However, for all other sheep, the wool does not stop growing.  If sheep are not sheared they can get a build-up of urine, feces, and dirt in their wool.  This can cause bacterial infections and possible parasitic infections.

Humans breed sheep to use their wool. A sheep should be sheared in the warmer months as the wool can matt. If their wool is too long, the warm weather makes it impossible for them to get comfortable, and can even be fatal to some.

The well-being of domesticated animals depends on their owners providing them with:

Humans may experience a unique bond thanks to these animal companions. Pets help people’s health in several ways, such as:

Many domesticated animals have had their genes changed so much that they can’t live without human help for long periods. Therefore, pet owners, farmers, and production plants must ensure that their animals have:

However, all life forms are dependent on animals for their survival. Without them, we would not be able to function properly. Animals help plants and humans meet their various needs. Therefore, people and other animals live together, benefiting both species and the environment. 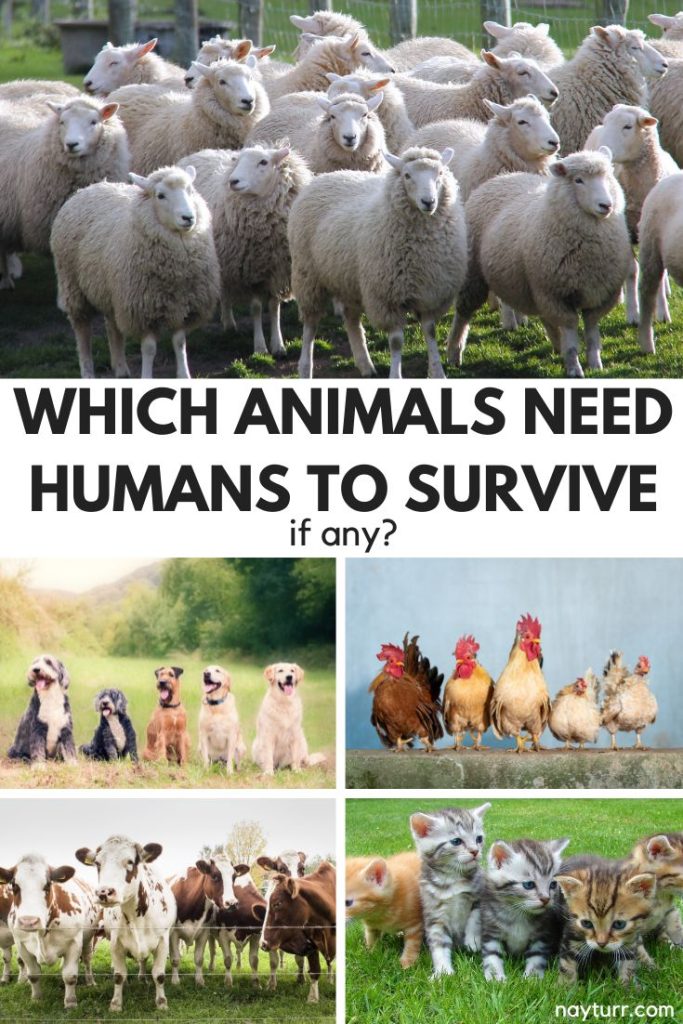