Do you ever wonder which animals can only survive in the cold? While some people just can’t bear the cold, some animals thrive in cold temperatures! These living creatures have evolved in unique ways that help them survive harsh winter conditions.

Due to thick fur, the following animals can live in one of the coldest places on Earth:

Some animals can freeze themselves and still live in temperatures below zero, such as:

Which Animals Have Freeze Tolerance?

Although every organism needs heat for survival, there are animals that can tolerate extremely cold temperatures in their habitat.

Some animals have developed remarkable abilities to endure the harsh winter conditions at the poles. Here are some examples:

How Do Polar Bears Survive In The Cold?

Polar bears are animals that can only survive in the cold. Over the last 250,000 years, the polar bear, a descendant of the grizzly bear, has evolved to thrive over ice-covered oceans. The ice and animals of their domain are essential to their survival, just as they were for their grizzly predecessors.

Polar bears, who live in one of the coldest climates on earth, survive because of their thick coats. Fur grows on the soles of their feet to keep them warm. Their white fur provides camouflage and keeps them warm by absorbing the sun’s warming rays.

How Does The Arctic Fox Survive In The Cold?

The Arctic fox, native to the tundra and sea ice, is well-adapted to its environment. This animal’s thick fur coat helps keep it warm even while it travels through the cold.

In the treeless areas where they thrive, Arctic foxes can withstand temperatures as low as -58 degrees Fahrenheit. They survive the freezing temperatures by digging a tunnel under the snow to keep warm during blizzards using their:

However, climate change poses a threat to the Arctic fox. Its habitat is decreasing, its prey is becoming less abundant, and it faces competition from the red fox. As temperatures rise, the animal is also moving north.

When Arctic foxes lose access to sea ice, they may become so desperate for food that they go into human settlements and industrial areas in search of it, increasing the likelihood of encounters with people and, ultimately, fox deaths.

How Does The Emperor Penguin Survive In The Cold?

​​Emperor penguins are among the most remarkable animals that can only survive in the cold. They live their entire lives in Antarctica, where they endure the cruelest winter in the world. The temperatures there can reach as low as -67 degrees Fahrenheit, and blizzards can last for days or weeks.

By nature, the circulatory system of the Emperor penguin’s body allows cold and warm blood to flow in opposite directions. Their thick feathers protect them from the cold environment. An emperor’s large, robust feet have powerful claws that help the animal move on the ice.

How Does The Musk Ox Survive In The Cold?

Musk oxen are known to forage on lichens, roots, and mosses on the tundra all year round in the Arctic. Because of their long hair’s tolerance to the cold, these creatures have survived for thousands of years.

FUN FACT: Guard hairs are the outermost covering of their skin and help keep them warm in the cold months. As the temperature rises, their outer coating sheds.

However, during two trips to Greenland in 2013 and 2015, the scientists came across the musk oxen struggling to survive.

Scientists are worried that the survival of the Arctic musk ox is at risk due to rising temperatures. Researchers from Denmark believe that musk oxen are more vulnerable to climate change than polar bears.

Chionophiles are organisms that have unique adaptations that allow them to endure harsh winter conditions. Chionophiles able to survive frigid temperatures of this category are:

Polar animals not only make it through some of the world’s most extreme environments but also thrive. Many Arctic species are well-adapted to cold climates; they include:

What Is The Coldest An Animal Can Survive?

While other animals can thrive in cold climates, among the animals and insects that can withstand negative degrees Celcius/Fahrenheit is:

Here are some fun facts about these creatures:

The Tardigrada also called moss piglets or water bears, are a group of small invertebrates that can live in very harsh environments. It was discovered that one of these water bears, named Mike the Durable, could withstand temperatures of -459 degrees Fahrenheit in a lab setting.

It’s also known that water bears can survive in environments as hot as 302 °F.

Arctic wooly bear moths, which are cream-colored, live in Canada, Greenland, and the Arctic Circle. It can switch between freezing, thawing, and consuming. It’s been said that this insect’s blood has sugar that helps protect its cells from the effects of cold.

These creatures can deal with the cold because their bodies and blood make chemicals that protect them from the cold temperature. This process lets Arctic woolly bear moths live even when their body temperature is below -94 degrees Fahrenheit.

The darkling beetle’s home in Alaska can get as cold as -76 degrees Fahrenheit in the winter. They can do something called “supercooling,” which keeps their body fluids from freezing in cold weather. This beetle can keep the fluids and tissues inside of it from freezing.

This is how this tropical beetle stays alive even in extreme cold. Sugars dissolved in the beetle’s blood make it possible for them to live through the long winter months when their metabolism is much slower.

Some animals can survive in cold regions, even though all living things require heat. Among these animals that can only survive in the cold are:

Foxes tolerate the cold by burrowing and using their short muzzles, hair, and ears to stay warm.

Animals can also freeze and withstand subzero conditions. These include:

There are even more species that can flourish in freezing climates, which seems impossible to humans, but is an amazing life for these creatures! 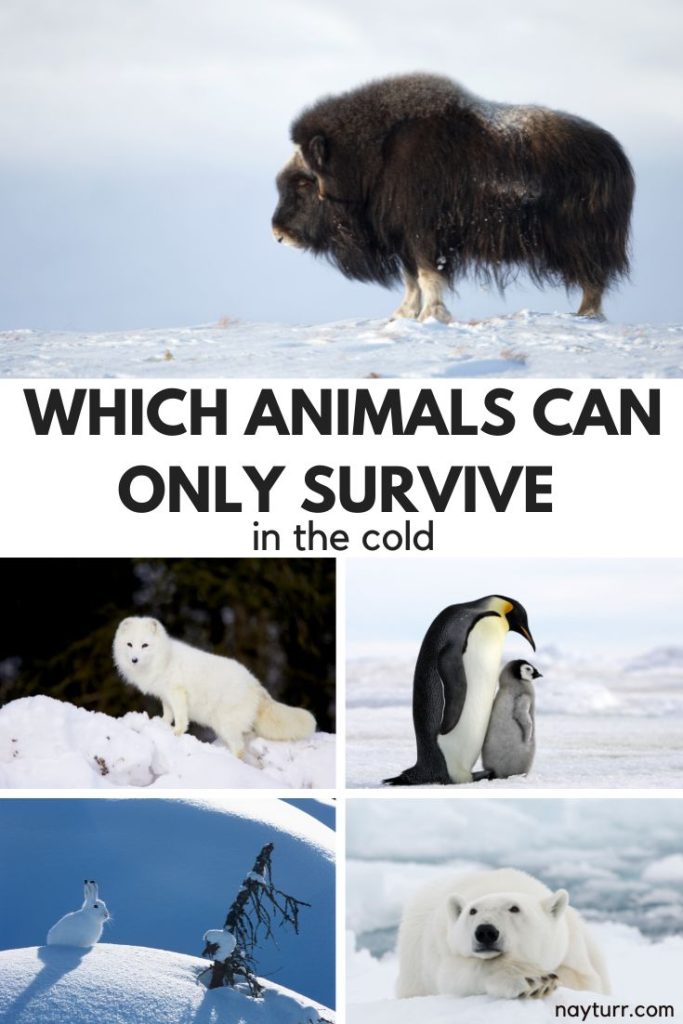