Do you ever wonder which animals need heat to survive? In physical science, heat is significant for all living things, particularly plants and animals.

Cold-blooded and warm-blooded animals both need heat to survive. Some animals need to maintain a steady body temperature, or they may die. These include:

Learn more about which animals need heat for survival in this article.

Why do Animals Need Heat?

Most warm-blooded animals, such as mammals and birds, must maintain a consistent internal temperature to avoid catastrophic repercussions.

Also, one of the most critical factors for animals when it comes to getting energy is the sun’s heat. They must have enough to nourish themselves, as their primary food sources are:

Without the sun, these plants can’t grow.

Which Animals Love the Sun?

​​Animals that don’t produce their own body heat sometimes use sunbathing as a method of maintaining a suitable internal temperature, such as:

Because of this, many of these creatures spend a lot of time floating near the water’s surface.

The ocean sunfish is a good example; scientists have shown that these fish spend around half their time at or near the water’s surface. Other animals who need sun and heat are the following:

Which Animals Need Heat to Survive?

It’s no secret that Earth has harsh climates, such as bone-chilling cold and searing heat. While most people can live in relatively mild temperatures, many microorganisms and animals can survive in challenging environments. Extremophiles are a group of microorganisms known to thrive in harsh environments.

Which animals need heat to survive? Here are some of them and why they need heat for survival.

Why Do Birds Need Heat?

Although warm-blooded animals can be active during winter, they need enough food to keep them warm. Birds, for instance, usually cannot find enough food when the temperatures fall. Because of this, many of them migrate to warmer climates.

The temperature of a bird’s body can change throughout the day based on:

FACT: It can be hard for birds to keep their high body temperature when it gets cold. Due to their size and surface area, smaller birds are more likely to get hurt.

Why Do Camels Need Heat?

Animals may live in the worst of conditions by adjusting to their surroundings. Camels, for instance, can survive in climates with very high temperatures and little humidity.

The large leathery coverings on a camel’s knees protect their legs from the sun. Although they can consume 32 gallons of water at once, they can go without water for many days if necessary.

The camel’s thick coat reflects the light during the day and provides excellent insulation at night. Their immune system is very effective, and their kidneys and intestines are adept at water conservation.

The intense heat caused by desert sand may burn the skin of camels. To prevent burns, they have leathery pads on their:

Additionally, they lack a stifle fold, the skin that spreads from the belly to the thighs. Under their bodies, air may flow while they are lying down.

Why Do Reptiles Need Heat?

Among animals that need heat to survive, reptiles are one of them. Depending on their habitat, several reptile species have varying thermal needs. Creatures such as snakes and lizards use different methods to obtain and retain body heat.

For example, reptiles that live in the tropics or arid regions need higher temperatures than their temperate-zone counterparts. Bearded dragons and leopard geckos, two desert-dwelling reptiles, are among the most sought-after exotic pets.

However, certain tropical reptiles, including Chinese water dragons and anoles, are more comfortable in warmer climates.

Why Do Amphibians Need Heat?

Like reptiles, amphibians make up the herpetofauna, and both groups are referred to as “herps.” They are all considered cold-blooded since they do not produce their own body heat.

As a result, they rely on social interactions with other animals to maintain a comfortable internal temperature. For instance, a turtle will lie in the sun with other turtles to get warm.

NOTE: Many basic functions of amphibians, such as metabolism and immune function, need various ambient heat sources. These creatures risk contracting an illness if their enclosure is too cold.

As a group, amphibians and reptiles have adapted to using the sun’s energy in various ways. Thus, providing your pet amphibians with the proper amount of light is essential for their well-being.

One of these is producing ultraviolet B radiation, which benefits human and animal health. In captivity, this can be done by producing heat or illuminating a vivarium.

The question of which animals need heat to survive may pertain to most cold-blooded and warm-blooded animals, as they need energy from the sun. However, certain animals mentioned here in this article are mostly dependent on heat:

To maintain a temperature higher than its environment’s temperature, an organism must perform various biological activities, such as:

Therefore, animals, whether cold-blooded or warm-blooded, need a sufficient amount of heat for survival. 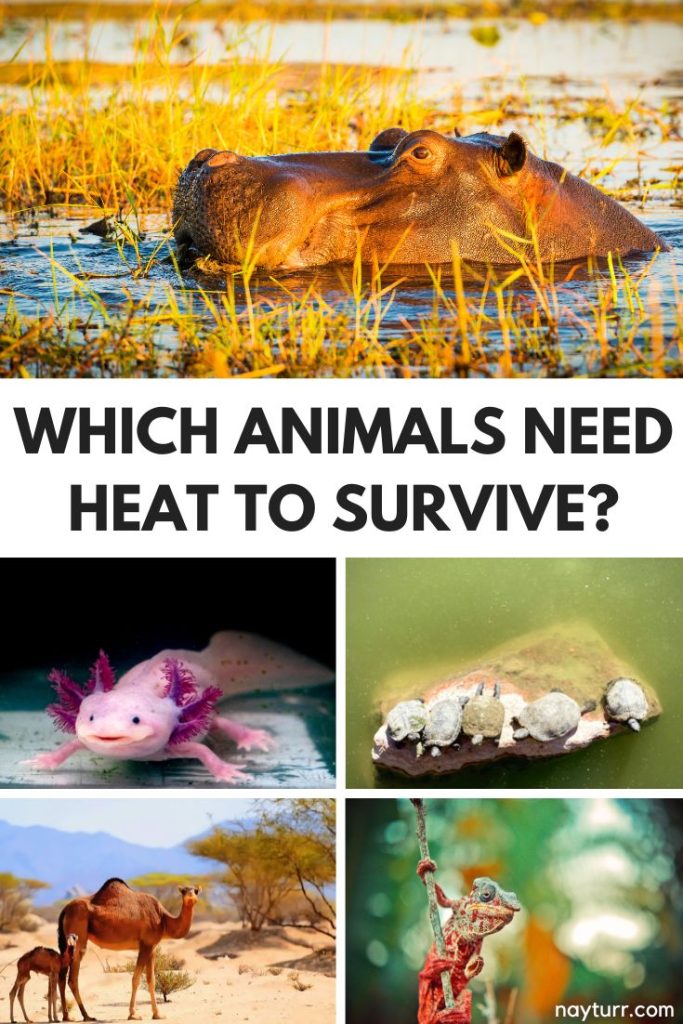