Are you curious about which other animals have periods besides humans? Overt menstruation, in which the uterus bleeds through the vagina, is mostly found in humans and very few animals.

Some animals do not go through the process of menstruation. However, the following animals have been recorded to menstruate:

Learn how these animals go through their period and others which do not experience menstruation at all.

Do Animals Get Menstrual Periods?​​

Except for the higher primates, all mammals go through periods of sexual activity called estrus. Only primates have menstrual cycles, which are regular periods caused by the loss of the uterine lining, or endometrium, once a month.

Do Female Animals Bleed During Their Periods?

This is to answer the question as to which other animals have periods besides humans. Aside from primates, very few animal species have menstruation.

Cats and dogs, for example, bleed and discharge when they’re in heat, but it’s nothing compared to the four to twelve teaspoons of blood and fluid that human women lose every month.

Meanwhile, the duration of the menstrual cycle in the spiny mouse is 8-9 days. Blood may be seen macroscopically on the external genitalia lasts for about 3 days and is comparable to that of other rodents.

Are There Any Other Animals That Get Periods?

A handful of Old World monkey and ape species found mostly in Africa and Asia, 3-5 species of bats, and the elephant shrew have been seen menstruating.

The first on the list of other animals that have periods besides humans are Old World Monkeys.

Most ape species that menstruate are in the suborder Haplorrhini. Even within this suborder, the menstruation of Old World monkeys (Catarrhini) is more obvious than that of New World Monkeys (Platyrrhini), which can sometimes only be seen with a microscope.

Only three species of New World monkeys have been shown to show outward signs of bleeding:

The term “Great Ape” refers to the large size of these primates. In addition to this, their brains are far bigger than those of other primates.

The great apes’ menstrual periods seem to be more regular and, in general, last longer than those of humans.

Menstruation has been shown to happen in gibbons, which are smaller apes in the family Hylobatidae. These animals look a lot like common monkeys from the new world, but they don’t have tails. This is what makes them apes rather than monkeys.

Lesser apes become sexually mature when they are four or five years old, and menstruation can start any time after that. Gibbons’ periods can last up to 25 days, but most of them only last about 3 days.

Other data also show that the gibbon’s menstrual cycle is shorter than was thought before. Hormone patterns during cycles of 19–22 days are consistent with ovulation. The female gibbon’s swollen genitalia can be used to track the progress of her menstrual cycle and figure out when she is likely to ovulate.

Aside from apes, another on the list of which other animals that have periods besides humans is spiny mice.

The spiny mouse has a menstrual cycle that lasts between 6 and 10 days and a period that lasts on average 3 days.

It is a recent discovery that the common spiny mouse (Acomys cahirinus), a small rodent, has a natural menstrual cycle. Scientists now have a new model to examine women’s health in the lab after discovering that the Egyptian spiny mouse menstruates spontaneously.

The fact that menstruation happens in the spiny mouse could change several areas of female reproductive biology. For the first time, scientists have a small animal that menstruates in a way that is similar to humans.

Scientists have found that one species of fruit bat menstruates in a manner strikingly comparable to that of human females. Their results were published in the journal Biology of Reproduction.

When bats are studied in the wild and in zoos, it takes 33 days for them to have their period. Researchers looked at how wild fulvous fruit bats’ menstrual cycle changes the:

There was only one day when the baby’s mother bled (Day 1). On day 18, when luteinizing hormone and follicle-stimulating hormone levels were highest and the endometrium was thickest, a pre-ovulatory follicle was found in the ovary.

Last but not least of which other animals that have periods besides humans are elephant shrews.

Female elephant shrews are one of the only non-primate animals that have a menstrual cycle comparable to that of human females.

Once a couple has mated, they will go back to living separately. The female will give birth to a litter of anywhere from one to three young many times a year, during a pregnancy that lasts between 45 and 60 days. Even though they emerge from the nest very mature, the young stay there for many days.

Do Dogs Have Periods?

Dogs are also mammals that sometimes bleed, but this does not mean they are menstruating. When progesterone is taken out of a dog’s body all at once, the dog bleeds from the vagina instead of the uterus.

During the first 7–10 days of the cycle, the dog will not bleed at all. Bigger dogs tend to bleed more than smaller ones, and most dogs don’t bleed very often.

If the dog gets groomed regularly, you’re less likely to find blood splatters around the house, female dog diapers like these available at Amazon can be used to reduce mess.

Do Cats Have Periods?

Cats, in a way, do go through their own versions of menstruation. Even though it is technically referred to as oestrus in cats, the term “in heat” is more common.

Female cats that aren’t spayed are the only ones that go through this, but instead of shedding their old uterine lining as humans do, they reabsorb it, therefore bleeding is very uncommon.

A heat cycle may last anywhere from 1-21 days but typically lasts for 7 days on average. The cat will stop heat for a few days if she is not mated when in estrus, anywhere from 2-19 days depending on the circumstances.

Do Dolphins Have Periods?

Female dolphins do not have periods. However, female dolphins typically ovulate 2-7 times a year, with gestation lasting around 30 days for each birth.

The estrous cycle averages about 21 days but may last as long as 42 days. Meanwhile, bottlenose dolphin females show little or no symptoms of menopause. Dolphins in Sarasota have been seen reproducing up to 48 years of age.

Mares, unlike human females, do not have monthly menstruation. They do have a menstrual period (or “heat cycle”). It begins in early spring and lasts for 19–22 days. This occurs once every year and never any other time.

There is no menstrual bleeding in a female horse. The “period” of a female horse has many names. Seasons and summer are the common terms used to describe them. The process usually begins in early spring and lasts for 19–22 days.

Do Chickens Have Periods?

Chickens don’t menstruate, and their eggs aren’t “chicken periods” like some people say.

The cycle of making and laying eggs that are much bigger than their body size and weight may be even more physically demanding, especially for modern hens that have been bred to lay eggs at rates that aren’t natural.

Other animals that do have periods besides humans are:

Many mammals do not have periods, including:

Instead, dogs only bleed during “heat,” also known as the estrous cycle, which is caused by the female reproductive hormones. We hope this article helped you understand that not all animals menstruate the way humans do. 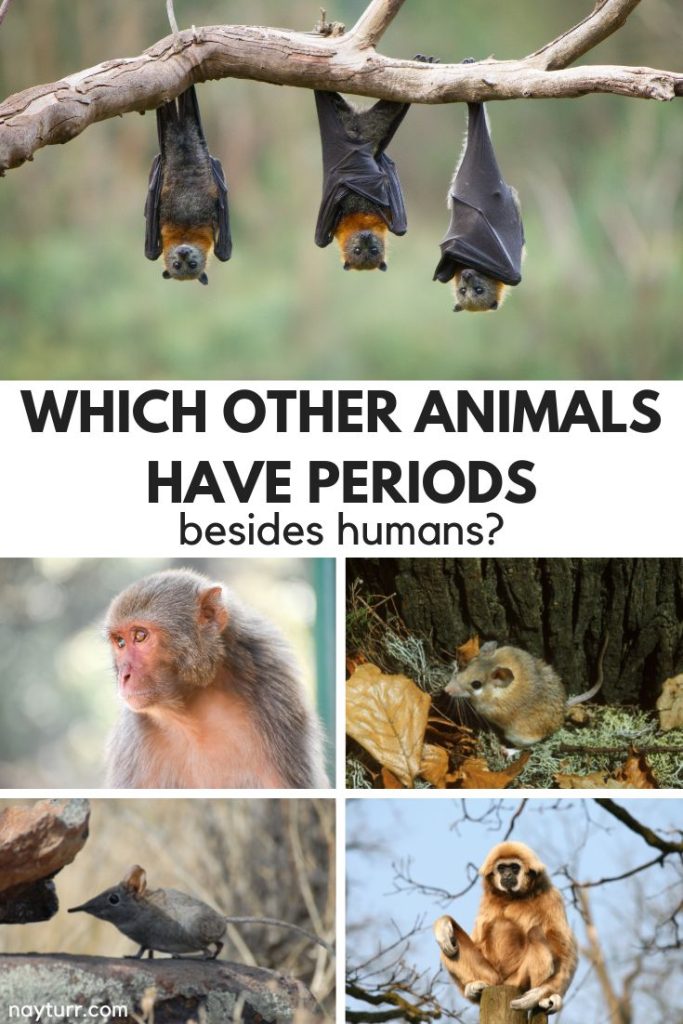