Did you know that there are animals that need less sleep than others? How long animals sleep, where they sleep, and how long they spend in each sleep stage depend on several things.

Animals have changed the way they sleep over time. Animals that attack predators while they sleep are less likely to pass on their genes, so they have learned to protect themselves while they sleep. Among other animals, some that sleep the least are:

What Animals Sleep The Least In The World?

Here’s the list of animals that sleep the least:

Researchers from the University of Zurich spent 152 nights studying how giraffes sleep in great detail. They found that giraffes sleep either standing up or lying down with their faces tucked into their buttocks.

Thus, on average long-necked animals may sleep around 4 hours each day and slightly less in the wild. Even though this may not seem like much, it indicates that a giraffe will sleep for four years throughout its lifetime.

It is believed that these marine mammals don’t get much sleep because of their offspring. During their first month of life, these tiny swimmers have so much vitality that their mother has difficulty keeping up with them.

Also, scientists think that the calves’ ability to stay awake may help them avoid being eaten by predators and keep their body temperature stable until they get enough fat to live in cold water. (Source)

The researchers kept track of whether or not the animals spent more time at the top of the pool than at the bottom. Those actions at the bottom of the pool were considered nighttime sleeping. Adult orcas often sleep for five to eight hours a day.

Researchers also note that certain cetaceans, including dolphins and beluga whales, sleep with just half of their brains active.

Many people mistakenly believe that sharks don’t rest since they must constantly swim. While it’s true that sharks occasionally shut their eyes during the day, this isn’t typical sleep for them.

Most sharks don’t have a strong preference for day or night, and they may easily switch between being nocturnal (active at night) and diurnal (awake during the day). They instead follow their internal clocks when it is time to sleep.

As a result, it’s quite difficult to know how frequently sharks sleep and how much rest they receive.

FUN FACT: Although popular belief said that sharks needed constant activity to stay alive and could only rest for brief periods, the motion of a shark causes oxygenated water to rush through its gills, allowing it to take a breath.

Donkeys sleep for about 3 hours at a time. They are also listed among the animals that need the least sleep.

Also, donkeys are much like any other farm animal; they go to bed at night. However, instead of lying down, they sleep in an upright position.

Although they do lay down to soak up some rays or doze off, these creatures are generally active.

When they go to sleep, donkeys don’t need to lie down like other animals because a unique part of their brain keeps them from falling over.

In the wild, elephants rest for as little as two hours a day, usually at night. Elephants sleep four to six hours a day in zoos. In captivity, these animals lie down for hours and only get up to eat.

Elephants wake up often and sleep for only a few minutes at a time. Studies show that most of their sleep happens between 1:00 AM and 6:00 AM, even though they may take short naps during the day.

These animals spend most of their awake time eating. Elephants take a long time to digest, which may be one reason they don’t sleep for very long.

FUN FACT: Some research has shown that elephants can eat and sleep simultaneously.

Ants are also among the beings that need the least sleep. They don’t need as much sleep as people, they take a “power nap” instead. Researchers have found that ant workers take an average of 250 one-minute naps daily.

Thus, in 24 hours, this amounts to 4 hours of sleep. The lengthy lifespan of the colony’s queens may be attributed to the fact that the workers seldom have a chance to rest.

Sheep may only get approximately 5 hours of sleep altogether each day. Sheep and other ruminants spend so much time eating that they can’t lie down throughout the day.

Thus, sheep typically need less than 8 hours of sleep per day. As grazing animals, they divide their time between foraging for food and resting or ruminating for long stretches of the day.

Horses don’t need nearly as much sleep as people do. They are also one of the animals that require the least sleep.

INTERESTING FACT: Since muscular tone decreases during REM sleep, horses must lie down for at least 30 minutes every 24 hours.

Despite their massive size, walruses don’t need a lot of sleep and may go without shut-eye for up to 84 hours straight. They inflate pouches in their throats to float while sleeping or bite into the ice with their teeth.

Meanwhile, other reports state walruses are like the bats of the sea when it comes to how long they sleep. They sleep between 19.4 and 20.5 hours per day. They can sleep in the water or on land, but on the ground, they sleep longer.

Lastly, ostriches are among the animals that need the least sleep.

To better understand the peculiar sleeping habits of the ostrich, scientists in South Africa captured six of the birds and attached data recorders to their heads as they slept.

They thought the brain waves would look like those of other birds and mammals, which go between two patterns: deep sleep and REM. It has been discovered that ostriches can sleep up to 10 hours a day.

FUN FACT: Ostriches don’t bury their heads in the sand, as popular belief would have you believe. It almost seems they don’t seem to sleep at all!

Which Animal Never Sleeps and Why?

Since jellies lack brains, they are unable to enter a restful sleep. That is why they never seem to get any rest. Also lacking in brains are sea urchins. That means they can’t go to sleep, either.

Likewise, as nocturnal creatures, bullfrogs don’t sleep much during the day. Neither day nor night revealed any signs of inactive conduct.

Meanwhile, in their first month of life, baby dolphins will not rest. They’ll stick close to the dolphin mom and sleep with one eye open.

Until her young are old enough to fend for themselves, the mother will also remain awake. This is likely so that she can keep an eye out for any dangers.

Absolutely! Almost every living creature, including humans, needs time to relax or sleep. Most living things have what is called a “circadian rhythm,” and are controlled by an inherent biological 24-hour clock that governs sleep and wakefulness.

Humans feel best after 7 to 9 hours of sleep. What we consider normal would be overkill for many animals. Many animals sleep relatively little.

A few of the elements that contribute to these variations in sleep patterns and requirements of animals are:

It’s also essential to note that animals’ sleeping habits have developed over time; species whose members are attacked while they sleep have a lower chance of surviving to reproduce. Thus, some animals survive by sleeping less than other animals. 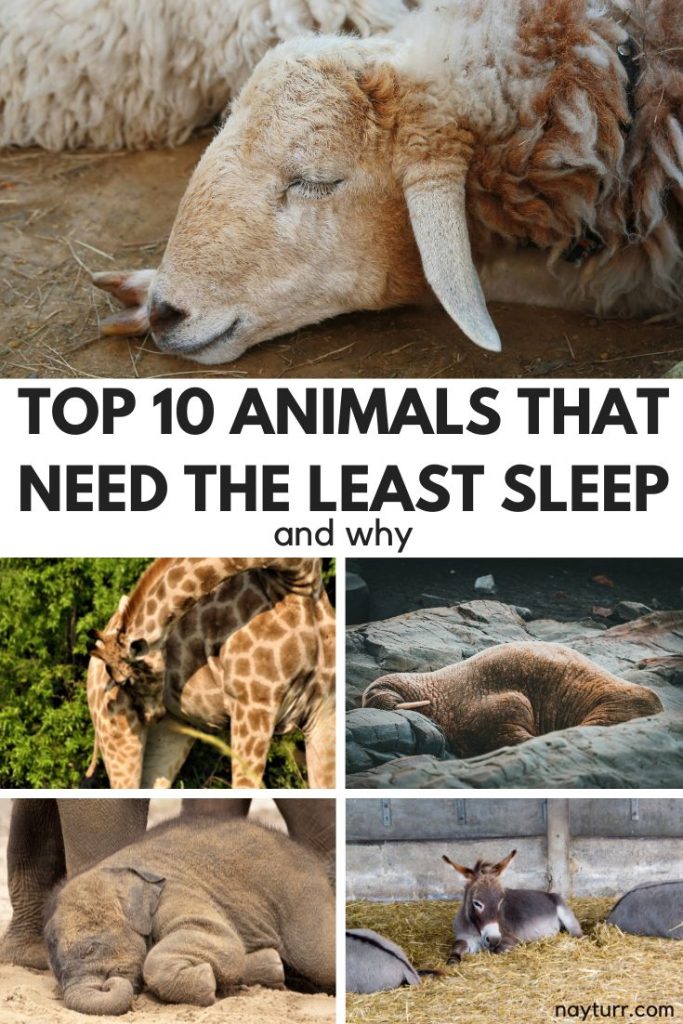