As cat owners, we’re accustomed to seeing them purr and meow as they interact. They know it’s a way to communicate, whether for a meal or letting you know they need attention. A question that often comes to mind is whether or not their bigger relatives do the same. Do wilderness experts and zookeepers ever experience these cats meowing?

Several big cats know how to meow. It’s not something that only domestic cats can do. There have also been records of many others within the cat family using a meow to call out or request food. It’s more common when they’re small; as they mature many lose their ability to meow. Other species will retain the ability throughout their life.

The majority of big cats, however, cannot meow. It is physically impossible for them due to the differences in their throat structure compared to domestic cats.

You’ll notice how small cats don’t often meow at each other but rather do it to communicate with a human. There are records of larger cats meowing because they are usually used to a human interacting with them.

FUN FACT: Tamed large cats living in zoos or preserves may meow. They often see their humans as a part of their pack or someone they respect.

Meows can also vary and may communicate different things. Some of the more common examples include:

People don’t often encounter big cats meowing in the wild because they never learn to communicate with humans using their voices. For domesticated cats, it’s a way to express themselves. Big cats use their voice to intimidate or scare away any threats.

Which Big Cats Can Meow and Which Can’t?

Cats’ ability to meow usually depends on their size. Smaller-sized cats have a throat structure that allows them to communicate mildly (meowing). This can be true for some big cats as well. Here is a list of big cats that can meow:

You’ll notice that these are smaller than the rest of their kin. Leopards and cougars are much larger than house cats but small compared to lions and tigers. You can sometimes hear variations of their meow when they’re together, but they mostly do it when vocalizing to humans. On the other end, here are big cats that cannot meow:

Why Can’t These Cats Meow?

As mentioned earlier, big cats have a different structure to their throats than smaller cats. The change is in the bone structure. They have a bone called the hyoid that connects to the elastic ligament in their throats. Without it, a cat can have more control over its vocalization.

The hyoid serves another purpose, holding the tongue and larynx to keep them still. It’s the reason why roars sound resonant and deep.

Smaller cats also have hyoids, but they are ossified, meaning that it’s rigid. While big cats cannot meow, it does not mean they aren’t talkative. They also love communicating with one another through different sounds.

Some cats have delicate bones that allow them to vibrate their voice box. The purr is often an indication of affection, and some studies state that it’s a way for lions to camouflage their presence against predators.

A purr is a continuous sound that cats can produce while breathing. Like meowing, some cats can purr while others cannot.

A growl is a deep guttural sound that cats emit when they feel a threat is nearby. They often display this in front of other cats and animals. It’s a way to let others know they are claiming possession of something.

Hissing is more of a defensive sound that cats emit. They arch their tongue and let out a short burst of air. It’s the last warning to another animal before they commit an attack. Some cats also use them to establish dominance.

Instead of purring, some cats emit a chuff sound. It’s a low sound in short bursts where they blow out air through their nostrils.

Big cats do this when greeting or exhibiting non-aggression. It means that they are approachable and social. They also do this when they are courting.

Some cats can even imitate sounds. For example, the tiger lures in some of its prey by using its sounds against them. They do this to hunt bears and other large animals. It’s a way to draw a target before going in for an ambush.

Some big cats can meow, but not all of them. Many big cats do not have the bone structure in their throats to support the meowing sound. Instead, they emit other sounds like chuffing or growling.

Not only that, but cats mainly meow as a way to communicate with humans. Since big cats don’t often interact with humans, many do not know how to meow and have not developed the capacity to do it.

Some big cats can meow when they are young but lose that ability as they grow older. The reason for that is that their hyoid bones are different. For big cats, the hyoid helps keep their tongue and larynx still, allowing them to let out deep and resonant roars, intimidating any threats, but not to meow. 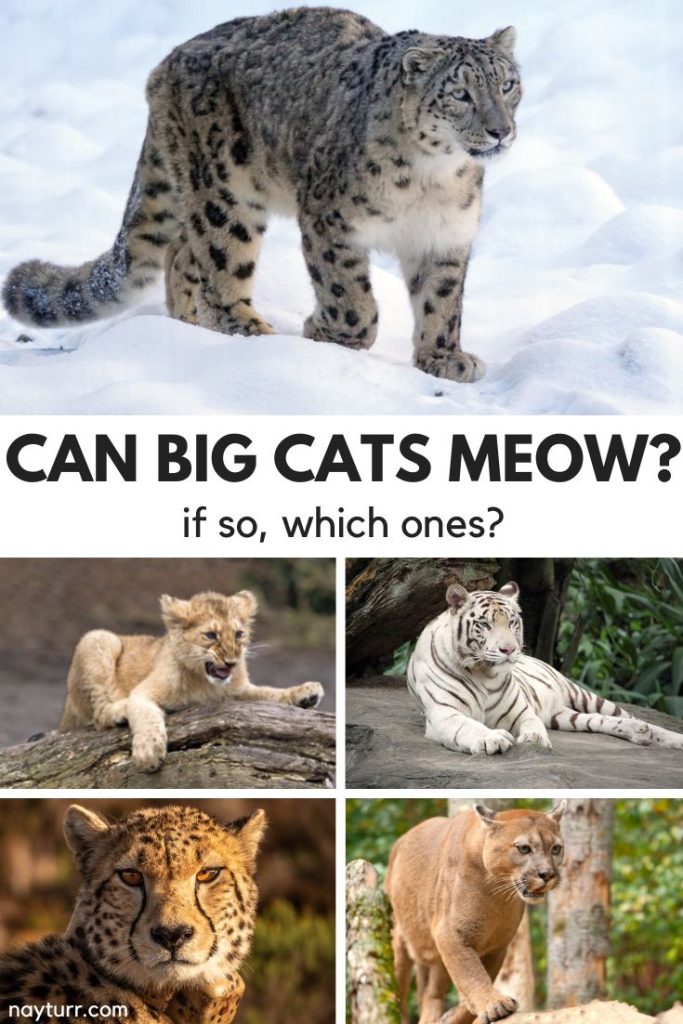