Like humans, lakes go through cycles in their lifetime. Each lake eventually ages and slowly disappears over hundreds or thousands of years. With human influence, however, this may happen in only decades.

Note: Check out our article “22 Different Types of Lakes” for information on the vast differences between lakes.

Nested within the Clearwater Lake Provincial Park and in the beautiful Coteau Hills, Clearwater Lake is located in Manitoba specifically northeast of The Pas. Covering an area of 593 square kilometers, the lake is surrounded by areas of boreal forest that include spruce bog.

Clearwater Lake is a deep, clear, and cold lake renowned for having large lake trout and super water quality. As a circular lake with a diameter of 10 miles (16 km) and an average depth of 43 feet (13.1 m), Clearwater Lake has a maximum depth of 127 feet (39 m). The lake is fed by a spring and it lacks in flowing streams known to carry silt.

It has outflowing streams that empty into the Cormorant Lake and finally into the Saskatchewan River system. Ranked No.10 among the Top 10 Deepest lakes in the world, Clearwater Lake has a depth of 1968 feet.

At No.9 on our list of the 10 Deepest Lakes in the World is Great Slave Lake. Ranked as the 2nd largest lake in the Northwest Territories of Canada, this is the deepest lake in North America at 2,014 feet (614 m).

The largest lake by surface area is Lake Superior. As one of the Great Lakes of North America, it is bordered by Canada to the North and US to the West. The lake has a volume of 2,900 cubic miles(12,000 cubic km) of water and has an average depth of 147 m.

You may be wondering about the name Great Slave. Well, the lake shares its name with Slavey First nations. Slaveys are a First Nations aboriginal people from the Dene group. The group was the first to settle around the lake after the receding of the glacial ice.

The group is indigenous to the lake region which extends from Canada’s Northern territories to the northeastern part of British Columbia and the northwestern region of Alberta.

Several towns are located close to the lake and they include Fort Resolution, Hay River Reserve, Behchoko, Yellowknife, and Dettah among others.

As the world’s second-largest alpine lake, Issyk Kul is over 170 km long and 70 km wide. The name Issyk Kul means “hot lake”, a name that comes from the mild salinity and thermal activity surrounding the lake.

As the 8th deepest lake in the world, it never freezes even when exposed to extreme winter conditions common in Central Asia.

As an endorheic lake, it is located in the northern Tian Shan Mountains found in Eastern Kyrgyzstan. Today, it is the second-largest saline lake in the world and the 10th largest lake by volume and not by surface area. Lake Issyk-Kul is surrounded by snow-capped mountains.

It is estimated that 118 rivers feed the lake with the largest being Tyup and Djyrgalan. The lake is also fed by snowmelt and hot springs. While the lake does not have an outlet, the lake empties its waters via an underground channel that connects to the Chu River.

Learn more about 14 awesome things to do in Issyk Kul.

Formerly known as Lake Nyasa, Lake Malawi was first “discovered” by Dr. Livingstone, a missionary-explorer over 150 years ago. Lake Malawi lies within the Western Rift Valley and its one of the deepest lakes in the world.

The lake is located 1,535 feet (468 m) above sea level. It is a meromictic lake which means that the water layers rarely mix. The lake plays an important role in the fishing villages scattered around it. In addition, it is an attraction to tourists visiting the Lake Malawi National Park.

Lake O’Higgins –San Martin is the deepest lake in North and South America with a maximum depth of 2,743 feet (836 m). Its main tributary is the Mayer River together with other streams and its main outlet is the Pascua River. The outlet discharges its waters into the Pacific Ocean at a rate of 18,000 cubic feet (510 cubic m).

Located near the O’Higgins Glacier, it is one of the most irregularly shaped lakes. It consists of 8 arms.

The average depth of Lake Bunyonyi ranges between 144 feet (44m) and 2,952 feet (900m) at its deepest point. This makes the lake the second deepest in Africa and the 5th deepest in the world.

Lake Bunyonyi is surrounded by hills elevated at a height of 2,200 to 2,478 m high. It has around 29 islands which are mainly concentrated in the central part of the lake. There are a few settlements on the lake but a vast majority of the local community lives on the hills close to the lake shores.

One of the islands on Lake Bunyonyi is called Punishment Island and the story behind it is quite sad and astonishing. According to history, the island was home to teenage girls abandoned by their families to starve since they could not swim across the deep lake back to the shores. Today, that practice is no longer being carried out.

Other notable islands on the lake include Akampene, Bwama, Njuyeera, Kyahugye, Bucuranuka and Bushara among others. There are several activities that tourists can enjoy around the lake. For instance, you can canoe on the lake, hire boats for a boat ride, and even explore the islands.

Lake Bunyonyi is said to be one of the lakes that do not contain bilharzia, a waterborne parasite. As a result, it is one of the safest lakes to swim in.

As one of the most extreme environments in the world, the lake is 230 km (143 miles) long and 50 km (31 miles) wide. Sitting near the South Pole, its presence was first suggested by a Russian pilot and geographer. The pilot and researcher noticed a large smooth patch of ice above the air while flying over the lake.

In 1996, Russian and British researchers who finally discovered the lake carried out radar experiments. The lake gets its water from meltwater which originates from the ice sheet. Over the years, researchers have mapped the shape of the lake using remote sensing techniques. Some of the methods include ice-penetrating radar and seismic sounding.

The lake has two basins separated by a ridge. It has been suggested that the lake hosts a unique ecosystem.

As the world’s largest inland body of water by surface area, it is the third deepest lake in the world with a depth of 3363 feet at the deepest point. Located east of the Caucasus Mountains and west of Central Asia, the lake borders the following countries Kazakhstan, Turkmenistan, Iran, Azerbaijan, and Russia.

What you ought to know is that the Caspian Sea is endorheic. This means that the water body does not have any natural outlets but more than 130 rivers flow into it. Its primary tributary is the Volga River.

Located between four African countries namely Tanzania, Burundi, Zambia, and the Democratic Republic of the Congo, Lake Tanganyika is the second deepest lake in Eastern Africa, in Africa as a continent and the world. As the longest freshwater lake with a total length of 660 km (410 miles), it has a depth of 1,436 m (4,710 ft) at its deepest point.

The lake covers an area that totals 32,900 square km (12,700 square mi) and is located in the southern end of the Western Rift Valley. A vast majority of the lake rises steeply from its shores and its waters are brackish.

The lake is fed by several rivers where the largest of the rivers include Ruzizi, Kalambo, and Malagarasi. Kalambo River has one of the highest waterfalls at 215 m (704 ft). The lake’s outlet is the Lukuga River that flows into the Lualaba River.

The first Europeans to visit the lake were British explorers John Hanning Speke and Sir Richard Burton who reached Ujiji on the eastern shore of the lake. Their quest was to find the source of the River Nile.

Also known as Ozero Baikal in Russian, Lake Baikal is located within the republic of Irkutsk and Buryatia provinces of Russia. As the No.1 deepest lake, Lake Baikal tops our Top 10 Deepest Lakes in the World listicle.

There are more than 330 streams and rivers that flow into Lake Baikal. The largest of rivers include Barguzin, Chikoy, Upper Angara, Uda, and Selenga among others. Lake Baikal is located within a deep structural hollow which is surrounded by several mountains where some of them rise to more than 2,000 m (6,600 feet). 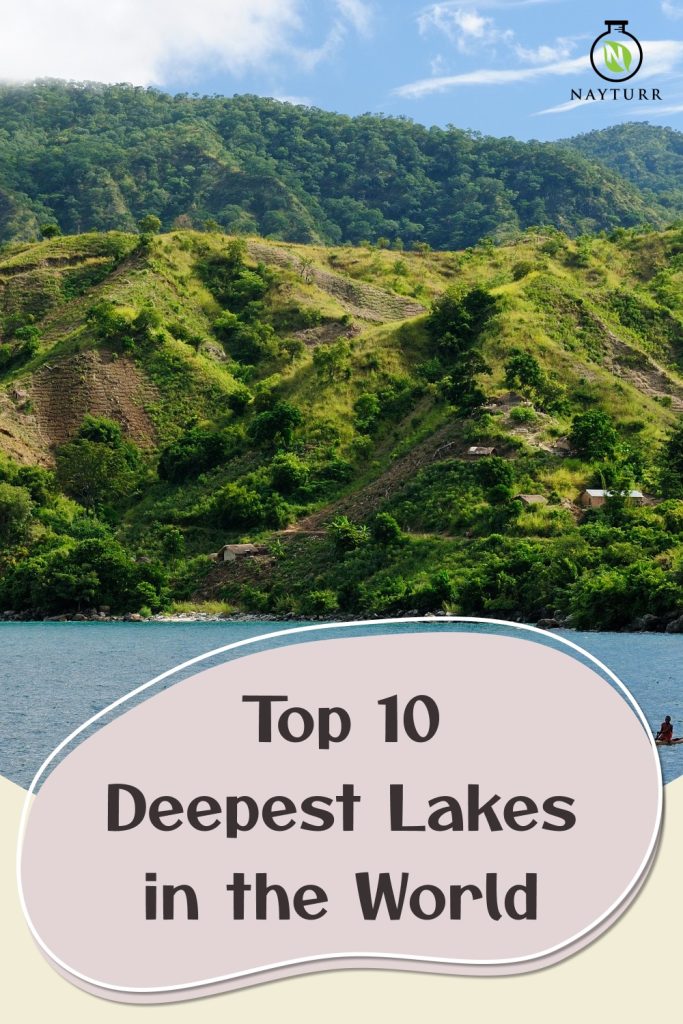