Mustela Putorius Furo is commonly known as a ferret. They are a domesticated version of a mammal called the European Polecat. They belong to the genus of Mustela in the family of Mustelidae, which is the same as that of the weasel.

Experts have estimated that their domestication dates back to around 2,500 years but the exact timeline is still debatable. They have been domesticated to hunt for rabbits in some parts of the world but most of them are kept as pets.

Ferrets are closely related to polecats and even hybridize with them pretty easily. This can result in some damage to the local fauna due to these polecat-ferret hybrids, especially in New Zealand. This is why New Zealand has some sanctions in place against keeping ferrets.

In Latin, their name means ‘thief’ and a group of ferrets is called a business. Ferrets have a long history with humans but there are many different types, which we often don’t consider.

As pets, ferrets don’t have the same needs as other domestic animals. To keep them happy and healthy, we have to accommodate certain things as per their needs.

Ferrets are carnivores that can only survive on a meat-based diet. They thrive on high-quality kitten food but need a constant supply due to their high metabolism. This means that they need access to food all the time.

You can also treat the ferret to small human-grade meat pieces. It is important to have fresh, clean water around. They also like to chew on small objects so you may want to clean up all the small knick-knacks before you get a ferret.

Ferrets are social animals, which is why it is better to have two in the house rather than one. You will have to make sure to get the ferrets de-sexed before you bring them into the house together. This will help with social cohesion and has other health benefits that your vet can tell you about.

Ferrets are most active at dusk and dawn. They also perform a really funny weasel war dance sometimes when they want to play and are happy. Ferrets need to be kept away from small pets like kittens, guinea pigs, and rabbits since they are known to prey on small animals.

Ferrets need to be kept in a secure cage unless they are supervised to keep them safe. They are really curious and active animals that may run around the house and end up chewing on objects which can harm them.

The cage should be as large as possible so they can walk around and stretch fully. It should be well-ventilated. If you want to make it interesting for the ferret, you can add hammocks, tunnels, and boxes for them to run around in.

Ferrets can be trained to use the litter tray as cats do. You can put the litter in a small box in the corner of their cage and change it daily.

Ferrets require preventive healthcare and regular health checks just like any other pet. There are certain vaccines that can prevent worms and fleas. They can even get dental diseases and other chronic diseases that need to be monitored by a vet.  You will need to find a local vet that can look over the animal.

Before you learn about the different types of ferrets, you should know about how people differentiate them. The following characteristics are the most common indicators for distinguishing between ferrets.

Ferrets are often kept as house pets. If you are thinking about bringing one into your house, here’s a list of different types of ferrets that you should consider!

Albino ferrets have pink to red eyes, pink noses, and white coats. Their neat white coats look really attractive and make it easy for the owners to find them even in dark rooms. The albino ferrets get lethargic in the afternoon and are prone to napping.

However, they are especially active and energetic in the mornings. They need to be bathed by owners at least once a month so that they remain fluffy and soft. Many kids and elderly often keep albino ferrets as a therapy pet.

From their small nose to the tip of their tail, Black sable ferrets are deep black in color. The heads of these sable ferrets have hood-like marks that reach till the nose. The undercoat of the animal is creamy or white in shade.

The guard hair doesn’t have any warm tone and is blackish-brown in color. The eyes are small and often dark brown or black. Their nose is an ash blackish-brown color.

Black Sable Mitt ferrets are the same as the black sable ferrets except for one major difference. They are called mitt ferrets because they have four white feet – two-thirds of the leg from the toes. The guard hair is either white or black in color.

Aside from the white color of the mitts, they also have a cute white bib. Their nose and eyes are black or nearly black in color.

Blaze ferrets have different colored coats. The animals have an unbroken white stripe that starts from the small area between their eyes, over the head and goes down to the area at the back of their necks.

They also have four mitts and a white bib like many ferret species. The Blaze ferrets are also characterized by small, colored rings around their eyes, which can sometimes look like they have small masks.

Champagne ferrets are really unique since they have warm, milk-chocolate brown guard hair. They usually have a white undercoat but may also have a slightly golden hue to their underbelly. They have pink, pinkish brown or beige colored eyes.

Chocolate ferrets mostly have the same color as sable ferrets but their tails, legs, and banded masks are dark brown to red in color. Small brown guard hair covers their entire head, body, and neck. The undercoat of the animal has wheat-colored to creamy-colored hair.

Some chocolate-colored ferrets look like they have ruby red eyes but most have black eyes. Their nose has a T outline like many other ferret species and their nose is pink to brown in color.

Chocolate mitt ferrets are identical to chocolate ferrets since they have small brown guard hair, reddish-brown masks, tails, and legs. However there’s one major difference – they have four mitts, which go really well with their coat’s light color.

Cinnamon ferrets have cute reddish-brown guard hair and tails. Their legs are often a darker shade of reddish-brown and their noses are pink. They have a variety of cinnamon shaded masks, which complement the red-brown fur they have.

The eyes of the Cinnamon ferret are dark to light burgundy in color. However, they may also have black eyes.

Cinnamon mitt ferrets look exactly the same as their cinnamon colored counterparts since they have cinnamon shaded masks and red-brown fur across their body. The only difference is that they have four white mitts.

Dalmatian ferrets have completely white fur with different patterns of black spots or blotches across their back. This makes them look like small Dalmatian puppies. They don’t have spots anywhere else on their body though. They have black or dark ruby-colored eyes and a pink nose.

The heavy silver ferrets have a really amazing coat of deep, gunmetal grey and black hair. Their noses are pink, mottled, or black. Their eye masks seem like a small blotch around their eyes instead of proper masks and their mitts are a brilliant white color that goes well with grey.

Panda Ferrets are really cute creatures with white hair on their nose, shoulders, and head. They have a large white bib that covers the entire underside of the ferret’s body.

The only colored part of the body is in the shape of a saddle across their back. They have a white-tipped tail and four mitts. Their noses are pink and eyes can be any color.

Light-patterned ferrets have dark hair scattered all over their bodies but generally, have a white coat. They have a black to pink nose and dark ruby-red eyes.

Sable ferrets have a unique mask on their eyes, which resembles the burglars in cartoons. They are noted for the dark to cream undercoat which is covered with dark guard hair. The color of their body is the same shade, especially the neck, body, and head. They have a pink, black, or mottled nose, and black eyes.

Siamese ferrets are just like chocolate, cinnamon, or sable ferrets but with a darker shade of hair on their legs and feet. They have a unique V-shaped mask which is of a darker color than their tail and extremities.

The underside of their body has a dark line which is the same color as the fur on their tail, feet, and legs.

Stripped White Ferrets have a neat white coat with a really dark line tracing the backbone that runs down their back. Some ferrets of this species have a strip that even reaches all the way to their tail. Their eyes are pink or dark ruby in color while the nose is either pink or black.

These white ferrets have really dark or black eyes. Some ferrets of this species also have some dark hair that traces their backbone. They have a small pink or black nose.

Ferrets have become a beloved part of many households. However, it is important we take good care of these species and protect them.

Check out our articles about hedgehogs, skunks, or kangaroos! 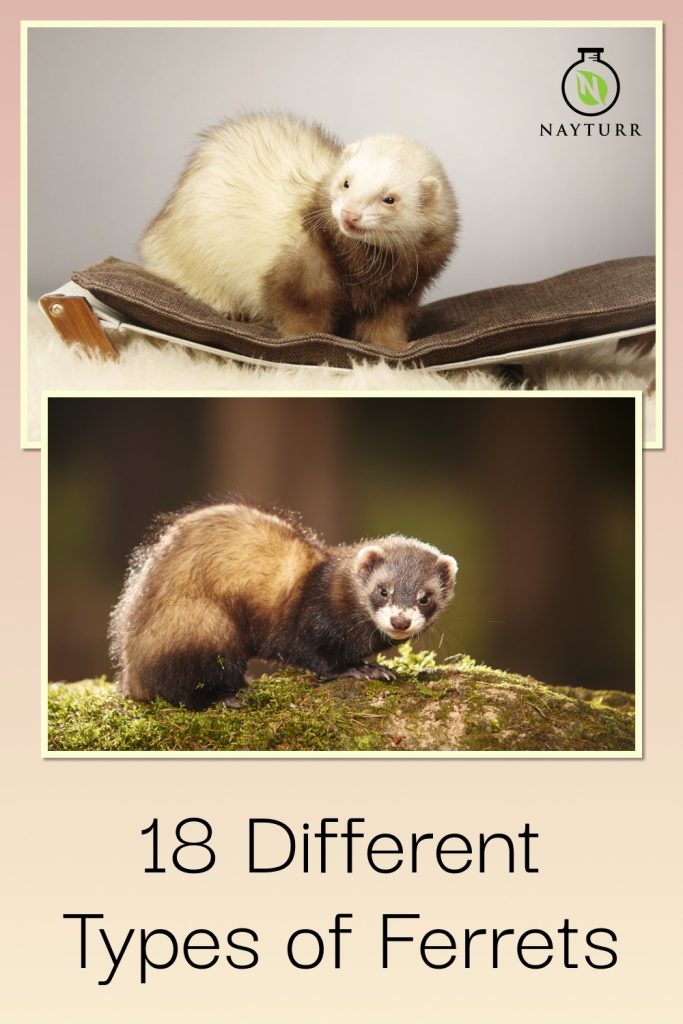