Skunks are mammals that belong to the skunk family known as Mephitidae, which means “stink.” The skunk family is composed of 10 different species found in North and South America and two species of stink badgers in Southeast Asia.

They live in forest edges, woodlands, grasslands, and deserts and can survive up to three years in the wild or up to 10 years in captivity. As omnivorous animals, their diets change according to the season.

Just like its name suggests, hog-nosed skunks have a snout that is bald and very broad, much like a pig. They use their sniffers to find food in the ground, and they eat animals such as beetles, insect larvae, and grubs.

Hog-nosed skunks are found mostly in North America, Central America, and parts of South America. There are also different species of these types of skunks, including the American hog-nosed skunk, which is the largest at up to 10 pounds and a length of more than two feet.

Hog-nosed skunks have very sharp claws, and their upper bodies have a lot of strength, making them very good at digging. Some of these skunks do not have the white bar between the eyes, but they have all-black faces and distinctive noses that make them very easy to identify.

They live in habitats that include canyons, rocky mountain slopes, and anywhere else vegetation and other food supplies are plentiful, such as mesquite and semi-open grasslands, stream beds in desert scrub, and various brushes.

Also called the southern skunk, long-tailed Mexican skunk, or the white-sided skunk, hooded skunks have a cap of long fur on the top of their heads and the back of their necks. These areas can look similar to a furry cape, which is how they get their names.

Originating in the southwestern part of the United States down to Costa Rica, their habitats can include everything from dry lowlands to forests or plateaus, as well as high-elevation areas, forest edges, rocky canyons, arid deserts, and grasslands, among others.

In Mexico, this is the most common type of skunk, and it is there they prefer marshes and grasslands over areas such as scrublands.

Hooded skunks can even have various color patterns. Some are entirely black except for a white hood and some white areas on the tail, while others have a single wide, white dorsal stripe. Their tails are longer and their fur is softer than what is found in the striped skunk.

In addition, hooded skunks are one of the smallest types of skunks, usually weighing in at only around five pounds. Interestingly, their tails are actually longer than their bodies.

In fact, the patterns are so unique that no two striped skunks have the same patterns on their bodies, making them a very unique animal. There are four types of spotted skunks, and they can be found from Canada to Central America. Furthermore, two of those types – the pygmy spotted skunk and the eastern spotted skunk – are vulnerable to extinction.

Although spotted skunks love forests and shrub-covered areas, they are just as happy setting up dens around farms, homes, and many other areas.

Although they are stinky, they do give plenty of warning when they are about to squirt out their venom, including stomping their feet and rising up to walk on their front feet, which should leave you with enough time to get out of the way.

Skunks are also very good climbers and can, therefore, walk along branches, and they get up to around two feet in length. Their diets are versatile as well, as they eat everything from fruits and easy foods to prey such as snakes and others.

Despite their name, these animals are not badgers, but fall in the skunk family. They do not have a long bushy tail as other skunks do, but their stocky shapes and stumpy tails make them look a lot like badgers. There are two separate species of stink badgers – the Palawan stink badger, also known as a pantot; and the Sunda stink badger also called a teledu.

They feed on worms, invertebrates, eggs, and other goodies, and they come out at night to eat. They are found in the western islands of the Malay Archipelago, and their stripes can be divided, narrow, or single, and some stink badgers actually have no stripes at all.

Like other skunks, the stink badger releases a foul-smelling secretion when they feel they are threatened, although, for the Sunda stink badger, they choose to play dead first. In fact, for these stink badgers, their secretions can only be sprayed about six inches.

This is in contrast to the Palawan stink badger, which can spray up to 3.5 feet and has an odor that is much worse than the Sunda variety. The stink badgers are not animals you want to aggravate, that’s for sure.

Striped skunks are the most common of all skunks. They can live in both the city and the wilderness, and they are found throughout North America from central Mexico into Canada. The secretion it spews is an oily liquid that most skunks can shoot up to 10 feet.

It can temporarily blind a person who gets too close, and it causes vomiting as well. In fact, the odor is so powerful it is extremely difficult to get out of clothing and other items, and the smell can last for days.

Despite the fact that so many people are afraid of skunks, they can actually benefit society. Their omnivorous diet means that they can keep away beetles, grasshoppers, wasps, and crickets. They also eat fruits and berries and even clean up fallen fruit on the ground.

Striped skunks usually have two distinct stripes on their backs, and as with many other skunks, the striped skunk is nocturnal. This means that they sleep during the day and hunt for food at night. Instead of digging its own burrows, it usually looks for existing burrows or even a natural hollow under a building or a tree.

Check out our article “17 Different Type of Hedgehog” 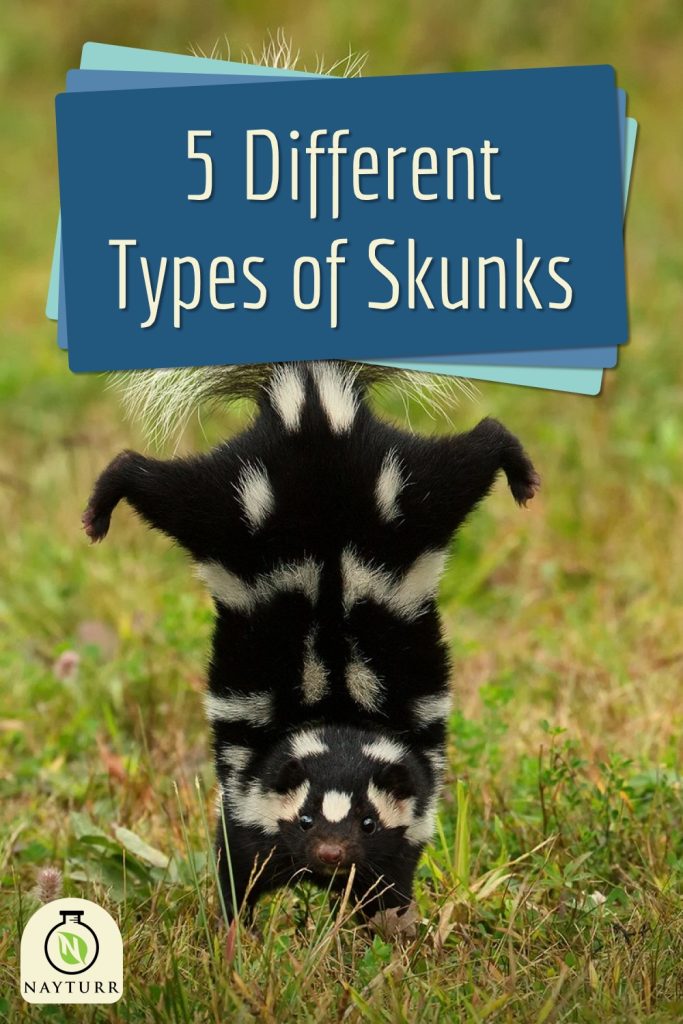