As we slowly start to see some of the more devastating effects of global warming, the melting of ice in the Arctic has become a matter of grave concern. But you may be struggling to understand some of the finer details of melting ice, such as the difference between icebergs and ice floe.

An iceberg is a large mass of freshwater ice that has broken off of a glacier or an ice shelf. An ice floe is a large, flat pack of floating ice. The difference between the two is that most of the ice floe’s mass is above the water’s surface, while about 90% of an iceberg’s mass is underwater.

While understanding how ice forms may seem like a somewhat trivial exercise, it is becoming increasingly critical for global citizens to understand precisely how various natural phenomena cause ice to melt in multiple ways.

Creating awareness is the first step towards finding a solution to the melting of ice in the arctic. So let’s look at how icebergs and ice floe are formed and what distinguishes one from the other.

The Formation of Icebergs & Ice Floe

Icebergs are formed through the calving of glaciers and ice sheets facing the open sea. Calving is the breaking off of chunks of ice from the edge of a glacier or sheet.

This sudden release and breaking away from the larger body of ice can leave behind enormous fragments, with icebergs sometimes reaching a height of more than 100m (300ft) above the sea surface and weighing as much as 10 million tonnes.

The largest iceberg ever recorded, Iceberg B-15, was larger than the island of Jamaica and had a surface area of approximately 11,000 square kilometers (4,200 square miles).

On the other hand, Ice floe is merely an accumulation of floating ice found in Arctic regions. However, they do not originate from land and form in open water.

Where waters are calmer, ice floe forms from frozen seawater, crystallizing into “frazil freezes” that form sheets and grow below water. They will form pancake-like masses of ice that stack together to form fully-fledged ice floes that drift through the ocean in more tumultuous seas.

NOTE: Icebergs are formed on land and enter the water through calving. Ice floes are formed in the ocean and carry far less mass, most of which accumulates above the eater’s surface.

To put the magnitude of some of these frosty behemoths into context, it may be helpful to look at some of the largest icebergs and ice floes that have been discovered throughout history.

However, icebergs tend to get all of the attention, and there are countless stories of colossal icebergs being found in our oceans. Here’s a look at the ten largest icebergs ever recorded:

Iceberg B-15, which broke off of the Ross Ice Shelf In Antarctica in 2000, has already been mentioned a surface area of approximately 11,000 square kilometers (4,200 square miles) but has been broken apart and disintegrated after disintegrating floating across the Antarctic ocean.

Iceberg A-38, which was calved from the Filchner-Ronne Ice Shelf in Antarctica in 1998, had a surface area of approximately 6,900 square kilometers (2,664 square miles). It has since split into two parts and was later broken down into several smaller icebergs.

Iceberg B-15A, which broke off of Iceberg B-15, recorded a surface area of 6,400 square kilometers (2471 square miles) after breaking off in 2002. It was broken apart when colliding with the Drygalski Ice Tongue broke apart and disintegrated in the open sea.

Iceberg A-38, which was calved from the Larsen C Ice Shelf in Antarctica in 2017, covers a surface area of approximately 5,800 square kilometers (2,239 square miles) and is still drifting through the ocean.

Iceberg C-19 also broke away from the Ross Ice Shelf in 2002 and had a surface area of approximately 5,500 square kilometers (2,123 square miles) but has since disintegrated in the open ocean.

Iceberg B-31 broke off the Pine Island Glacier in Antarctica in 2013 and covered a surface area of 660 square kilometers (254 square miles).

With a surface area of 310 square kilometers (119 square miles), Iceberg D-16 broke off from the Fimbul Ice Shelf in Antarctica in 2006.

Iceberg Petermann Ice Island broke off of the Petermann Glacier in Greenland in 2010 and covered a surface area of 260 square kilometers (100 square miles).

Finally, Iceberg B-44 also broke off of the Pine Island Glacier and covered a surface area of 256 square kilometers (98 square miles).

In fact, ice presents itself in many ways inland, on coastlines, and over the ocean. Understanding the nature of icebergs and ice floes, it helps to take the formation and size of ice caps, ice sheets, and ice shelves into consideration.

Ice caps are masses of ice that can form around the edges of a series of glaciers, typically centered at its highest point (massif). They are commonly found at the top of mountains.

Ice sheets (or continental glaciers), on the other hand, are large masses of glacier ice covering the land that surrounds it with a width greater than 50,000km (20,000 miles).

They are typically warmer at their base than on the surface due to geothermal heat in some Arctic regions. When melting, water will lubricate the ice sheet, which flows faster and creates what is known as ice streams.

Ice shelves are thick, floating slabs of ice formed from glaciers and ice flowing down a coastline. They are only found in Canada, Greenland, Russia, and Antarctica and have a thickness of anywhere between 100 and 1,000 meters (328-3280 feet).

They are formed by the forces of gravity where ice meets the shoreline, accumulating into massive bodies of tightly packed ice that resembles a flat landmass.

NOTE: To know more about glaciers, you can check out this article I wrote about the different types of glaciers as well as other interesting facts about them.

How Much Sea Levels Can Rise From Melting Ice

As the planet’s average temperature continues to rise, more and more of these massive bodies and ice formations are melting at an accelerated rate.

And while melting is simply part of the water cycle, an earth with a stable climate doesn’t have to compensate much for the water displacement caused by the melting and refreezing of ice at the change of every season.

Given the sheer magnitude of some ice caps, ice sheets, icebergs, ice shelves, and, to a lesser extent, ice floes, the additional water entering our ocean can potentially displace water and flood the most populous regions on every continent on earth – the coastlines.

A 10 feet rise in sea levels would leave New York, New Orleans, Miami, Virginia Beach, and Fort Lauderdale underwater, along with the majority of coastal cities around the world.

The U.S. Geological Survey estimates that sea levels will increase by roughly 70 meters (230ft) if every glacier and ice cap on earth were to melt. Still, they do admit that there’s a lot of uncertainty surrounding the issue.

What Could Happen If Sea Levels Rise??

Rising sea levels will have a long, long list of associated environmental catastrophes.

For example, rising sea levels could change the direction of essential ocean currents, such as the gulf stream, which would be devastating for marine ecosystems and affect migration patterns. This may lead to an increasing prevalence of tropical storms and hurricanes.

This doesn’t even take into consideration the animal species under threat. The survival of countless marine species is imperative for maintaining a balanced global ecosystem, and each species to fall creates a domino effect that would leave numerous more under threat.

Furthermore, access to clean drinking water may be limited in the future due to the contamination of freshwater sources that would be affected by rising sea levels.

Frequent flooding will also be highly detrimental to many countries’ tourism industries, with beachfront properties and businesses in island nations like the Maldives set to disappear.

There’s no question that climate change is an existential threat for humanity, and we are losing the race to overcome it.

Here’s a look at some of the significant events that have occurred in recent history:

Currently, ice shelves are losing the most mass out of any ice formations we’ve discussed and are the gravest concern merely because of how much we’re losing.

Over the last several decades, meting, calving, and, in some instances, complete disintegration has been a consistent trend for ice shelves worldwide.

The Ellesmere Ice Shelf, a 9,100 square kilometer (3,500 square miles) monolith that has formed on the north coast of Ellesmere Island in Nunavut, Canada, was reduced by 90% in the 20th Century and has now splintered and created smaller ice shelves, the separate Alfred Ernest, Ayles, Milne, Ward Hunt, and Markham Ice Shelves.

In 1986, a survey found that more than 48 square kilometers (18.5 square miles) of ice had melted off of the Milne and Ayles Ice Shelves between 1959 and 1974 before the Ayles Ice Shelve was lost in its entirety to calving in 2005.

Major breakups in 2002, 2008, and 2010 led to a near disintegration of the Ward Ice Shelf. The last remnant of it, the Mine Ice Shaft, experienced a devastating breakup in 2020, meaning the original ice shelf is all but completely gone.

However, the most significant ice melting catastrophe is the fragmentation of the Larsen Ice Shelf in the Antarctic in the North part of the Wendell Sea.

The breakup of the Larsen Ice Shelf was widely reported from the mid-1990s, starting with the disintegration of Larsen A through iceberg calving and disintegration – this is often cited as the first definitive proof that climate change was occurring.

However, Larsen B – a far larger fragment of the Larsen Ice Shelf – and its partial collapse in 2002 was what captured the world’s attention. A surface area of about 3,250 square kilometers (1,250 square miles) of 220m (720ft) thick ice broke off from the shelf. It was roughly the size of Rhode Island.

Larsen B has been at the center of attention in almost all discussions surrounding global warming and climate change for nearly two decades and came to be known as a “hotspot for global warming”.

However, the genuine concern is Larsen C, which covers an even larger surface area (44,200 square kilometers or 17,000 square miles). Reports from the late 90s and early 2000s show that the region was still relatively stable at the time of the collapse of Larsen B.

Still, it is steadily becoming a cause for concern, particularly after an iceberg the size of Delaware was calved from it in 2017. A massive 15km (9.3 miles) crack in the Larsen C Ice Shelf was also discovered in 2017 but did not displace any water. It could, however, accelerate the melting process, and if Larsen C is lost, global sea levels will rise by an estimated 10cm (4in).

Icebergs and Ice floes are two distinctly separate entities that form through different mechanisms and have a prominent role in the potential rising sea levels caused by carbon emissions and the warming of our atmosphere.

However, ice sheets, ice shelves, and ice caps have far larger surface areas, and if they melt, the consequences will be far more devastating.

So if you’re looking to truly understand what the effects of climate change are and if you want to figure out the difference between icebergs, ice floes, and other ice formations, upon which the future of our planet rests, you now have a thorough understanding of how ice forms into these distinct entities, how they change, how they melt and how it can change our world.

The science is complicated, and the consequences can be dire, but the more we know, the closer we can come to finding a solution to this global catastrophe. 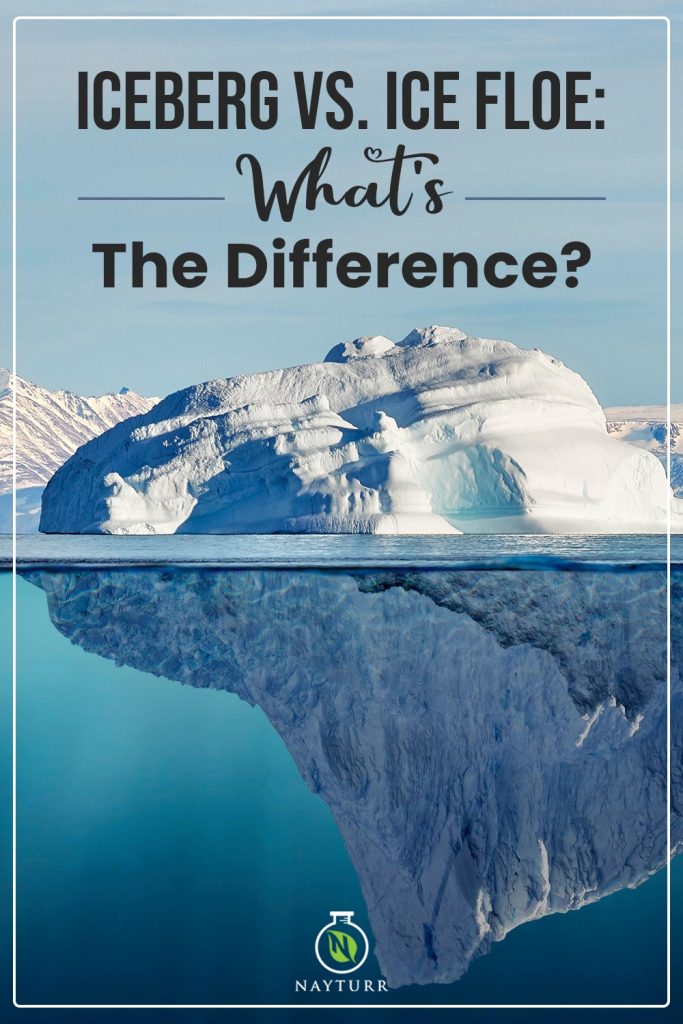