Most people think of a large mass of snow moving down a mountain when they hear the word “glacier.” The kind that you see in thriller films – an irregularly shaped, cloud-like bulky structure of snow rolling downhill while the actor who happens to be in its path tries skiing away hurriedly to avoid being crushed under it.

But glaciers are a lot more enthralling than that. As much as they elicit awe, glaciers make one curious about what these dense snow formations really are.

Glaciers have long been the point of interest for scientists and geologists. A lot of in-depth research has been done on glacial landforms that include studies on how they are formed, the way in which they affect the surrounding areas and the world’s oceans at large.

Just like rivers carve out valleys and alter the nearby landscape, glaciers also sculpt mountains, form crevasses and shape the landscape as they flow. Some glaciers are only found on mountains whereas others end in the sea when chunks of glacier ice break off in a process called calving and float atop the water surface.

Glaciers are an important indicator of climate change or to be more specific, global warming. Various glaciers around the world also attract tourists and inspire adrenaline-driven adventure seekers to come and observe these gigantic wonders from up-close.

Read on to learn more about these magnificent ice masses. The article discusses the different types of glaciers plus some interesting facts about glaciers that will blow your mind (or rather freeze it).

What Is a Glacier?

Before moving on to the different types of glaciers, it’s essential to understand what a glacier really is. An excessively large amount of snow accumulated on a mountain or any other piece of land is not necessarily a glacier.

A glacier is defined as a slowly moving mass of ice formed on mountains or near the poles. It is made up of thousands of tons of snow fallen over many years.

When a large amount of fallen snow remains in one location for a significantly long period of time, it becomes compressed and compacted under its own weight. This leads to the creation of huge, thickened masses of ice known as glaciers. Glaciers are also called ‘rivers of ice’ because despite being solid ice, they are in constant motion.

How Are Glaciers Formed?

The primary requirement for the formation of glacial ice is the accumulation of a considerably large amount of snow. If more snow falls during the winter season than the amount that melts away in summer, snow starts to accumulate.

Within two years, the soft and once delicate snowflakes turn into hard crystalline or granular snow called firn. As more and more snow gets layered on top with the passage of time, the pressure melts the grains just a tiny bit. However, they quickly recrystallize and this forms what is known as glacier ice.

The natural phenomenon of glacier formation can take several decades or even hundreds of years to complete.

Click here to read our article about other natural phenomena that can be seen around the world!

In the broader sense, glaciers can be generally classified into two main groups: unconstrained glaciers and constrained glaciers. Since glacier morphology is affected by the temperature, precipitation and the natural landscape where they form, they can vary greatly in size and shape.

The term glacier can include massive continental ice sheets, small cirques located on mountain tops and anything in between.

As the name suggests, these types of glaciers are rather freely forming ice masses that are not affected by the surrounding landscape. The natural topography or the underlying bedrock does not hinder the accumulation and movement of snow for the formation of these glaciers.

Unconstrained glaciers include ice sheets and ice caps as well as ice streams and ice domes.

Types of constrained glaciers include valley glaciers, cirque glaciers, and piedmont glaciers to name a few.

Continental glaciers, also known as ice caps or continental ice sheets, are the largest glaciers on the planet. About 99% of the glacial ice on earth is contained within ice sheets. The Antarctic ice sheet and Greenland ice caps alone cover more than 50,000 square kilometers.

These glaciers are not bounded by mountains or similar landform. Thus, they tend to spread out in all directions and cover everything in their path. When ice sheets fan out from the center, entire valleys, plains, and even mountains ranges get perched in snow.

At times, as more and more ice gathers, ice sheets can extend over the sea as well. They tend to float in the sea and are known as ice shelves. You might have heard about these glaciers or seen them on TV as more and more news circulates about the alarmingly rapid rate at which they are melting.

What makes continental perhaps the most important type of glacier is the fact that this glacial ice not just serves as a reserve of fresh water but it feeds most of the other glacier types. For example, the Harding Icefield feeds about 40 different glaciers in Alaska.

As is evident by the name, these glaciers are formed in the mountainous regions. Depending on the geographical location, shape and similar factors, different glaciers can be classified as a mountain glacier.

However, the size of the ice mass is one thing that is generally not considered when defining a mountain glacier. A mountain glacier might span over a single mountain, stretch out over several peaks or even extend over the entire mountain range.

The distinct feature of mountain glaciers is the fact that these glaciers are surrounded by mountainous terrain on all sides. The may be found on the sides of the mountain but they end on the slope only which means that they don’t flow into the main river.

If a mountain glacier increases in size and approaches or ends in a valley, then the whole ice mass is referred to as a valley glacier. The largest mountain glaciers in the world are located in Alaska and Arctic Canada. Other regions include the Himalayas in Asia and the Andes in South America.

Valley glaciers are flowing ice streams confined within steep valley walls. These types of glaciers are often easy to identify due to their long and narrow, ribbon-like appearance.

Valley glaciers can form when an outlet glacier slides away from an icefield. However, most valley glaciers typically originate from mountain glaciers and stretch out towards gorges, basins and of course, valleys.

Beginning high up on the mountain top, a valley glacier flows down in the V-shaped area formed between two adjacent mountain peaks. They might follow a path carved out by earlier rivers or create one on their own. If you ever see a U-shaped valley, chances are that a valley glacier carved out that landform. The Yosemite Valley is a result of this glaciation.

Valley glaciers can be several miles long and hundreds, if not thousands of feet deep. Given their gigantic size, they easily flow past the snow line which means that a valley glacier can extend into areas that don’t even receive any snowfall. It is not uncommon for these masses of ice to continue moving downslope until they reach the sea level.

Alpine glaciers are a type of mountain glaciers and as such, these ice masses are found on mountainsides. They slowly move downwards, paving their way through valleys.

More often than not, alpine glaciers form crevasses and will also carve out valleys as they move or deepen the ones already existing in their path. They push dirt, soil, rocks, and other materials out of their path which ultimately modifies the landscape around alpine glaciers.

This type of glaciers refers to ice channels that originate from ice caps, ice sheets or ice fields. Outlet glaciers can further include different types of glaciers such as valley glaciers and piedmont glaciers.

Similar to the case with valley glaciers, outlet glaciers also flow in a direction determined by the underlying landscape.

Given the rise in global temperatures due to global warming, it is believed that a significant proportion of the rise in sea level is due to the melting of outlet glaciers in Greenland.

These types of glaciers are a subtype of valley glaciers found in areas where a relatively narrow mountain valley spreads out into a wide open plain or a deeper and larger valley. Piedmont glaciers refer to a mass of ice that has flowed downslope towards low-lying plains. It fans out in the area and creates broad lobes of solid ice.

The largest piedmont glacier in the world is located in southeastern Alaska. Named the Malaspina Glacier, this humongous ice formation extends about 45 km in length and over 60 km in width, covering an area of approximately 3,900 square kilometers.

The image shown below was captured by NASA and gives a bird’s eye view of the somewhat dizzying but truly mesmerizing pattern of curves and zigzags on the Malaspina moraines.

Tidewater glacier is a river of ice that forms when a glacier flows to the coast. The edge of tidewater glaciers that leads the glacial flow slightly lifts upwards and floats in the ocean. This creates towering ice cliffs that can rise as high as 200 feet in the air.

Tidewater glaciers are notorious for a violent phenomenon known as calving. Calving occurs when bits and pieces of ice break away from the sides of a tidewater glacier and collapse into the surrounding waters with a loud crashing sound. This creates strong waves.

In case you haven’t figured it out already, icebergs are a result of calving.

Cirque glaciers are perhaps the smallest types of glaciers. They are found in the bowl-shaped hollows called cirques, hence, the name cirque glaciers. Cirques are formed in mountain ranges where the fallen snow settles quite quickly into the surrounding topography.

The Lower Curtis Glacier and the Eel Glacier are some examples of cirque glaciers found in the US.

All glaciers have a significant amount of rock and other debris that gather when ice flows over the bedrock. However, rock glaciers, as the name suggests, are unlike any other type of glacier. With the mass of ice predominantly hidden beneath rock debris, you might not initially think a rock glacier is a glacier at all. It looks more like a muddy landslide instead.

Rock glaciers are probably the most slow-moving glaciers amongst all other varieties discusses so far.

These glaciers form in hanging valleys. They originate high up in the mountains and flow down its sides but the defining characteristic of hanging glaciers is that they end abruptly.

They will stop near a cliff or any other similar place and will ‘hang’ from the edge. Their structure is such that at some point or another, they are likely to break off from the mountainside or the corner by which they were hanging. The pieces break away fall and roll down the slopes, resulting in avalanches.

If you have ever seen a thrilling scene in adventure movies where a snowboarder tries to outpace a mass of snow chasing him at his heels, then you have seen the dangerous side of hanging glaciers and the risk that they pose.

The Eiger Glacier in Switzerland is an example of hanging glaciers.

In addition to glaciers, there are many other types of terrain. Click here to learn about them! 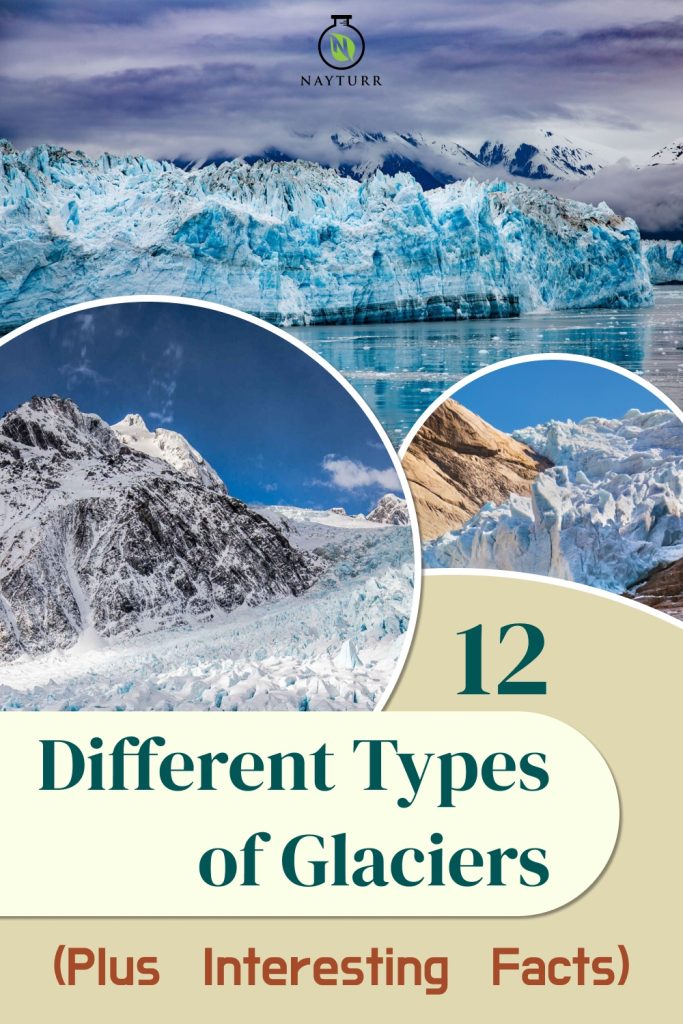