It’s reasonably straightforward to cycle a fish tank without fish in it by adding ammonia. However, it’s important to do each of the steps in order one by one, and there are a few more important details to be aware of.

Below, I’ll explain how long the whole process takes, and exactly how to do it.

First, here’s exactly what happens when cycling a fish tank, and what we’re trying to achieve.

What is Cycling a Fish Tank, and Why is it Done?

So here are some key facts:

Here’s a rundown of each of the steps involved in cycling a fish tank without fish in it, by adding ammonia manually.

#1: Get Everything You Will Need to Cycle Your Tank

There are a few things that you will need ahead of time. Some of these items can require a bit of time to get, so it’s best to have them ready to go before you start the process.

The items you will need are:

Beneficial bacteria grow faster if the water temperature is warmer. If you are setting up a tropical fish tank, then you will already be getting heaters. However, if not it’s optional to get them, as it’s unclear how much faster it is.

You will need a few aquarium water testing kits. One for when you add the ammonia to the water, and others to test it along the way. Typically to cycle a tank without fish in it, using ammonia takes 2 to 4 weeks.

NOTE: It’s not quicker to cycle a fish tank with fish in it. This only makes it slightly easier because you don’t need to add ammonia yourself.

This step is very straightforward. According to experienced fish keepers, ordinary tap water is perfectly fine. Also, put any substrate you want to have in the tank.

It’s common to add ornaments that provide places for fish and animals to hide, and also look great. If desired, add:

An Important Note About Getting Live Bacteria to Add

It’s common practice for experienced fish keepers to keep additional sponges in their water filter. Sponges have a lot of surface area and are good places for bacteria to grow. They can also easily be added to a new tank to help get it established.

It’s a good idea to join a local fish keepers club/group. Experienced fish keepers will typically have some extra sponges to spare. They won’t mind you borrowing them, or can sell you some at a very low price.

Another option is to use a few items from an established tank in a new tank. Such as a piece of driftwood, or a few ornaments.

#3: Add a Few Drops of Ammonia or a Similar Specially Made Product

There are a few products on the market that contain ammonia. There is no real difference between these and adding regular 100% ammonia that can be bought here (Amazon link), or in a local store.

The one good thing about the specially made products is they provide measurements for how many drops to add to the water.

The amount of ammonia you are going for is 4 to 8 ppm (parts per million). Below is a table that shows how many drops of pure ammonia to add based on how much water is in the tank.

The recommended amount of ammonia in the table above is to bring a tank with 0 ppm of ammonia (fresh tap water), to 6 ppm of ammonia. The estimates above are on the low side.

#4: Test the Water to Make Sure It Has the Right Amount of Ammonia

Now that you’ve added the right amount of ammonia, it’s important to test it to ensure you’ve got the levels right. Most water testing kits will tell you how much ammonia is in the water in parts per million. The amount you want to have in the water is 4 to 8 ppm.

This will provide sufficient ammonia for the bacteria to feed on. Typically a water testing kit uses colors to indicate what the level of ammonia is in ppm, by taking a small vial of water and adding a few drops of the testing solution to it.

After that, let it sit for about 5 minutes, and the water in the vial changes color. Then match the color to the color code sheet provided with the testing kit and it will tell you how many ppm of ammonia is in the water. *Refer to the instructions that come with the water testing kit.

#5: Add Beneficial Bacteria (There Are Two Ways to Do It)

This can be both items from an established fish tank and/or a live bacteria liquid. Live aquarium bacteria can be bought online or from pet stores. The one that is commonly recommended and that has been found to work the best is Fritzyme 7 Freshwater Live Bacteria found here on Amazon.

Some bacteria products are reported not to work because the bacteria are not alive and don’t grow when you add them to the tank. Always use a liquid bacteria that has live bacteria in it. Fritzyme 7 product is recommended by several fish keepers, has live bacteria, and is a good value.

#6: Retest the Water to Make Sure the Ammonia Levels Are Low

This step is very simple, it takes about 2 weeks for the beneficial bacteria to grow to levels high enough to consume all of the ammonia. Therefore, you should wait a week or more and then retest the water.

After that, retest every week or so to see when the ammonia levels are low enough. Many sources state that you should aim for 0.0 ppm of ammonia in a fish tank.

But, it’s important to point out that fish constantly produce ammonia, and ammonia is required for the bacteria in a tank to stay alive and continue to grow. Realistically in an established tank, the ammonia levels will fluctuate between 1 ppm and 0 ppm.

Using this method of cycling a tank using added ammonia, you can tell when all the ammonia is gone by retesting the water. Ideally, the amount of ammonia in a tank will be below 1 ppm.

Then you can safely add fish. It’s a good idea to add a few fish every few days, rather than adding all of them at once.

Otherwise, they can add too much ammonia for the bacteria to consume and will make the water too acidic.

The more ammonia in the tank the more acidic the water will be.

Every kind of fish and animal you will keep in an aquarium has an ideal pH range where they will feel comfortable. The main concern with ammonia is if it’s present, is that the water will also be more acidic.

How Long Does It Take To Cycle a Tank With Ammonia?

Cycling a fish tank with ammonia is a great way to make sure your fish don’t suffer any ill effects from the ammonia levels being too high.

But, cycling a fish tank can take a considerable amount of time, and it’s good to know what to expect. So, this is how long it takes to cycle a tank with ammonia.

On average, it takes 2 to 4 weeks to cycle a tank using ammonia. It takes slightly less time to cycle a tank with ammonia instead of with the fish in the tank because there aren’t any fish constantly adding ammonia to the water. The limiting factor is how fast the beneficial bacteria grow.

How To Know a Tank Is Cycled

Cycling a tank involves growing beneficial bacteria in the tank in large numbers. Enough so that they consume the ammonia that is produced by fish, and maintain the ammonia levels to keep them low. But, here’s how you can tell if a tank has been cycled.

Cycled means that the bacteria levels are high enough to consume a lot of ammonia. So much so that the ammonia levels remain consistently low. As you may know, the body of a fish and its poop give off ammonia.

If there is excess fish food it will also add ammonia to the tank. Bacteria numbers will stay high on their own, and grow by themselves. In the beginning, their numbers will be low. It takes a bit of time before there are enough bacteria to keep up with the ammonia being produced by the fish and animals. 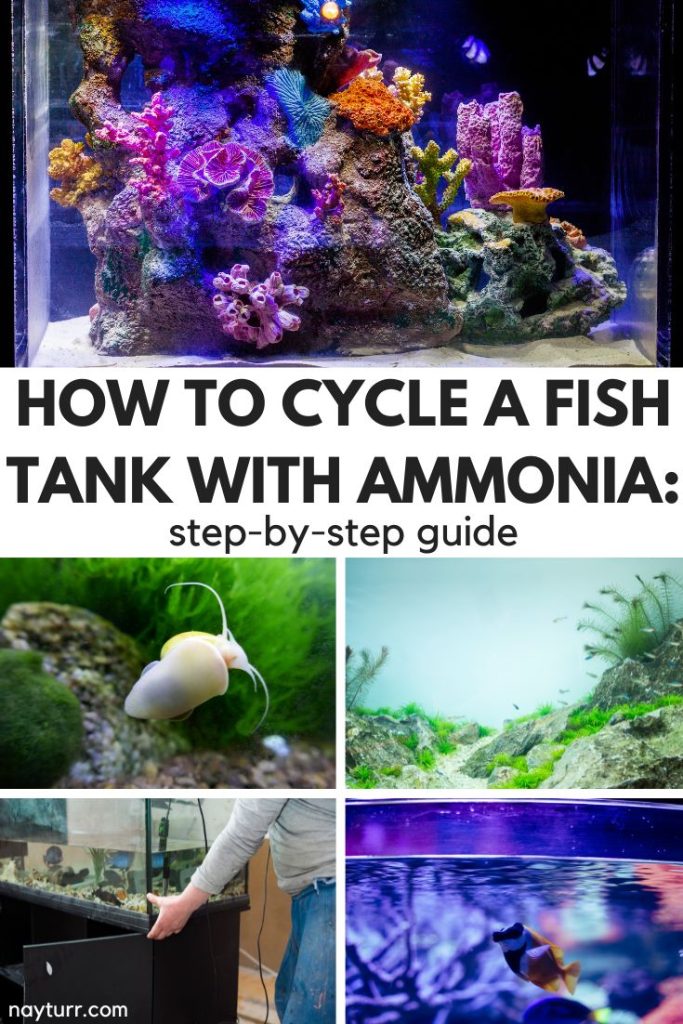