Cycling an aquarium needs to be done before the water will be safe for fish and other animals in an aquarium. Cycling a fish tank is a bit complicated at first until you’ve done it once or twice. In this article, I will cover 6 signs to look for that will tell you an aquarium is cycled.

An aquarium is cycled when the ammonia levels of the is under 1 ppm, but ideally closer to 0 ppm. This indicates the bacteria numbers are large enough to process all of the ammonia. There are also visual indicators, such as small bug-like creatures, algae, sponges, red algae, and burrows in the substrate.

The most reliable way to know an aquarium is cycled is to test the water using a water testing kit. The other signs will also give you a good indication of how healthy an aquarium is, and that it has been cycled.

The most reliable method and the one that is recommended the most is to test the water levels for ammonia. This is the go-to method you should use. The definition of an aquarium being cycled is when the bacteria levels are high enough to consume ammonia.

A tank is cycled when the number of beneficial bacteria has grown to a certain level. Bacteria do grow incredibly fast, but a significant amount of bacteria is required to keep up with the ammonia produced by fish and plants.

When excess ammonia is not processed it makes the water very acidic. The extra acidity is often harmful to fish and slightly burns them. It causes fish to develop health problems because they become weakened, and in some cases, fish can die.

Water testing kits like this one on Amazon are reasonably inexpensive and are almost always used by experienced fish keepers when they are cycling a tank.

NOTE: The overall rule to know that a tank is cycled is that all the ammonia added to a tank should be gone within 24 hours or so.

Typically the amount added to simulate fish in a tank is 4 to 8 ppm of ammonia. This ammonia can be added to the tank by adding pure liquid ammonia like this one on Amazon.

It’s also possible to add fish food – but only works in a tank without fish, or the fish will eat the fish food. As the fish food breaks down in the empty tank, it releases ammonia.

It’s more difficult to cycle an aquarium with fish food, compared to cycling by adding pure ammonia since it’s hard to know exactly how much ammonia you are adding. I explained this in detail, and how much fish food you should add based on the size of your tank in this article about how to cycle a fish tank with fish food.

#2: A Decent Amount of Algae Growth

According to a study done by Oklahoma State University, algae grows much faster in fresh and saltwater when the ammonia levels are lower. Therefore, a sign that your tank has been cycled is the presence of a good amount of algae on the interior of the tank.

Like beneficial bacteria, algae also feed on ammonia in the water. In the right conditions, algae can grow incredibly quickly, as fast as 3 to 6 hours. However, if the water has a good amount of ammonia, which means the tank isn’t cycled, bacteria won’t grow nearly as fast.

If your aquarium has a good amount of algae growth, which oftentimes can get a bit out of hand, then it’s a clear sign your aquarium is cycled. But, it can’t be said for sure without testing the water using a water testing kit.

Typically, cycling a tank takes 2 to 6 weeks provided the recommended method is used. If it’s been 1 month since you did everything required to cycle a tank, then chances are it is cycled. With that said, here are the signs that apply to saltwater tanks.

#3: The Appearance of Small Aquatic Bugs

When a saltwater tank is cycled it will develop into a very healthy environment for fish and other animals and will promote the growth of small aquatic bugs.

These can be visible as small white specs on the walls of an aquarium. They can also be spotted burrowing, or walking around at the bottom of an aquarium.

The only way these can get into an aquarium is if rocks or other items from the ocean are put into the tank. Rocks and other items such as sand contain the tiny eggs of these critters.

After some time they will hatch and begin living in your tank. If you notice these bugs and critters it’s a clear sign your aquarium is very healthy, and it’s virtually guaranteed your aquarium is cycled.

#4: Red Coralline Algae Has Overtaken the Other Algae

Algae growth in an aquarium is a good sign that your aquarium is healthy and likely cycled. A fully established tank will have red algae that overtake the other algae. Red algae grow similar to mold and are flat and red in color.

It’s different from red slime algae, and it grows in a circular pattern. It’s possible to have these algae in a freshwater tank but is more common in saltwater tanks. It grows outwards and gets bigger and bigger. As it does so it pushes out the other algae that are growing around it.

If you have these splotches of red algae growing and they are about 1 inch or so in diameter you can be sure the water in your aquarium is very healthy, and it’s also virtually guaranteed your aquarium is cycled.

#5: Sponges Growing in Any Areas of the Tank

Sponges are a sign of a healthy aquarium and take some time to take hold. Virtually all types of sponges can only survive in an aquarium that is very established.

The reason is they feed on tiny organisms in the water that are only present in very healthy tanks. Freshwater sponges are not as common but do exist.

Sponges get into the tank if they are present in things that are brought into a tank from nature. Such as sand substrate from a beach, or a piece of driftwood. Most people report sponges are difficult to keep alive.

So, if some have managed to survive and are growing in your tank, then it’s a good sign it has been cycled. This method of seeing whether your aquarium is cycled is not very reliable. Sponges won’t grow even in a tank that has been cycled, but when they are present it’s a clear sign your tank has been cycled.

#6: Tubes and Empty Spaces in the Substrate

The interesting thing about substrate in an aquarium is the area against the side of the tank provides a cross-section so you can see what is going on underneath the surface of the substrate.

A clear indication your tank is cycled is if there are burrow holes, or empty spaces visible below the surface of the substrate. These burrows are caused by worms, whereas voids in the substrate are pockets of bacteria.

If you can see either of these in the substrate then it’s almost guaranteed your tank is cycled.

How Long Does It Take a Tank To Be Completely Cycled?

It’s necessary to cycle a fish tank so that fish will survive. However, the sooner a fish tank is cycled, the sooner you can start enjoying the fish tank. So, here is how long it takes for an aquarium to be completely cycled.

On average, it takes 2 to 6 weeks to completely cycle a fish tank. The limiting factor is how fast beneficial bacteria grow. For a tank to be considered cycled, ammonia is added so that it has 4 to 8 ppm of ammonia. If it’s cycled the ammonia will lower to 0 ppm within 48 hours.

When the beneficial bacteria numbers are high enough for that to occur, an aquarium will be able to handle the ammonia produced by fish and other aquatic animals.

With that said, it’s a good idea to only add a few fish, then wait a few days, and add a few more fish. Doing so will help you identify if there are any issues with the water quality.

Can You Put Plants in an Aquarium That Isn’t Cycled?

Adding live plants to an aquarium is a good idea for most species of fish and aquatic animals. Cycling a fish tank is a critical step, and is strongly recommended to be done before adding fish or other animals to it. Is it possible to put plants in an aquarium that isn’t cycled?

Generally, you can put plants in an aquarium that isn’t cycled. As plants adjust to the environment in the aquarium they release ammonia, which can make it difficult to estimate how much ammonia you added to the tank to cycle it. But, you can add plants before or after you cycle your aquarium.

Therefore, it’s a matter of personal preference when you add plants to an aquarium. A common method for cycling a fish tank, and one that works well is to add pure ammonia.

Then wait a few weeks or more and test the water to make sure the ammonia has been broken down by the beneficial bacteria.

Typically, you want to add ammonia in a fairly precise amount, but because plants produce ammonia in a fish tank, it can change how much ammonia is in the tank.

In general, it’s not enough to make a significant difference in ammonia levels. But, it is something to be aware of when cycling your aquarium.

Will a Fish Tank Cycle on Its Own?

Cycling a fish tank happens over time. But, commonly ammonia and beneficial bacteria are added to speed up the process. Here’s a rundown of whether a fish tank will cycle on its own.

As a general rule, a fish tank will cycle on its own. However, it will take many months, and sometimes as long as 6 months. Whereas, if you cycle a fish tank using the common method of adding ammonia and beneficial bacteria it will cycle in 2 to 6 weeks or less.

Overall, it’s not a good idea to let a fish tank cycle on its own unless it’s a backup tank and one that you don’t plan on using for a very long time. Even then, it’s generally better to have it ready sooner rather than later. To do that you should cycle it using the adding ammonia and beneficial bacteria method.

For a full explanation and step-by-step instructions for how to cycle a fish tank using the method most experienced aquarium owners use refer to this article that I wrote that covers how to cycle an aquarium with ammonia. 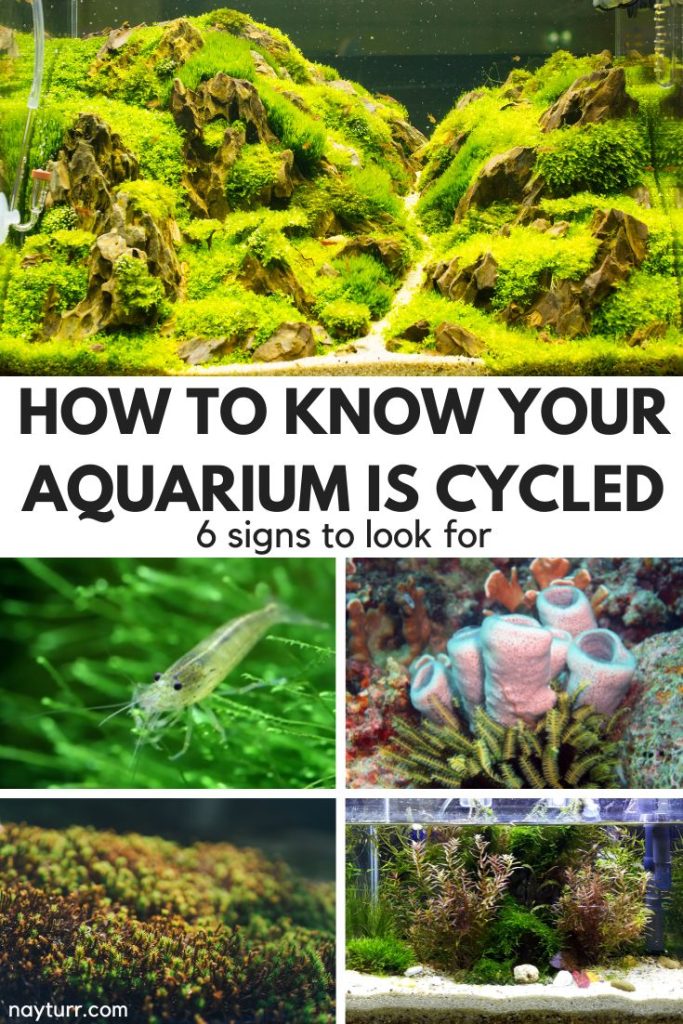