As a general rule, it is possible to cycle a fish tank in 24 hours. To do it you need a water filter from an existing tank that is already cycled, and/or add the recommended dosage of Fritzyme 7 Live Bacteria (this live bacteria on Amazon is great value).

Usually, if you just put water into a fish tank it will take 4 to 5 weeks to cycle to produce enough beneficial bacteria so that your fish don’t suffer or die. It’s important to know where to get an existing fish tank filter if you don’t already have one.

So, below I will explain where to get one, and how it’s possible to cycle a fish tank in 24 hours.

How To Cycle a Fish Tank in 24 Hours

In general, you simply place a water filter from a tank that has already been cycled into your new fish tank. Within 24 hours it will be completely cycled. Adding sponges and items from an established fish tank can also be good to promote the growth of beneficial bacteria.

An existing water tank has a large number of beneficial bacteria, these bacteria grow all over the physical surfaces of the tank and are particularly concentrated in the water filter.

Where To Get an Established Water Filter or Sponge

If you’re new to keeping fish, then you won’t already have a water filter that is cycled. Therefore, it can be a bit tricky to know where to get one.

There are three places you can get a used water filter or sponge with a lot of bacteria in it:

Fish-keeping is a really fun hobby, and there are almost always local groups of people who keep fish, and there are a lot of benefits to knowing people with aquariums. Many hobbyists will keep a whole room dedicated to fish tanks, and swap fish species with each other.

Experienced fish keepers are aware of the long amount of time it takes to cycle a fish tank. So, often they will have a few cycled filters as a backup. If you join a fishkeeping group, people are more than happy to help a new fishkeeper, and will gladly give you (or sell for very cheap) some cycled medium, like a pre-cycled water filter.

The next place you can find a pre-cycled water filter or sponge is with family or friends that also keep fish. A friend will typically be happy to give you the sponge that is currently in their water filter. Especially, if you say you will give them one back!

TOP TIP: People who have a lot of aquariums almost always have a pre-cycled water filter you can borrow to get your tank started.

Lastly, some pet stores (particularly those that specialize in fish) sometimes have some pre-cycle water filters or mediums, such as a sponge or sponge-like material.

Sponges are particularly good at holding bacteria. Placing them in the compartment of your water filter, or somewhere in your tank (out of sight if possible) will increase the levels of beneficial bacteria.

A piece of sponge that has been placed in the water filter compartment or in the tank will have a large number of beneficial bacteria growing on it in about 1 month.

Squeezing one of these sponges out into an established tank, and leaving it somewhere in the tank will speed up the time it takes to cycle a fish tank. It will also allow the fish tank to cycle at a fast enough rate once new fish are placed in it.

Keeping a Close Eye on the Ammonia Levels

The main nutrients that you need to be aware of when cycling a fish tank are ammonia and nitrite.

FUN FACT: Ammonia is produced by fish and snails when they poop!

During this time the ammonia levels in the water will be too high for all species of fish. This has the effect of making the water acidic which can burn the fish. While they might not show outward signs of this happening, they will be in a weakened state, and it’s more likely they will:

Adding Fish – Do It Slowly

It’s recommended to get a good water testing kit, like this one from Amazon, and measure the levels of:

You need to be sure these levels are not too high before adding your new fish to the tank. However, when you add fish you should also do so slowly because each fish produces ammonia.

NOTE: Adding new fish to the tank slowly will give the bacteria enough time to break down the ammonia until the levels of bacteria have increased enough to handle more fish.

How To Know If Your Tank Is Cycled

A cycled tank is one where there are ample amounts of beneficial bacteria to handle the amount of ammonia put into the water tank by fish. Bacteria are often not visible to the naked eye, so it’s hard to know what the levels are and if they’re high enough.

Here’s how to tell if your fish tank has been cycled:

Use a water testing kit (like this one from Amazon) that can test the levels of:

They should be at healthy levels for the specific species of fish. Also, spikes in the levels of any of these should not go above healthy levels.

Each species of fish is different and requires different maximum levels of:

Refer to the various care guides for your specific species of fish online to see what the maximum levels should be to keep them healthy and happy.

If you notice your fish are sick or weakened, it is a sure sign the levels of ammonia, nitrate, and nitrate, are too high. For this reason, it’s a good idea to have a backup tank that is already established when possible.

NOTE: When you have an established backup tank, you can take the fish out of the existing tank until you identify what’s causing the issues, and return it back to a healthy state for your fish.

How Long Does It Take To Cycle a Fish Tank?

Cycling a fish tank is required before putting fish into a new fish tank. Otherwise, ammonia and nitrite levels will get too high and can damage or kill them. But, how long does it take for a fish tank to cycle completely?

To decrease the time it takes to fully cycle a tank by half, add items from an established tank such as:

Then the process would only take 3 to 4 weeks.

There are also specialist liquids that add beneficial bacteria to the water. However, fish-keeping experts are of the opinion that virtually all of them are ineffective. But, they do recommend a specific one called Fritzyme 7 that contains live bacteria in it (you can purchase it here on Amazon).

Unlike other liquids that claim to help with cycling a fish tank the liquid in Fritzyme 7 actually looks alive. It also has an expiry date that it needs to be used otherwise the live bacteria will die.

Do You Have To Wait 24 Hours To Put Fish in a Tank?

In general, you do not need to wait 24 hours to put fish in a tank. Provided the fish tank is cycled, fish can be put into it straight away. However, it’s a good idea to only add a few fish at a time. This will allow beneficial bacteria to keep up with the added ammonia in the water. 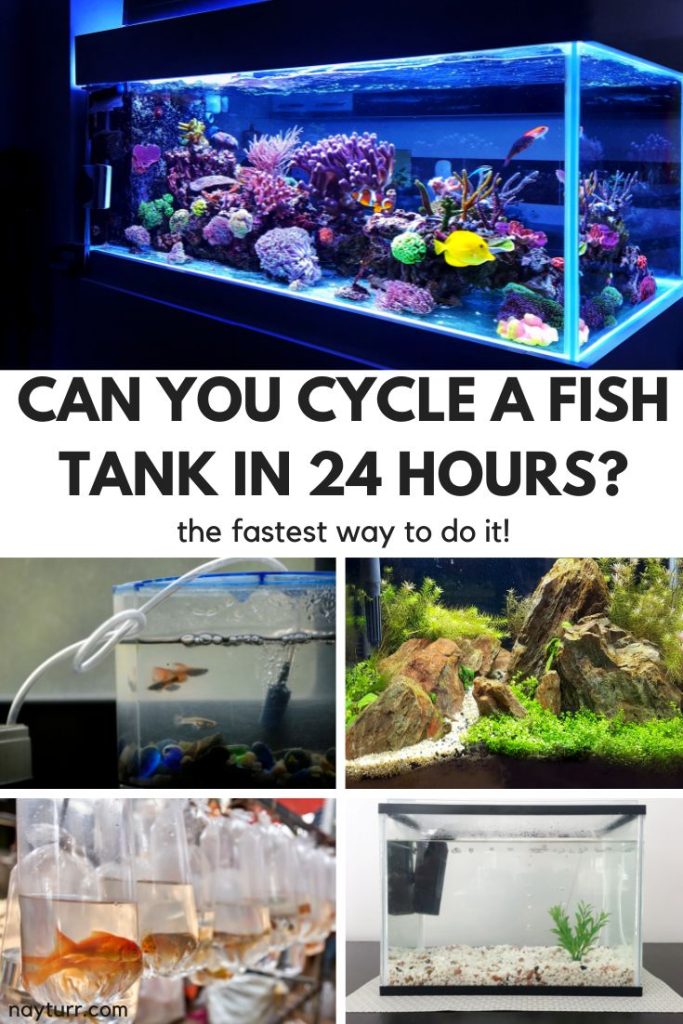