Ah, the sound of a cat purring. There’s nothing quite like it. Have you ever wondered if big cats can purr like your house cat? If so, you’re not alone; it’s a question many people wonder about

While most domestic house cats can purr, their larger counterparts, like lions, tigers, leopards, etc. generally can’t purr. They don’t have the special muscles required to generate a purr in the same way that a domestic cat can.

So what’s the deal? Let’s take a closer look at how purring works, why big cats can’t do it, and which big cats (yes, there are a few!) can purr.

First, let’s start with a quick refresher on how purring works.

All cats — big and small — have muscles in their throat called laryngeal muscles. These muscles help the cat make a “meow” sound. When a cat purrs, these same muscles vibrate at 20-150 vibrations per second.

This vibration causes the vocal cords to open and close rapidly, which creates that characteristic “purring” noise.

Why Cats Make a Purring Sound

Though we often associate purring with contentment and happiness, a few different theories exist on why cats make this sound.

One theory is that purring is a way for cats to communicate with each other. For example, a mother cat may purr to signal her kittens that it’s time to nurse.

Alternatively, two adult cats may purr to greet or bond with each other. Another theory is that purring is a self-soothing mechanism — a way for cats to calm themselves down when they’re feeling stressed or anxious. This makes sense when you consider that many people find the sound of a purring cat relaxing.

Finally, some experts believe that purring is simply a way for cats to show happiness and contentment. Regardless of the reason, it’s clear that purring is an integral part of feline communication — and we’re lucky that our feline friends are so willing to share this exceptional sound with us.

Now that we know how purring works, let’s talk about why most big cats can’t do it. As you might recall from high school biology, all mammals have a diaphragm. This sheet of muscle separates the chest cavity from the abdominal cavity and is essential for breathing.

Our diaphragm contracts and drops down when we inhale, pushing air into our lungs. When we exhale, the diaphragm relaxes and moves back up into place.

In domestic cats, the laryngeal muscles are attached to the diaphragm. This means that when a cat inhales and its diaphragm contracts, those muscles that allow it to purr are also contracting.

However, the laryngeal muscles are not attached to the diaphragm in big cats like lions and tigers. Instead, they’re bound to other muscles in the throat. This makes it impossible for big cats to contract those muscles and purr while breathing.

Which Big Cats Can Purr and How?

If most big cats can’t purr, which ones can? Interestingly enough, all of the following big cats CAN purr:

Cheetahs are unique cats. Unlike other cats, cheetahs can’t retract their claws. This means they can’t climb trees and escape predators like other felines. Cheetahs have developed some unique hunting adaptations to compensate for this disadvantage.

They are the fastest land animal, reaching speeds of up to 70 miles per hour! In addition to their speed, cheetahs are also incredibly agile. They can make sudden turns and stop quickly, which helps them catch their prey.

Another adaptation is their ability to purr. While most cats purr when they breathe in and out, cheetahs can purr continuously — even running at full speed!

FUN FACT: Purring is thought to help relax cheetahs and increase their endurance.

Cougars are members of the Felidae family, which includes domestic cats. Like their smaller cousins, they have a flexible hyoid bone in their neck that allows them to make a “chuffing” sound.

Scientists believe that cougars use this sound to communicate with each other and to mark their territory. It’s not quite the same as purring… but almost.

Leopards communicate through several vocalizations, including:

The most common vocalization leopards make is a purr. They can purr both when inhaling and exhaling, unlike housecats, which can only purr when exhaling.

Big cats will use different sounds to communicate other messages, but a lot of the time, a leopard will purr when they’re content.

What Noises Do Big Cats Make?

If big cats can’t meow or purr as your housecat does, what noises do they make?

Well, lions roar — a lot. Male lions can roar as loud as 114 decibels, which is about as loud as a jet engine taking off. Lionesses also roar, but not as often or as loud as males. Instead, they mostly communicate via:

Tigers also communicate via roaring; however, they sometimes bleat like sheep or grunt like pigs when they want to establish dominance over another tiger or call their cubs over to them.

Jaguars also make similar noises to tigers; however, they sometimes hiss — yes, like a snake — when they feel threatened.

Lastly, cougars tend to yowl more than any other big cat; they’ll growl when happy or hiss when angry or threatened.

While house cats can purr, the big cats in the world can’t. That’s because they don’t have the muscles to make comforting sounds.

However, these majestic creatures can roar and make other fascinating sounds that will leave you wondering how something so powerful can be so gentle. If you like big cats purring, we recommend seeing a:

These big cats can purr like how a housecat does.

But still, practice caution around big cats. Unlike house cats who are typically docile and enjoy human company when raised around them from an early age, big cats can be dangerous around humans unless they’re trained and raised around them.

If you come across one of these animals in the wild (or even at a zoo), remember to give it some space!

Follow our blog for fascinating information about big cats and all things feline! 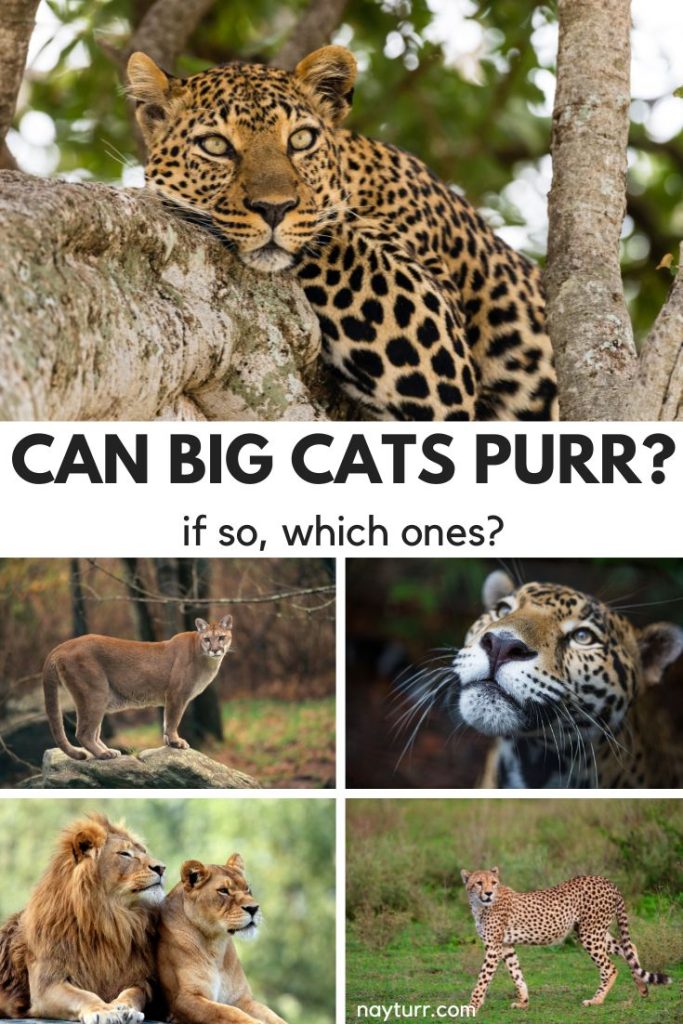