Amphibians are generally considered to be quite sensitive creatures when it comes to their living environment because of their permeable skin. Amphibians use the water in their environment to help keep their skin wet, as well as to breed and find food. So, can amphibians live in saltwater, or would saltwater completely kill them?

There are certain amphibians that can tolerate being submerged in saltwater for a period of time. They have developed specialized processes in their bodies and glands in their skin to help them combat the salt from the saltwater defusing into their bodies through their permeable skin.

Can Amphibians Live In Salty Water?

In general, most amphibians are associated with fresh water like lakes, ponds, and other small bodies of water. They tend to use this water for breeding and finding food. There are quite a few scientific studies that have shown that certain amphibians are particularly vulnerable to salt water at different stages in their lives.

There are three stages of life that an amphibian goes through the embryo, then the larva stage, and then the adult stage. The embryo stage is when certain amphibians are more vulnerable to salt water.

The reason for this is that salt water disrupts the water and ionic exchange between permeable membranes. With this being said, there have, however, been a number of recent studies that have found amphibian species that are tolerant to salt water and have adapted to saltwater habitats, such as coastal marshes.

A relevant fact to keep in mind is that certain amphibians do not actually live in the salt water. They are simply tolerant of it than other amphibian species, which allows them to be submerged in the salt water for an extended period of time.

Generally, these salt-tolerant species will still seek out a lower salinity body of water to breed in and to lay their eggs in. The saltier bodies of water they will reserve for hunting and cooling off rather than procreating.

Since these studies, there have been a variety of scientific observations that have increased our knowledge of amphibians that can tolerate saltwater habitats in the natural environment incredibly.

In a recent review of the scientific studies that have been done around amphibians and their tolerance to salt water, there have been 144 species of amphibians from 28 families from around the world found that can tolerate salt water.

Most of these scientific studies found that amphibians that live in saltwater habitats are mainly from coastal regions where the habitat gets flooded by sea water in a predictable way.

So, there are certain species of amphibians that can survive in saltwater, but not all of them are able to adapt to this salty environment.

The tolerance evolved in the coastal species because when their homes were flooded by seawater or salty water, the individuals that could not tolerate the salinity died, leaving the ones with high salinity tolerance alive.

What Happens To Amphibians That Can’t Tolerate Salt Water?

What will happen to certain amphibian species that cannot tolerate saltwater if they get placed in saltwater?

Amphibians, which are toads, salamanders, frogs, and newts, most likely evolved from freshwater creatures that were fish-like, for example, the lungfish. Amphibians tend to be skin breathers, which means that their skin is highly permeable to oxygen, water, and salts, as well as carbon dioxide.

The amphibians that live in fresh water generally have a higher salt content in their bodies compared to the water that surrounds them. This means that the amphibians will absorb water through osmosis and lose some salts from their body by diffusion through their skin.

Because their skin is highly permeable, they would begin to lose water and gain salts in their bodies at an alarming rate; this is a process for which their particular physiology would not be able to balance out the salts and water in their bodies. This will lead to dehydration, and the freshwater amphibians will die.

Now that we are aware of the freshwater amphibians and what would happen to them if they were submerged in salt water let us go through a few amphibians that are tolerant to saltwater.

The frog that is the most well-known amphibian that can tolerate salt water is the Crab-eating Frog (Fejervarya Cancrivora). This frog comes from the southeast of Asia. This is a unique species of amphibians that can live in both freshwater and seawater that has a salt concentration of up to 75%.

The Crab-eating frog can adapt in a matter of hours when moving from a freshwater environment to a saltwater one.

The Crab-eating frog is able to adapt this way by rapidly adjusting their levels of urea in their body tissues. This change helps the frog to avoid the excessive water loss that it may experience through its skin when submerged in salty water.

In addition to this ability to change the level of urea in their bodies, these amphibians also have three glands that are in their skin. These glands are called vacuolated glands, mucous glands, and mixed glands. These special glands help prevent excess salt from entering the frog’s body.

The Natterjack toad (Epidalea Calamita) is another amphibian that is known to live in both freshwater and saltwater habitats. This species tolerates saltwater much like the Crab-eating Frog.

As the tadpoles develop and grow, they start to go through a metamorphosis; this is where they develop lungs and legs that are needed to survive on land. Once the tadpoles have changed into adult amphibians, they still need to live in habitats that are damp as their skin still needs to stay moist and not dry out.

For this reason, most amphibians will live in forests, woodlots, streams, springs, meadows, marshes, ponds, lakes, bogs, rivers, and swamps. These habitats can keep the amphibians moist as well as warm as amphibians are cold-blooded.

In these habitats, there are some amphibians that will live on the ground, in the water, or even in the trees, and some will go between them all.

There are many different species of amphibians, and there are certain types of amphibians that can tolerate salt water; however, they do not live in the saltwater as such. They would use the salt water for hunting and sometimes breeding. They can survive this harsh environment due to the specialized processes and organs that they developed over hundreds of years.

Although these saltwater tolerant amphibians are few and far between compared to other pieces of amphibians that live in freshwater habitats, these amphibians are fascinating creatures that could teach us a lot about biological evolution. 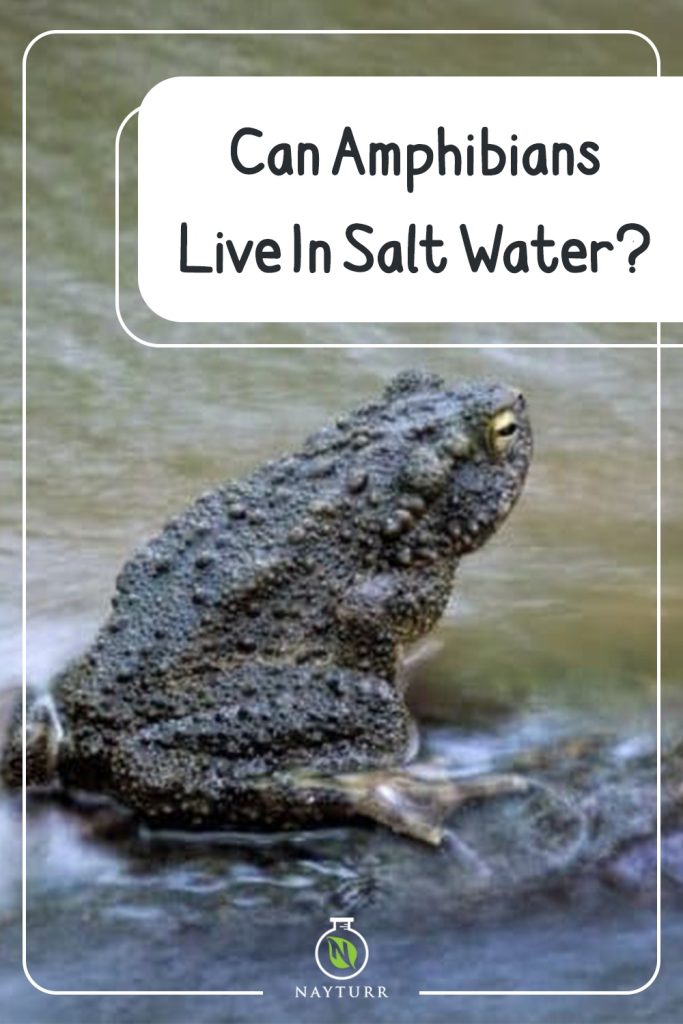