Although the two main natural fertilization categories are internal and external, hermaphroditism uses self-fertilization, and human technology introduced informal fertilization in a laboratory. In addition, the fertilization processes and stages vary immensely between the different species.

Internal and external fertilization is typically regarded as the two fertilization types. Because nature consists of many organism types that use fertilization to reproduce, many classify perfectly in either of these two methods. First, however, let’s complete the guide and determine if there are other fertilization types and the stages that relate to each.

The 4 Fertilization Types Of All Organisms

In addition, some animals use internal fertilization, but the development is external.

FACT: Mammals like cats, dogs, and pigs have internal fertilization. The zygote forms inside the female and receives nourishment from her.

In addition, spawning animals typically do not protect their eggs, although some hide them and others carry them in pouches. Also, most frogs fertilize externally when the male frog sits on the female’s back and fertilizes the eggs while the female releases them.

Here’s a short video that showcases Internal vs. External Fertilization:

In vitro fertilization (IVF) is an example and consists of processes to enhance and fuse fertility. Typically, it involves the collection of mature eggs from the ovaries of a woman. After that, it combines them with sperm from a male outside the womb for fertilization in a laboratory. Finally, the fertilized egg is returned to the uterus to develop normally.

NOTE: This process happens externally, but not naturally.

In contrast to allogamy, autogamy is self-fertilization. This is when two gametes from one individual fuse. Typically, this occurs in hermaphrodites, of which flatworms and certain plants are examples.

On the other hand, earthworms have modified external fertilization whereby each hermaphroditic earthworm exchanges sperm with another, create a cocoon, and deposits eggs and sperm into the cocoon.

Human gametes or reproductive cells are in male and female gonads. The male gonads or testes hold the sperm to fuse with the woman’s eggs in her gonads or ovaries.

A pregnancy starts by joining a woman’s egg with a man’s sperm. Next, fertilization happens in a fallopian tube, the link between an ovary and the uterus. The fertilized egg then travels to the uterus, and the embryo starts growing.

Animals can fertilize internally or externally, depending mainly on the method of birth. Animals with embryos that develop within the animal’s body, and animals that lay hard-shelled eggs, use internal fertilization.

FACT: The fusion of sperm and eggs within the female’s body happens when the male implants his sperm into the female tracts.

There are two methods of implantation, namely, – copulation or cloacal kiss. Copulation is when the sperm transfers through male penetration and ejaculation into the female cloaca. A cloacal kiss is when, for example, two birds touch their cloacae together, and the transfer of sperm happens.

Animals that produce eggs with thin egg membranes will reproduce by external fertilization. The fertilization happens through joining gametes outside of the body by typically a spawning event. Both sexes release gametes into an aquatic environment or can occur when eggs are laid by a female and are then fertilized by a male.

Typically, fertilization in seed plants happens after pollination when the pollen (male microgametes) from one plant transfers to the stigma (the female organ) to another. Then, the pollen soaks up water, and germination occurs. After that, the germinated pollen will sprout a growing pollen tube to penetrate the plant’s egg through a micropyle pore.

In addition, flowering plants have a secondary fertilization process where two sperms from each pollen grain will take on the traveling process. One sperm cell will fertilize the egg cell to form a diploid zygote, and the other sperm cell will fuse with a second female gamete or central cell. This additional fertilization creates a triploid cell, which will swell and develop in a fruiting body.

Hermaphroditism is when some organisms are neither male nor female or have both male and female reproductive parts. One hermaphrodite example is sea anemones, which makes it possible for them to self-fertilize.

Hermaphroditism also can change sex from male to female or vice versa. In addition, some fish like wrasses may change from female to male while they mature. These alternative fertilization methods are successful as they do not need natural-born males or females to reproduce.

The Process and Stages Of Fertilization

First, ovulation must happen before fertilization. For example, in humans, ovulation occurs once a month during the female menstrual cycle. This will release an egg cell from her ovaries, and the first stage of fertilization is set. In other animals, ovulation has cycles of different lengths or may occur during sexual intercourse.

The four stages or processes of fertilization ensure that the appropriate egg and sperm can find each other and that only one sperm enters the egg. They are:

Fertilization is the key to the existence of all species, and without reproduction, there would not be a continuum of any living organisms in our world. The main natural fertilization categories are internal and external. However, hermaphroditism can self-fertilize, and human technology makes it possible to fertilize informally. In addition, the processes vary between species and organisms. 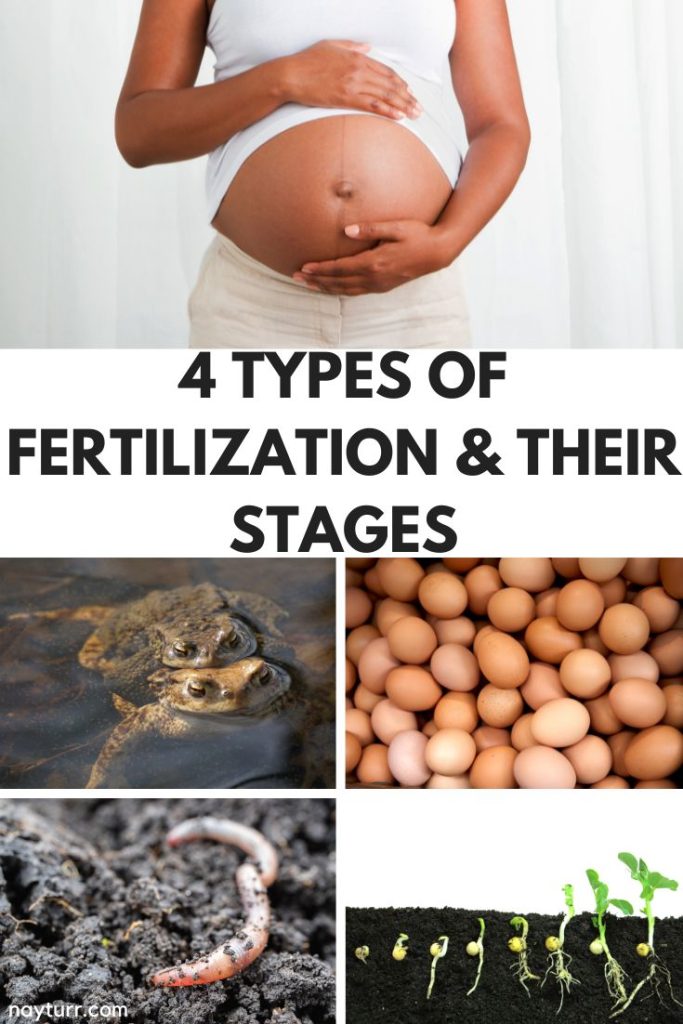