Peacocks – these majestic birds are often seen as symbols of pride, love, and luxury. Their distinctive silhouette and gorgeous plumage have made them the subject of myths and masterpieces for centuries.

If you’ve never seen a peacock in person, the idea of them is intriguing and enchanting, completely at odds with the rustic air of a homestead or farm. However, there are actually many reasons peacocks are good for farming, as I learned from a farm I helped out at last year.

Farmers keep peacocks because they’re excellent watchdogs at night and they can eat pests and rodents around the farm. They can also provide feathers, meat, and eggs, and they don’t require a large monetary investment. Lastly, their exceptional beauty can improve the aesthetic value of any farm.

Whether you’re just curious about why peacocks are found on farms or you’re about to jump into homesteading or farming for yourself, I’ll make sure all of your questions are answered in this article – so keep reading!

Peacocks are large pheasants known for their colorful, iridescent tail feathers. Their tail feathers form a long train that makes up 60% of their total body length, which they can spread out into a large fan. They use their tails in courtship displays and mating rituals.

NOTE: While the name “peacock” technically only refers to males, it is typically used to encompass both sexes. The correct general term for both sexes is peafowl, and females are called peahens. Females typically have fewer colors and shorter tails.

The typical Indian peafowl has a vibrant blue head and neck, with a tail colored in blue, green, and gold. However, they’re not limited to those colors – varieties exist as the result of selective breeding over thousands of years:

NOTE: For more information on different types of peacocks, check out my article “3 Types of Peacocks & Some Interesting Facts About Them“

The majority of peafowl bred and kept within the U.S. are blue peafowl. They’re hardier than the other two species, so they can withstand the colder climate in the northernmost states. Green peafowl is also bred within the U.S., but if you’re in the northern states, you’ll need to build heated shelters for these cold-intolerant birds.

What Is the Purpose of Having a Peacock on a Farm?

When you’re listing out farm animals, it’s going to be a while before you reach peacocks after:

However, peacocks are actually pretty handy on a farm. Here are some purposes that peacocks fulfill on a farm:

If you keep a large farm complete with a vulnerable herd of livestock, ensuring their safety from predators day and night can be difficult. There’s also the possibility of run-of-the-mill intruders and burglars.

Many farmers get guard dogs to defend their property, but peacocks also have a surprising ability they can use to protect your farm – their loud screeches.

During the day, they love roaming about their territory. They want to keep watch and observe everything that happens, always alert for potential danger.

During the night, even when everyone’s asleep, their finely-tuned sense of hearing will allow them to detect movement in the area. If they feel alarmed or threatened, they’ll start screeching loud enough to wake the dead.

In the wild, the typical diet of peacocks consists of:

They’re ground-feeders, which translates well to keeping a farm free of pests.

NOTE: Peacocks aren’t picky eaters, so some farmers that have trouble eliminating rodents, amphibians, snakes, or a wide variety of insects on their farms use peacocks to keep pest populations under control.

This eliminates the need for harsher pest control methods, but it does come with a downside: the birds are just as likely to eat vegetables, flowers, and other items on the farm.

A Source of Meat and Eggs

Chicken might be the most popular poultry to raise, but other types do exist, and peafowl is one of them. If you have several peacocks and peahens, you can use them as a source of edible and nutritious meat and eggs.

NOTE: Peafowl eggs are nearly thrice the size of regular chicken eggs and have a similar feel and flavor, but are somewhat gamier. The same goes for the meat.

A downside is that peahens only lay around 20 eggs per year, and peafowl meat doesn’t have a particularly high demand in the U.S. Without a large-scale operation, you’re better off just treating them as pets rather than poultry.

Some consider raising peacocks due to their relatively long lifespan, which averages around 12 – 15 years. Having a long-term companion on the farm can be a great boost for both morale and peace of mind – you’ll know the habits of your peacock inside and out, so you’ll be able to depend on it for danger alerts, pest control, and more.

Did you know: Peacocks can live up to 50 years?! If you look after them well, they’ll look after you in turn.

NOTE: For more information about how peacocks like to interact with humans, check out my article “Are Peacocks Friendly to Humans?“

Beautification of the Area

For some, the absolute awe that a peacock inspires is the only reason they need to raise peacocks on their farm. Who can blame them? No other bird comes close when it comes to putting on a show.

Having peacocks strutting proudly around your farm can definitely lend to its appeal. It can draw in curious neighbors and visitors, and encourage them to learn more about the birds and the farm itself.

NOTE: Peacocks also shed their beautiful tail feathers yearly. These feathers can be collected and used for various bits of ornamentation, especially in fashion and accessories.

What Are the Benefits of Keeping a Peacock?

Aside from the purposes they can serve on a farm, keeping peacocks as farm animals also has some distinct benefits.

Here are some reasons peacocks are good for farming, especially when you’re just starting out:

Despite their luxurious appearance, peacocks aren’t extremely expensive. An adult peacock can cost anywhere from $35 – $275, on average. If you want a healthy peacock with good genetics (e.g. straight toes) and no flaws, you’ll be looking at the more expensive end of the scale.

Easy to Start Small and Scale Up

While you do need a proper shelter for them, peacocks aren’t too hard to keep. They eat a broad range of food and can get along with other animals reasonably well. If you start out with just a peacock and a peahen, you can get a few more peahens without much problem.

NOTE: Territory only becomes a problem when two males are kept together, especially during mating season.

While they’ll never be as cuddly as a domesticated cat or dog, peacocks can still develop a bond with people. If you take good care of them, then over time, they’ll allow you to pet them and hold them. Sometimes, they’ll even be affectionate enough to sit on your lap and eat out of your hands.

Their adaptability is also admirable. Indian peafowls are hardy and can adapt to changes in weather and climate, so you don’t have to treat them like glass.

What Are the Disadvantages of Keeping a Peacock?

Now, even if peacocks are useful on farms, it’s not all sunshine and rainbows. There are a few downsides you should be aware of:

They Can Be Loud and Messy

Remember the loud screeches I mentioned earlier? Those can be both a blessing and a curse.

On one hand, you have a very effective alarm system. On the other hand, it can be difficult to sleep through the racket they make, especially during mating season.

NOTE: If you have neighbors close enough to hear the birds (those shrieks can be heard for miles), they’re not going to appreciate the noise.

Aside from being loud, they’re also messy. As birds, they tend to poop a lot. To make matters worse, the poop itself is sticky and smelly, so it can be a pain to clean up.

They Need a Lot of Space

Peacocks are large, majestic birds, and the space they live in needs to accommodate that. Each peafowl needs around 80 – 100 square feet of space to roam freely and prevent disputes over territory.

NOTE: Peacock enclosures need to be at least 8 feet tall to allow them to fan out their tails, soar in the air, and roost on their perches.

If you intend on letting them roam freely, you need to keep them in their enclosure for the first year and ensure they know that’s where their home is, as they may try to fly away from your property when let loose.

They Take a While to Mature

Peacocks don’t hatch with all their gorgeous tail feathers already grown. It can take around 3 years for a peacock to develop its feathers.

In addition, they shed their tail feathers once a year, typically during summer after the breeding season. Their feathers eventually grow back, but it takes around 6 months before they have full plumage once again.

NOTE: If you’re raising peahens for their eggs, you should know it can take over a year before they lay their first egg.

These factors can be frustrating for farmers that want to have these beautiful birds strutting around their property year-round.

You Need to Watch for Parasites and Health Problems

This isn’t unique to peacocks, as every type of animal has its own health problems to deal with. Peacocks are susceptible to parasites, especially those carried by chickens and other wild birds.

While they can get along with these other birds, keeping them in close proximity does heighten the risk of chickens and other poultry passing on parasites and diseases to your peacocks such as:

Caring for a peacock involves deworming them every two months and periodically checking for external parasites to ensure they don’t get overrun.

Is a Peacock Preferable to Other Animals on a Farm?

If you’re going by beauty, peacocks rank as the most beautiful animal you can keep on a farm. They can also help with protection and pest control, so they’re not just pretty trophies. Whether or not they’re preferable to other farm animals, however, ultimately depends on what you want to use them for.

If you want a steady supply of meat, eggs, or other animal produce, you’re better off raising chickens, ducks, rabbits, goats, pigs, cows, or even honeybees. Peacocks don’t produce eggs often and are prized more as pets than as food.

Peacocks can make great companions on a farm with their finely-tuned senses and natural instinct to feed on pests, but raising them requires just as much care as you would give any other farm animal — they need the right environment and attention to truly flourish. 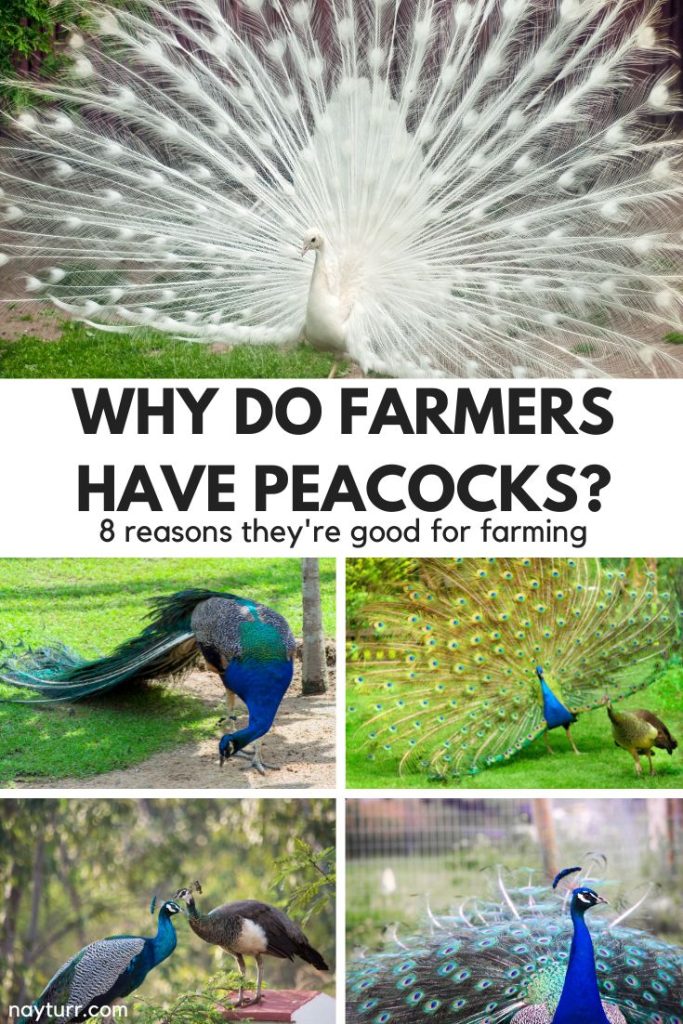