I remember my first horseback ride adventure.  I was about 8 visiting a friend who lived on a dairy farm.  They had a few horses as well that they rode.  I was so excited.

With help, I got on the back and my friend’s dad giddy-upped it to get it going. All of a sudden, it went into a pretty fast run and I hang on for dear life.  Looking back it was probably a canter or jog, but for an 8-year-old kid doing it for the first time, I felt like we were totally out of control.

I didn’t fall off.  The horse returned to where we started and I got off.  I was a bit shaken but had to admit it was a thrilling ride.

NOTE: Do you know a horse lover? Show them you care and check out our article “15 Gift Ideas for Horse Lovers”

The Vladimir Heavy Draft horse hails from the former Soviet Union. They originated in Vladimir (hence the name) and Ivanovo, villages located north-east of Moscow. Bred originally from imported draft horse stock, Vladimir has named a breed in its own right in 1946. Extremely strong, relatively docile, and fast-maturing, these horses are used both for draft work and for troika sleighs.

This German horse traces its bloodlines back to the Middle Ages. Originally used as a warhorse, the Hanoverian was later crossbred with horses from Spain and Asia to create a horse suited for the cavalry. The breed took off in 1735 when King George II (King of England but a German nonetheless) created his famous stud and training facility (still in existence today).

Akhal-Tekes are believed to have been around for over 3,000 years. They come from Turkmenistan in Northern Iran and history suggests they were originally bred by Turkoman tribes. They have historically been used by cavalry members and racehorses. Akhal-Tekes are famous for their stamina, courage, and ability to exist in barren and arid environments.

The origin of the Arabian is shrouded in myth and legend. Records suggest that Arabians existed up to 5000 years ago in the Middle East. Historically, the Arab people rode only the mares into war and reserved the stallions for breeding. Today, Arabians are immensely popular in America with breeding farms throughout the country.

The Lusitano’s origin is a bit murky, although it is thought that the current version of the breed is descended from the Andalusian (or similar breed). As with many of its brethren, the Lusitano was originally used in Portugal as a cavalry mount. Today they are known primarily for their quick-footed moves in Portugal’s bullfighting rings. They continue to be bred primarily in Portugal and Spain.

The Percheron is a French breed. Today it is bred primarily in France; there is, however, a small but thriving population in the United States. The Percheron came into being from crossbreeding between Europe’s native “Forest Horse,” and Arabians, introduced to Europe by the Moors centuries ago. Historically, the Percheron has been used for transportation and draft work, pulling everything from stagecoaches to farm equipment.

The Friesian has a long and respected history in the Netherlands. Originating in Friesland in the Northern Netherlands, this breed is considered the oldest domesticated breed in Europe.

The breed almost died out shortly before World War I as farm work and transportation became less dependent on literal horsepower. Today, its numbers are again on the uptick. While they are still primarily bred in the Netherlands, a handful of breeders exist in the United States.

The breed, as it exists today, gained dominance in the mid-1700s when the King of Prussia, Friedrich Wilhelm I, decided he wanted a new breed of horse for his cavalry. Between the World Wars, Trakehners enjoyed a brief couple of decades as outstanding competitors in the show ring.

Their population however took a nearly fatal decline after World War II. Today, the Trakehners are again on the rise. They are bred almost exclusively in Germany.

The Clydesdale is one of the most famous breeds of draft horses (Budweiser anyone?) despite being a relative newcomer to the equine world. Introduced in Scotland in the 1700s, these draft horses were used almost exclusively to pull wagons and other forms of transportation.

It was common to see Clydesdales pulling carts of milk and vegetables well into the 1960s. While Clydesdales are still bred in Scotland, they are more commonly foaled in America.

The Don has been bred in the former Soviet Union since the 1700s. Originally on the small side, the breed gained in size in the 1800s after being cross-bred with Arabians and Karabakh. Known for its incredible stamina, Don helped give the Cossack cavalry its fearsome reputation.

Today it is a popular saddle horse, although it is still sometimes used in harness in a traditional “Tachanka.” They are still bred in Russia.

Gypsy Vanner horses are the mutt of the equine world. They are descended from a mix of Friesian, Shire, Clydesdale, and Dales pony.

These extremely docile horses were originally bred exclusively in England and Ireland to pull the wagons of local gypsies (or Roma as they were sometimes known). For decades, Gypsy Vanners were bred exclusively in Britain. In the late 1990s, the breeding stock was introduced to America as well.

Fjord horses are believed to have arrived in Norway over 4000 years, and domesticated over 2000 years ago. Initially used by the Vikings as a warhorse, the Fjord evolved into a working horse, used by farmers laboring in the Norwegian mountains. While Norway continues to set the breed standard, Fjord horses are bred in multiple countries throughout the world.

Ironically, “Pinto” is not a breed unto itself. Rather it’s a color pattern that may apply to any one of a number of breeds. A Pinto horse is simply a horse that has large splotches of white and another color. While Pinto colored horses have existed since ancient times, today they are most commonly found in the United States.

The Pura Raza Espanola has existed for centuries in Spain. The breed, as it’s known today, was created by King Felipe II in the mid-1500s. The Spanish King desired to bring to life the idealized horses depicted in paintings and statues. Breeding of the Pura Raza Espanola is strictly regulated by the ANCEE (National Purebred Spanish Horse Breeders’ Association), which has members from throughout the world.

The Appaloosa, commonly pictured in old Westerns, was first bred by Native Americans in the American West. Their ancestors, however, are not American, but Spanish. When Spaniards arrived in America, the Native Americans were attracted to the spotted coats of the Spaniard horses and bred them to American horses.

The Appaloosa remains incredibly popular in the United States, though breeders exist throughout the world.

As might be evident by its name, the Tennessee Walker is a horse that was originally born and bred in the United States. The horse was developed by plantation owners in the Antebellum South who needed a horse that could easily roam the vast plantations. Today, Tennessee Walkers continue to be bred almost exclusively in the United States and Canada.

The history of the Shire horse is a bit convoluted. The short story is that the Shire is descended from the Great Horse, a breed brought to England almost 1000 years ago. The name “Shire” was not applied to the breed until the late 1800s. At that time, Shires were used for draft work, primarily pulling beer delivery carts. Today they are bred predominantly in England and the United States.

Shetland Ponies can trace their ancestry back to the Bronze Age. They originated off the Scottish coast in the Shetland Isles. The Scots used them as beasts of burden, pulling carts and carrying coal and peat. In the 1800s, the ponies were exported to England, and later America, where they were used in the coal mines. Today they are bred in the UK, America, and Canada.

Knabstruppers are newcomers to the horse world. The first foal was born in Denmark, on the Knabstrupgaard estate, in the mid-1800s. Owing to the combination of inbreeding and a fire that killed 22 breeding horses, the Knabustrupper almost went extinct shortly after coming into being. Today these horses are bred in Denmark and the United States.

Marwari horses, a result of crossbreeding between Arabians and Indian ponies, have existed in India for centuries. As with many other types of horses, the Marwari was used historically as a cavalry horse. Until recently, the Marwari was bred exclusively in India. India is still home to the largest breeding farm in the world.

Thoroughbreds came into being in England in the 17th century when native English horses were crossed with Arabians. Unlike many other horses that started as work animals or bred for cavalry riders, Thoroughbreds have always been used for racing and occasional saddle riding. They are an incredibly popular breed. Over 100,000 foals are registered as being born each year worldwide.

The Kladruby is a Czech horse that is both old and rare. First foaled in 1579, the breed was created for carriage work, and was usually used in groups of four or six, pulling the imperial coach to important and solemn occasions. Today, Kladrubys are bred almost exclusively at the Kladruby stud farm in the Czech republic.

Like the Shetland Pony of Scotland, the Welsh Pony is a strong and hearty breed. Originating centuries ago in England (Wales to be specific), this friendly and adaptable breed has been used for everything from pulling carts to carrying riders. Today, Welsh Ponies continued to breed in England, as well as throughout the United States and Canada.

Horse Anatomy: Chart Setting Out the Parts of a Horse 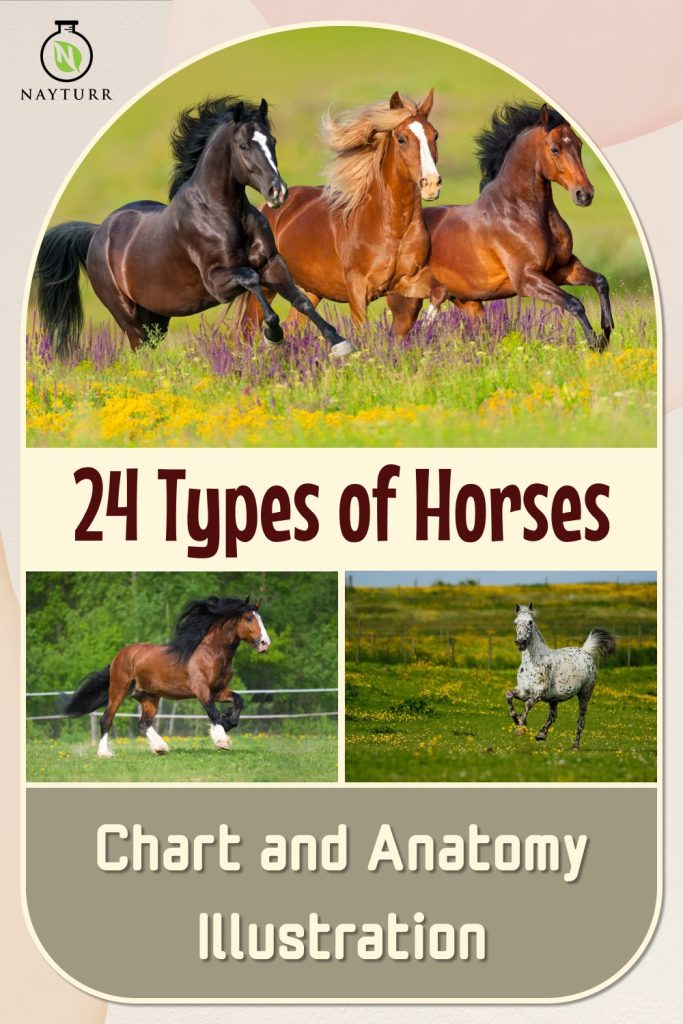