Did the egg come first or the hen?

Whatever the answer might be, you may be surprised to find out that there are currently more than 25 billion chickens in the world at any given time!

Interestingly enough, these birds were first domesticated for the purpose of cockfighting and entertainment rather than for food. But now, a total of about 80 billion chickens are reared every year for meat and egg production all over the world.

Whether you are planning to step into the lucrative business of poultry farming or are thinking to raise a small flock in your own backyard, you ought to know the different types of chicken breeds that you can choose from. Be it for dietary needs, exhibition purposes or just as a simple pet, the following is a guide to the most common types of chicken breeds available in the market.

Minorcas have a thick and glossy black plumage with a tint of emerald green and large, bright red combs and wattles that make them tolerant of hot weather. Also known as Red Faced Black Chicken or Red-Faced Black Spanish, these chickens have a wonderful temperament and are mainly kept as an ornamental breed.

Minorcas are not broody but they do lay enormous chalky-white eggs.  They come in different varieties including a single comb and rose comb while the color variations include black, blue or white. On average, the weight of these chickens ranges from about 2.5 kg to 3.5 kg.

Minorcas will be an excellent choice if you want to raise beautiful show birds or produce large-sized eggs. Being hardy, they are great foragers and good for free-range. However, be warned that Minorcas tend to think that they can fly, are slow to develop and not suitable for meat.

Friesian or Frisian is an ancient breed of chickens from Friesland, Netherlands. They can be found in a vast array of physical features in the native region but choices are limited elsewhere. Friesian chickens are flighty birds with strong foraging abilities but are not inclined towards broodiness. They lay small white eggs and weigh about 1.5 kg when matured.

New Hampshire Red is a heavy, dual-purpose breed of chickens that comes from Rhode Island Reds in New Hampshire, US.  The local farmers selectively bred the chickens to develop a breed that matures fast has thick feathers and produces large brown eggs in abundance.

This unique breed has wild origins that can be traced to the isles of Sumatra, Java, and Borneo in Indonesia.

Sumatras are free birds and do to respond well to confinement. Featuring rich green plumage, a pea comb and an elaborate tail with sickle feathers, Sumatra roosters are a wonder to behold.

The hens are equally attractive, which is why these chickens are mostly kept for exhibition. They may be difficult to raise and look after, but Sumatras are smart, active and alert, and layers of abundant eggs especially during winter.

Kulang Chickens is a further classification of the Asil (or Aseel) chicken which is an ancient breed that comes from South Asia or more specifically, India. They are tall and slender but sturdy birds that are kept for entertainment purposes.

Although Kulangs are generally friendly towards humans and have a quiet and docile temperament, they are highly aggressive towards their fellow fowls. In fact, they were used in the Indian subcontinent for cockfighting and are still serving the same purpose in many regions of Asia even today.

If you buy Kulang birds, don’t keep them in close proximity to each other because even their chicks will brawl to the death.

This exceptionally large and robust breed of chicken has a height that towers above most of the other breeds. German Langshan was engineered in Germany and shares ancestry with the Croad Langshan – an old, heavy and soft-feathered chicken breed known to originate from China.

It was exported to different parts of the world but still, the standard-sized German Langshan is uncommon in both the US and the UK although its bantam form might be found relatively easily.

Weighing around 4 kg, these chickens have a contoured back and a single rich red comb. Although they have practical uses (i.e. for egg production and as a meat bird), the German Langshan are normally raised as a show bird only.

Polish Chickens outshine most of the other crested chickens as they are immediately recognizable with their remarkable crest of feathers that covers almost their entire head. But don’t be deceived by their name.

Poland Chickens or Polish Chickens do not really come from Poland. Although their exact origins are unknown, the oldest accounts of this breed come from the Netherlands. Poland Chickens became popular in America after their arrival in the early 19th Century.

This class of chickens is shy in nature but tends to be noisy and flighty at times. Polish Chickens are seldom broody and therefore, usually kept as an exhibition bird only.

Their feathers comprise of an array for hues including white, silver and golden as well as black which is more common than others. Also, they might be bearded or non-bearded.

As is evident by its name, Dutch Bantam is a pure breed of bantam chicken that originated in the Netherlands about 400 years ago. Bantam refers to a small variety of fowl that are about a quarter of the size of the standard breed.

This breed of chickens makes an excellent pet due to their gregarious nature. They lay small white eggs frequently and can survive in different climate conditions.

The lack of ability of chickens to fly has left many people questioning their classification as ‘birds’ but one can see a Dutch Bantam take perfect flight given its physical features.

They have medium sized rich red wattles, silky pale plumage that can also be patterned like that of partridges. Dutch Bantam’s lightweight (only about 15 ounces at most) and small size coupled with large feathery wings mean this bird is going places (quite literally)!

Do you wish to keep an exotic bird in your backyard that leaves your guest awestruck with its exquisiteness? If you are looking for such a chicken breed, then look no further than the Serama.

Serama chickens are also called Malaysian Serama or Ayam Serama because they originated from Malaysia less than 50 years ago. A cross between Malaysian and Japanese bantams, this small type of modern chicken breed is only meant to serve as an ornamental bird.

Passive and meek, Serama makes friends with all visitors. They are prone to cold weather conditions and flourish only in warm regions. Serama hens are frequent layers of small light brown eggs and will thoroughly look after them till they hatch.

As the name suggests, this type of chicken breed features a neck that is naturally devoid of feathers. Known to originate from Transylvania, these chickens were initially called ‘Turken’ from the misconception that the Naked Neck was a hybrid of a turkey and a chicken.

Transylvania Naked Neck chickens might look bizarre in appearance but that’s just the way that they naturally are. These birds are active and friendly and have a calm and quiet temperament. They have a good tolerance for various climate conditions, are low maintenance and do not necessarily need large open spaces to thrive.

Naked Necks have an adequate broody nature that makes them a good choice for egg farming. The eggs have a brown shell but are much larger than those laid by ordinary backyard chickens.

This Mediterranean chicken was initially called ‘Italian’ because they originated from rural Tuscany in central Italy. They became common in the US and UK by the middle of the 19th Century.

Leghorns are mostly plain white in color with a red single comb but some other varieties do exist. For example, some Leghorns have light brown or silvery-white feathers, while some have dark brown or exchequer plumage.

This breed of chickens is very calm and friendly and can easily live in confined areas as well. However, these chickens can be very noisy, assertive and even aggressive at times.

They are not good for meat collection but Leghorns are commonly used in commercial egg production businesses all over the world because they are suited to various climates, are easy to raise, eat very little yet grow quite fast and are great layers of large white eggs.

Jersey Giant is known as the largest chicken breed that originated in the United States. It was bred by John and Thomas Black in around 1870 in New Jersey – hence, the name ‘Jersey’ Giant.

The two brothers wanted to replace the turkey with some other poultry breed as the main meat source at the time. Black Javas, Black Langshans and Dark Brahmas were crossbred to produce the Jersey Giant.

Needless to say, Jersey Giants are huge. The rooster can weigh up to 13 pounds or more when matured while the hens can grow up to 10 pounds as well. This type of chicken breed has a single comb is known to come in black, blue and white color variations while some can also have light brown feathers.

Jersey Giants thrive well in almost all climates, are calm, docile and friendly as well as easy to handle and quiet in nature. These dual-purpose birds are used for both, egg and meat production.

If you hope to collect about 300 eggs per chicken in a year, then Jersey Giants are the right fit for you.

Did so much information fluff your feathers?

Now that you know about the various types of chicken breeds, not only will you be able to make an informed decision, but the next time you pick an egg tray from the grocery store, you will surely wonder which species of chicken did it come from.

We also have information about cows and their various types. Click here to learn more. 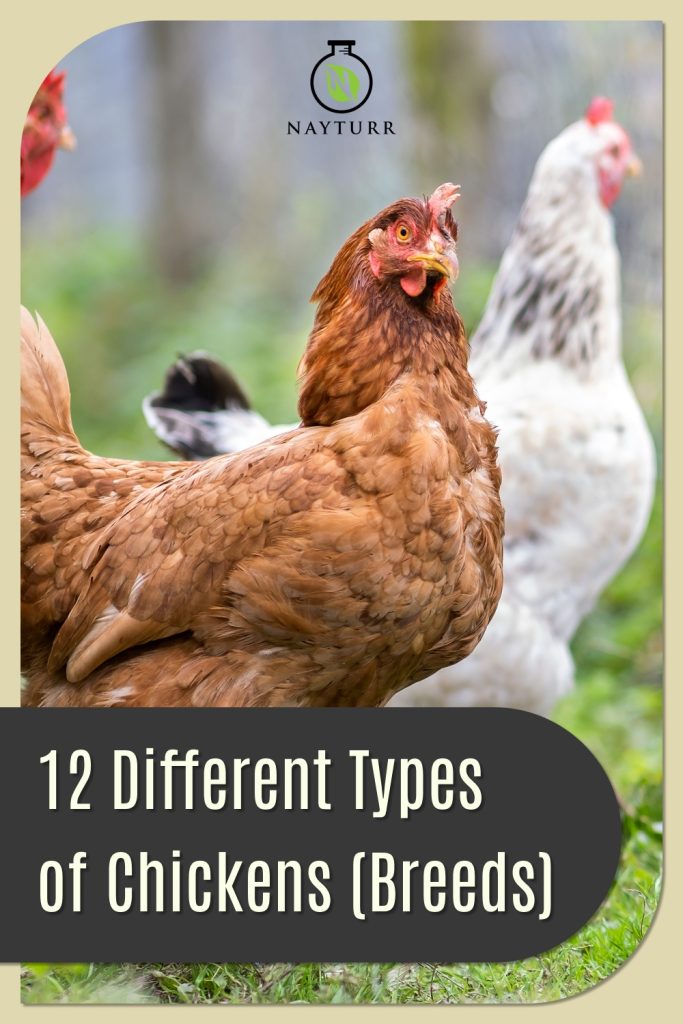