What comes to mind when you think of caves? A dark, creepy place full of bats hanging above? Well, they are much more fascinating and interesting than that. As mystifying as they sound, caves have played an important role in the development of mankind, and continue to demand ongoing, in-depth research.

This increase in curiosity is the direct result of interesting discoveries of sites possessing undeciphered symbols and traces pointing towards ancient civilizations that called these caves their home. And while the role they play in the natural beauty of our world is undeniable, caves continue to be studied for their part in human evolution.

Over the years, archeologists and researchers have come across objects, drawings, and fossils leading to unanswered questions regarding the existence of early humans, many of which have the potential to help re-write our history.

Depending on which part of the world you go about exploring, you’d find different types of caves that are astonishingly different from each other. The scientific study of caves is called Speleology and attracts the extraordinary interest of earth scientists around the globe.

Before we start exploring them in detail, let’s have a look into what exactly are caves. Of course, every hole visible on the surface is not a cave.  A cave is defined as a naturally formed hollow area that extends inside the earth beyond the reach of light and is essentially large enough to allow the entry of a human.

Hence, in order for it is called a cave, three characteristics should essentially hold true:

Caves can be as small as a small room or as big as internal passages extending over very long distances within the surface of the earth, depending on rock types utilized in their formation and the types of geological processes that led to the transformation.

How Are Caves Formed?

Have you ever wondered how caves come into existence? Cave formation is attributed to certain geological, hydrologic and topographic factors that are critical to determining the size and shape of the cave, as well as how and where it appears to develop.

Yet, it is important to note that most of the caves are formed by some sort of natural erosion, including the dissolving of bedrock through erosion by underground water. When water seeps through cracks in rocks, it gradually carves into them and large cave systems ultimately come into existence.

A common misconception is that people tend to differentiate between a cave and a cavern and some describe a cavern as a very large cave. In fact, they are essentially the same.

Ice caves are further classified into two types that are pretty much unrelated to each other.

The first type is formed either as a result of the freezing moisture in cold air currents or when chilly winter air settles into downward-directed glacial openings and cannot free itself.

The second type is formed either when fierce winds and streams hollow out passageways in snowfields or when streams of melting water carve out the snowy surfaces at the bases of glaciers. This forms beautiful caves with transparent, scalloped walls transmitting a blue light.

Sea caves are among the most visually stunning sites that exist on earth. They are formed when powerful oceanic tides attack the weaker cliffs present along the coasts. The shape of a sea cave usually depends on the nature of the weak zone.

The weak zone may constitute a fractured part or fault formed at the time of slippage. Besides this, it may be formed when a softer layer of identical sedimentary rocks collides with harder layers and blends among them.

Additionally, another type of weak zone is formed when different types of rocks, one weaker than the other, blend among each other. This creates a dike, whereby the weaker rock is eroded and is incorporated into the stronger host rock.

The development of a sea cave is normally a gradual process, commencing with a small, narrow crack on coastal cliffs where seawater crashes with tremendous force and penetrates inside, eroding the rock through air compression and the force of the water.

Furthermore, waves carry eroded rock and sand that further exert force on the walls of formed caves, expanding them further.

Among the most popular sites possessing sea, caves include those in New Zealand, which comprise of two of the world’s largest sea caves in terms of both volume and length, namely the Matainaka Cave and the Purple Cathedral.

Other popular caves around the globe are located in the Pacific coastal states of the US, The British Isles, The Na Pali coastal belt of Kauai, the Greek Isles, among others.

Solution caves are formed when groundwater makes its way along passages in rocks, paving way for the formation of a particular type of landscape called Karst.

Primarily, this terrain develops in calcium carbonate or limestone bedrocks, but it may also form sedimentary rocks that are soluble such as rock salt, dolomite or rock gypsum.

The size of the host rock extends from below the water table to the face of the earth. Although it is not always easy to identify solution caves which are often discovered accidentally, certain distinctive karst features are useful in identifying them. Among these, sinkholes are most common.

Sinkholes are depressions that are circular in shape formed by the dissolution of the underlying rock. Other popular clues include natural bridges and disappearing streams.

Karst is produced as a result of the chemical reaction of water, air, soil, and rock. The flowing water fuses with carbon dioxide present in soil and air to generate carbonic acid, thereby making the groundwater acidic.

The water seeps through naturally occurring cracks in the rock and dissolves calcium carbonate in the bedrock.

These fractures lead to the establishment of broad passageways that are further widened and connected to create extensive underground drainage systems. These drainage systems evolve over millions of years into what we now call solution caves.

Yet, it is important to note that some solution caves are also formed by hydrogen sulfide gas that’s released either from the earth’s surface or from organic material when it decays.

As water comes in contact with hydrogen sulfide, it generates sulfuric acid which in turn molds the limestone chemically, paving foundations of a solution cave.

Kentucky, Northern Alabama, Tennessee, Southeastern West Virginia, and other landscapes represent massive solution caves, characterized by most extensive Karst landscapes in the US.

Lava caves, also known as lava tubes are unusual, fragile passageways and spacious formations depicting extraordinary scenery. Not only do they offer opportunities pertaining to scientific research, but also provide highly adaptable habitats for different forms of vegetation and organisms.

Historically, lava caves have served as homes, religious sites and places of burial. Remarkably, they also serve as a source of water supply as it flows through lava tubes to wells, aquifers, and wells.

As the name suggests, lava caves are typically formed by large streams of lava from volcanic eruptions. The silica content in lava determines the viscosity or thickness of the lava flows.

Low-viscosity Lava travels in narrow, fast-moving streams while thicker lava tends to spread out to several miles in the form of broadsheets. At the end of the lava flow, it drains the tube down the hill, leaving a partially empty tube that is identified as a lava cave.

The islands of Hawaii are home to some of the world’s most spectacular and longest Lava caves ever discovered. Two of the deepest lava caves located in these islands include Kazumura Cave and the Huehue cave.

Other lava caves that have been discovered are located at the volcanic hotspots of Canary Islands, Pacific Ocean Islands, Japan, Kenya, Italy, Australia and other parts of the US.

Besides the main types, there are some other lesser known types of caves including Eolian caves, Rock shelters, and Talus Caves. Let’s now explore these briefly.

Eolian caves, also known as wind caves, are characterized by strong air currents that blow in and out of the cave depending upon the changes in atmospheric pressures.

The sandblasting effect of silt or fine blown against a rock face is primarily responsible for the formation of eolian caves. This type is spectacular in size and outnumbers other types that form in deserts.

Most of these are solution caves. An example is the one located in the Wind Cave National Park in South Dakota, US. Another beautiful wind cave located in Sarawak, Malaysia (depicted in the image above) is extremely popular around the world.

Sandstone or Rock Shelters are formed due to the erosion of insoluble rocks, whereby a weaker rock such as shale is overlaid by sandstone. The shale is then worn away by surface weathering or some stream action while the sandstone is left behind as the roof to the rock shelter. These are minor caves but important sites for archeologists.

Finally, Talus caves are extremely small in length and volume and are formed among the boulders that are accumulated on hill slopes. However, some of them do have considerably long interconnected passages among them.

Among the largest talus caves are those developed in granite blocks in New York and New England, where the length of these caves unusually extend to several kilometers.

After reading all of this and when you really think about it, caves are complex formations. They are classified into a variety of types that are significantly different from each other in terms of beauty, size, volume, formation, location and the type of rock involved.

They are prehistoric sites and natural attractions appealing to scientists, archeologists, paleontologists as well as to ordinary travel enthusiasts.

Exploring the different caves around the world has evidently become a hobby of many adventurers too, with spelunking becoming a real phenomenon.

Nonetheless, these sites essentially need to be preserved as more and more of them are being damaged by commercial developments and mining activities and actions of careless visitors.

So, while enjoying these sites for what they are, we should be responsible enough not to pose any harm or destruction to the natural elements at work.

For more information about other natural phenomena around the world, check out our article here. 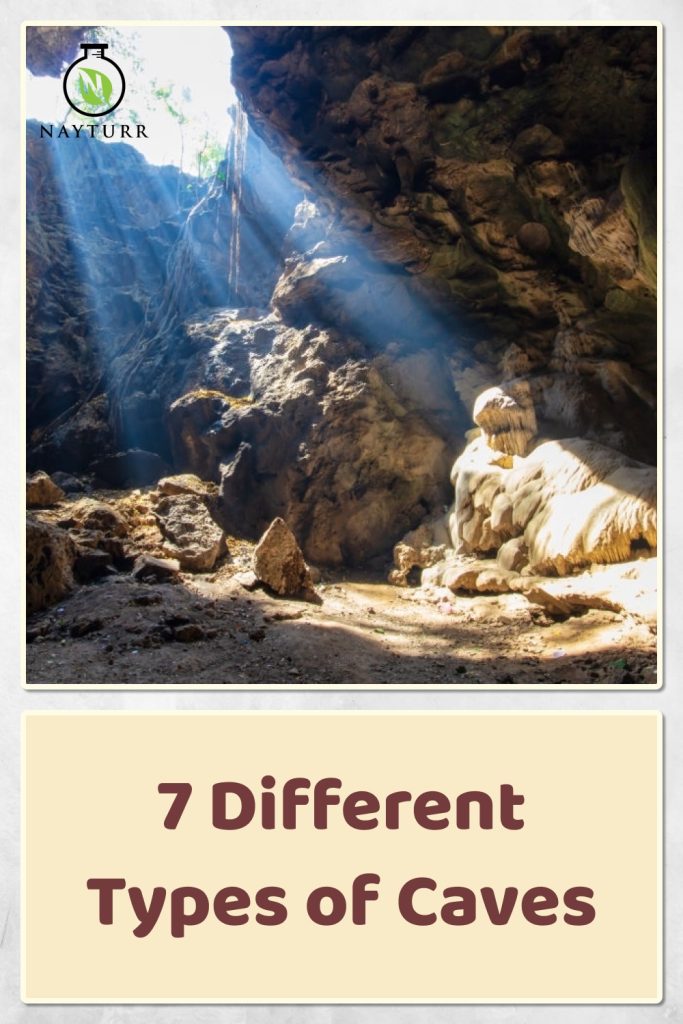