Our planet has vast water sections, both fresh inland pockets and surrounding the continents, and we have oceans. Or seas, but how does one know what differentiates the two bodies of saltwater? They really look the same, taste the same, and cover nearly 71% of the surface of the earth. The oceans and seas hold more than 90% of all water on the planet, so why are they classified as two separate entities? What are the differences between oceans and seas?

The difference between a sea and an ocean is geographic location. Seas are typically smaller than oceans and are partially landlocked or enclosed. Oceans are much larger water bodies and are not confined by any form of land at all. They fully surround continents and are joined by seas through currents.

In many adventure stories of old pirates and Vikings would mention sailing on the seven seas, the rough waters and mermaids that would sing them into a trans and ultimately their demise when they crashed. Tales of the Kraken and colossal sea creatures that destroy ships and sink them into the depths.

While those are fairy tales, there are parts of the seas and oceans that are so dangerous that it is recommended that nobody sails there even with the modern technology and marine vessels we have today.

What Is The Definition Of A Sea?

In the dictionary, the definition of a sea is as follows:

A saltwater body of the second rank more or less landlocked.

Geographically seas are typically located more inland or where the land and the ocean meets. Seas are usually partially enclosed by land. They usually do not have the oceanic motion of waves and are much calmer in some instances.

There is one sea called the Sargasso sea that is not landlocked or partially enclosed by land; it has only ocean currents that define it.

What Is The Definition Of An Ocean?

In the dictionary, a ocean’s definition is as follows:

A great saltwater body covering most of the earth.

Geographically, an ocean typically encircles the continents. It is a far larger body of water than a sea. An ocean cannot be landlocked or partially enclosed. Seas are sometimes parts of oceans that are partially blocked off by a body of land.

What Are The Seven Seas And Five Oceans?

There is a song that reminisces about sailing on the seven seas that are so blue, as mentioned in the tales of tribes of explorers that had to master the art of building boats strong enough to sail on these waters.

They were the pioneer mariners and used the stars to navigate, the workforce of rowers and the wind to get from one mass of land to another, not quite sure of what they were to find. There are, however, not just seven seas but many more.

In the ancient Greek and Hebrew works of literature, the original seas were recorded as follows;

Today, these seas are significant in all trade and industry manners and very busy with commercial shipping routes that crisscross their waters.

In contrast to how early mariners navigated the seas and oceans back then, in modern society, however, we use complex technology to map landmasses, the sea, and ocean floors and to navigate advanced vessels across the water. The oceans mentioned are as follows;

These five significant oceans make up the greatest part of our hydrosphere.

Which Is Deeper – Ocean Or Sea?

The oceans are known for their vast and cold water bodies; they are also some of the deepest pockets of water explored.

There is a place called the Mariana Trench in the Pacific ocean, and it lies on a convergent plate boundary where one of the plates goes into the mantle. The Mariana Trench is the deepest area in all of the explored oceans at 36,200 feet or 10,994 meters deep.

That is deeper than what Mount Everest is high and deeper than the height where most commercial airplanes fly. The average oceanic depth is between 3900 to an average of 15,200 feet deep.

The Caribbean sea is currently considered to be the deepest sea at 22,788 feet. Most seas are much shallower, at around 3000 to 3900 feet deep.

Oceans are deeper than seas.

Which Is Colder – Ocean Or Sea?

Typically the oceans are regarded as being the colder bodies of water. This is because they are much larger and deeper. However, the Arctic ocean is considered to be the coldest and shallowest of the oceans.

The water temperatures never reach below -1.8 degrees C, and this is because salt water freezes at that temperature. The continent temperature of the Arctic can reach a staggering -68 degrees Celcius.

The Atlantic ocean is generally considered one of the colder of all oceans after the Arctic, and its temperatures range between 0 degrees Celcius to around 30 degrees Celcius near the equator.

The Indian Ocean has the warmer waters of the oceans and ranges between 21 and 35 degrees Celcius.

Because the sun does not penetrate the deeper oceans’ water, the first few 100 meters of water will have a warmer temperature. The deeper layers that are sometimes several kilometers thick will be significantly colder. This is why the overall ocean water temperature is only about 4 degrees Celcius or 39 F.

Seas, on the other hand, are much shallower and therefore warmer. In places like the Persian Sea or the Persian Gulf, the surface water temperature can reach around 36 degrees Celcius. That is like a hot bath.

The Mediterranean sea has higher temperatures all year round, ranging between  15 to 21 degrees Celcius or 55 to 66 F.

The Caribbean Sea is the sea’s warmest, with average temperatures ranging between 24 to 27 degrees Celcius or 66 to 75 F.

The Caribbean sea and the Pacific are equally warm.

Which Are The Roughest Seas In The World?

When you watch videos about the deep sea crab fishing expeditions in some seas, it is hard to believe that the ships make it back to land safely. The roughest seas in the world are considered to be;

These waters have been responsible for most of the shipping disasters in the last few decades. King crab fishing is one of the most dangerous activities to do in the world. Usually, in the Alaskan seas,  they have to navigate below freezing temperatures, high waves, and wind.

The most dangerous water body is the Drake Passage in the Atlantic ocean, and it is located between the Shetland Islands of Antarctica and South America’s Cape Horn. The wind constantly blows at speeds of over 88 miles per hour and waves that can top 40 feet. It is called the most powerful convergence of water in the world.

The seas are overall more dangerous waters than oceans.

Which Is Better To Sail On – Ocean Or Sea?

The idea of sailing on vast blue waters exploring the rich animal life, fishing, or simply as an explorer is appealing to many. Sailing is a sport or hobby that demands a lot physically and mentally as you go up against the ocean or seas’ might. Not only that, but all that nature can bring along, like powerful winds, storms, and cyclones.

Massive container ships, fishing vessels, and oil tankers also navigate the oceans and are built to withstand immense stresses on them. However, there are still areas best to be avoided unless you are a very experienced skipper or captain.

There are a few documented places that are considered the most dangerous waters in the world;

Some of the places in this list can even outsmart the most experienced skippers.

Both seas and oceans have saltwater and are fed through various rivers and estuaries that deposit minerals and other nutrients into them. As the most significant water bodies, the oceans have influences on our weather. The ocean and seas both supply a considerable section of the population with food sources and other resources.

The seas and oceans differ in that oceans tend to produce large waves all along their coastlines, and in the mid oceans, waves of up to 40 feet are common. Seas like the Adriatic are calm and don’t make notable waves at all.

The most distinguishable feature of a sea is that it is partially landlocked or enclosed while oceans encircle the continents and islands around the world. 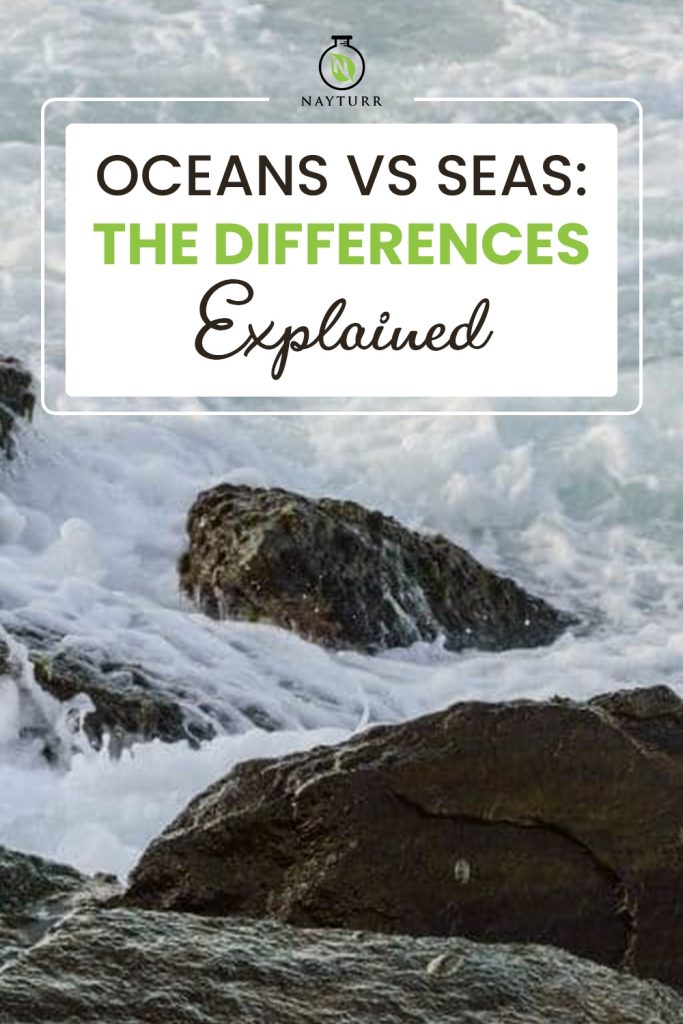