Reptiles are our scaly earth companions, most notably defined by their cold-blooded bodies. They include crocodiles, alligators, snakes, lizards, and more. They all have similarities, but they also have many differences even though they are all classed as reptiles. But is it really true that reptiles can see in the dark?

Reptiles that are nocturnal and are able to see in the dark. Nocturnal reptiles have evolved their eyes to assist them with their night activities. Their pupils are able to dilate to cover almost the entire eye, letting in the maximum amount of light, thus allowing them to see in darkness.

Not all reptiles are nocturnal though, many are diurnal (active during the day) and simply don’t have a need for night vision. Just because an animal is classified as a reptile does not automatically mean that it can see in the dark. There are some reptiles whose eyesight is better than ours in daylight hours and some that even have a third eye, but those that have evolved to see in the darkness are pretty nifty.

How Can Reptiles See In The Dark?

Vertebrates (animals with backbones) all have similar eyes made up of two main types of photoreceptive cells, namely rods and cones. Rods are responsible for detecting amounts of light, while cones allow vertebrates to see color. The configuration of rods and cones in an animal’s eye determines whether their vision is better during daylight or night-time.

Diurnal reptiles generally have more cones in their retina, allowing them to see a rainbow of color during daylight hours. In contrast, many nocturnal reptiles have more rods in their retina, giving them the ability to perceive more light even in low light conditions. Being able to see at night often means reptiles have poor vision in the day and the trade of rods for cones means a relatively colorless world.

With many nocturnal reptiles, their pupil’s shape is vertical versus the usual round pupil of day-dwelling animals. This vertical shape allows the pupil to expand over almost the entire eye in low light, maximizing the amount of light that is let in.

These adaptations allow most nocturnal reptiles to see as clearly in total darkness as we can during the day. However, a few reptiles have come up with even more unique variations to assist with night vision.

How Has The Gecko Adapted To See In The Dark?

Most geckos are nocturnal and can see in the dark. For the nocturnal geckos, their eyes have evolved in a fascinating way, not only enabling them to see at night, but also to be able to discern color in the darkness.

Almut Kelber of Lund University in Sweden is the researcher responsible for discovering that geckos can indeed determine different colors in dim light. The researchers used two African helmet geckos in the experiment.

In dim-lit conditions, the geckos were offered crickets on two different color cards: grey and blue. On the grey card, they placed a cricket dipped in salt, while on the blue card a normal, tasty (for a gecko any way) cricket. The geckos learned to shun the grey card crickets in lieu of the delicious blue card. They were able to distinguish the desirable blue carded cricket from the unpalatable grey one even in dim lighting. This experiment determined that a gecko’s night vision presents them with a night-time world of color.

The researchers determined that gecko color vision is approximately 350 times more sensitive than ours, and their ability to see color in dim light all comes down to some evolutionary magic. The ancestor of the gecko was diurnal and, over time, completely lost all the rod cells in their retinas. They had limited space with small eyes, so their eye became optimized with cone cells to assist them with their daytime activities and survival.

As geckos began to become nocturnal, nature needed to produce a new technique for them to see in the dark without rod cells. Therefore, the cone cells of the gecko began to enlarge and become more light-sensitive, acting in essence like rods, but with the benefit of cones. The end result of this evolutionary genius is a reptile that can discern color in the darkness.

As with other reptiles with night vision, geckos have also adapted their pupil to be vertical and able to dilate. When our pupils dilate in low light, they expand about sixteen times in size. The gecko’s pupil, on the other hand, will expand almost 300 times larger.

Furthermore, the gecko’s eye has developed multifocal lenses to prevent blurring. As the eye of a gecko is small, the focal space is reduced and therefore opening the pupil to such a large size would cause a blurry image. However, their multifocal lenses stop this from happening, allowing them to see clear, crisp, colorful night-time images.

How Has The Crocodile/Alligator Adapted To See In The Dark?

If you have ever seen an ominous picture of a crocodile at night with glowing red eyes resting on the water cusp, you have actually seen one of their most effective night vision adaptations.

Just as with other nocturnal reptiles, the croc and alligator have a vertical pupil that can drastically expand across their eye, but they have another trick up their sleeve. At the back of their eye is a membrane called a Tapetum lucidum. This membrane or plate acts like a mirror reflecting light back into the retina and optimizing the eye for night-time scenarios.

The crocodile has also adapted its color vision to enhance its eyes for night-time hunting. The ancestor of the crocodile lost two of their four color vision channels, leaving the croc with a similar red/green color blindness experienced by some people. The loss of color vision made way for more rod cells allowing them better vision in low light.

The modern crocodile, quite brilliantly, evolved to recapture some of its lost color by repurposing an opsin usually used by the rods and turned it into cones. This has allowed the crocodile to be as formidable during the day as they are at night.

How Has The Snake Adapted To See In The Dark?

Pit Vipers such as the python, boa and rattlesnake are able to “see” in the dark, but not in the traditional way that other nocturnal animals with night vision are able to. The pit viper has a unique adaptation that enables it to see heat signatures, otherwise referred to as infrared.

This infrared vision is made possible by holes in the snake’s face called pit organs. The pit organs contain a membrane that can detect infrared radiation and so the snake is able to conjure an image by detecting heat, not photons of light.

In the dark, the pit organs allow the snake to see heat imagery, just as an infrared camera would. The snake is, therefore, able to hunt its warm-bodied prey in the dead of night.

Other snakes have cones in their retinas calibrated to see Ultra Violet (UV) light. Nocturnal snakes have lenses with no UV filter allowing the maximum amount of UV light in, thus permitting them to see in dim light.

Can Turtles and Tortoises See In The Dark?

Turtles and tortoises are diurnal and very rarely have a reason to be awake at night. For this reason, they do not have night vision like other nocturnal reptiles. However, turtles do come ashore under the safety of night during the breeding season to lay their eggs, and there are occasions where tortoises may need to be mobile in the dark.

They, therefore, have many more rod cells in their retina than humans meaning they have a superior vision to us in the dark. Their vision is definitely not as strong at night as during the day, but they can certainly navigate their way around better than us.

Reptiles are a large group of varied species and being able to see in the dark is not a pre-requisite of belonging to this gang. Even for those nocturnal reptiles that have evolved to be active in the dark, they have not all achieved night vision in the same way.

More rod cells in the retina and a vertical pupil that can expand over most of the eye are the most common night vision adaptations for nocturnal animals to see in the dark. But clever evolutionary tricks such as the gecko’s cones acting like rods or snakes that can see heat makes the way some reptiles can see in the dark pretty eye-opening. 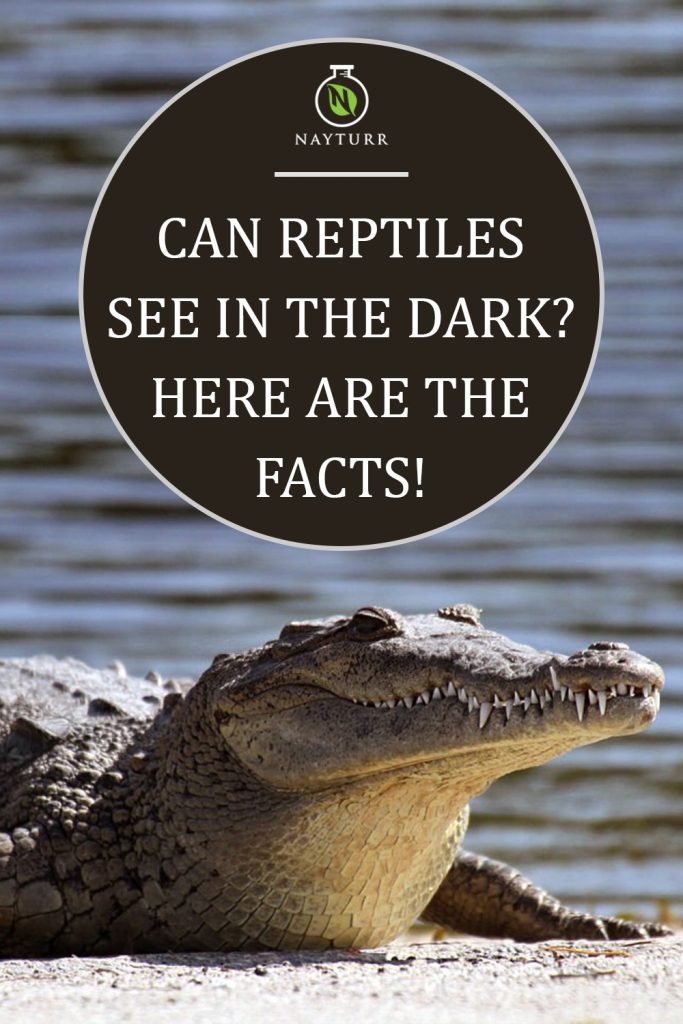