Tropical Rainforests are vital to life on earth. Not only do they contribute immensely to the ecological health of the planet by absorbing greenhouse gasses, but they also provide specific items that are only found in these types of ecosystems, like specific medicine, chocolate, and exotic spices.

A tropical rainforest differs from a jungle in the amount of vegetation that grows on the ground. It has a hot and humid atmosphere with heavy rainfall all year long and a high tree canopy that doesn’t allow sunlight through. A jungle has thick vegetation on the ground and is mostly uninhabitable.

There is a reason why people compare a problematic route in life to a jungle. A forest floor is thick with shrubs and plant life, and the animals are diverse and dangerous, even for the animals. But what makes the tropical rainforest stand out above a jungle? Here are a few points to consider.

What Is The Difference Between A Tropical Rainforest & A Jungle?

There are generally 2 different types of rainforest:

6 Characteristics Of A Rainforest (Fun Facts!)

A tropical rainforest is one of the most diverse and mysterious phenomena on earth. Man is but in the infant stages of discovering all the secrets of this magical ecological wonder.

Here are a few really interesting facts about the rainforest:

Unlike a jungle alive at all its levels, a tropical rainforest has different layers that entertain diverse plant and animal life. Sunlight is only sporadically allowed through the tree crown and hardly reaches the forest floor.

Tropical rainforests have ‘layers’ that make its contents. Let’s learn about them…

The 4 Layers Of A Tropical Rainforest

What Makes A Rainforest Tropical?

Due to there being no dry season, the humidity is constant at approximately 77% to 88%. This results in damp, stifling heat beneficial for particular items we only get in tropical rainforests like rubber, chocolate, bamboo, and certain spices (like cinnamon, turmeric, ginger, paprika, and vanilla).

FUN FACT: Because of the moldy atmosphere and nutrient-poor soil, plant life also provided particular medicine only found in the tropical rainforest due to unique fungi and flora.

What Is A Jungle?

A jungle is a thick tropical forest filled with animal and plant life. At the edges of the rainforests, where the sun’s rays are allowed to shine through, the sunlight reaches the ground and lets dense shrubs and plants grow.

Many would consider a jungle too dangerous to explore with its compact vines and scary animals, but as long as you prepare yourself for the hike, you should be able to wade your path through. (Learn about the Top 10 Most Dangerous Jungle Plants in my article here)

Is The Tropical Rainforest Considered A Jungle?

Even though the tropical rainforest and the jungle have the same type of weather, they’re similarly located near the equatorial belt, and they share heavy rainfalls, they are not quite the same.

The jungle has fewer trees, making its canopy open and sparse and allowing the sun to reach the forest floor and feed plants that grow close to the ground. The tropical rainforest experiences heavier rainfall and a stuffy, humid atmosphere unique to its ecosystem. Where the jungle air cools down during the night and early morning, the tropical rainforest does not.

Animals in the Jungle vs Rainforest

The majority of the lions are living in the grasslands, savannahs, or open woodlands. They are king mainly because of their fearlessness towards other animals, including those in the jungles.

The animal species also identifies the difference in the jungle vs rainforest dwellers. The jungle is littered with animals on its floor. It includes insects, rodents, reptiles, and amphibians. Large animals like the jaguar, leopard, and other mammals live in the jungle too.

Meanwhile, the rainforest houses thousand more species of animals in its canopy and emergent layers. It includes birds and arboreal or tree-living creatures like sloths and monkeys.

Check out our article, “Top 10 Dangerous Jungle Plants you Should Know”

5 Of The Biggest Tropical Rainforests Today

The biggest of these is found in The Amazon, which stretches over nine countries and envelopes about 40% of South America, about 2,124,000 square miles (or 5,500,000 square km). The majority of The Amazon is found in Brazil, Peru, Colombia, Venezuela, Ecuador, and Bolivia. The Amazon represents over half of the remaining rainforests globally.

Another amazing tropical rainforest is the Congolese rainforest, situated over six countries like Cameroon, Gabon, Republic of Congo, and Equatorial Guinea with about 772,000 square miles (2,000,000 square km). The second biggest rainforest in the world claims home to a traditional tribal people called Pygmies, who are very short in stature; rarely taller than 5 feet (1.5 m).

This section of Rwanda, Uganda, and the Democratic Republic of Congo is also known to be the home of the highest population of eastern lowland gorillas. Only about 600 of these species are left on earth today.

A much smaller tropical rainforest is the New Guinea rainforest that ranges over Indonesia and Papua New Guinea and reaches the width of about 111,200 square miles (or 288,000 square km). It boasts of being the largest rainforest in the Asia-Pacific region.

This rainforest has the most diverse orchid varieties, and two-thirds of the plant life is endemic, meaning that it is only found there. Twenty-four of this region’s bird species are under threat of extinction, and one of the world’s only known poisonous birds inhabits this rainforest.

The fourth-largest tropical rainforest is the Heart of Borneo, which ranges from 85,000 (220,000 square km) and covers countries like Indonesia, Malaysia, and Brunei, Asia’s last great rainforest.

Borneo is a biodiverse home of approximately 15,000 plant species, including the biggest flower in the world, the Rafflesia Arnoldii flower. The flower is told to smell like rotten carcasses, aptly also named the corpse flower. There are only between 55,000 and 65,000 wild orangutan primates left globally, and they only live in this rainforest habitat.

Lastly, in southeastern Asia, in Indonesia, is the Island of Sumatra, where you will find the lowland tropical rainforest, which is currently one of the most threatened in the world. The island is roughly 9,650 square miles (25,000 square km) big and covered with rainforests from coast to coast. But due to illegal logging and palm oil production, there are mere pockets of rainforest still in existence, and the survival of this tiny rainforest and its plant and animal inhabitants depend on the conservation of the remaining parts.

5 Jungles Of The World

Like the tropical rainforests, there are numerous examples of the rarest and protected jungles globally—each with its characteristics.

In Sri Lanka, you will find the Sinharaja Forest Reserve that withstood millions of deforestation years. Dozens of villages are situated along the border and depend on the edible fruits, nuts, mushrooms, and herbal medicine for their survival.

This forest encompasses a range of about 88,960 acres (360 square km) but occupies a multitude of endemic trees, insects, amphibians, reptiles, birds, and mammals. It is still a significant eco-tourism destination for Sri Lanka, and many campaigns have been undertaken to protect this biodiverse hotspot.

Due to the dense forest of tall bamboo and the ground covered with thick ferns, vines, and other plants, the Bwindi Impenetrable Forest in Uganda earned its name because it is nearly inaccessible to enter on foot. As it hems the Congolese Tropical Rainforest, it also shares residence rights to the endangered mountain gorillas.

The Daintree Forest is located on the northeast coast of Queensland, Australia, and even contains white, sandy beaches inside its borders. This jungle is over 180 million years old, with an array of animals, insects, and prehistoric plants. You are welcome to explore by hiking through the various walking tracks built through it.

It hosts a variety of towns to explore as well as butterfly sanctuaries. Among the most dangerous creatures occupying this jungle, you should look out for crocodiles, snakes, ticks, and the potent Box Jellyfish, whose venom attacks the cardiovascular system and causes the swimmer to drown before reaching land.

The Manu National Park Forest is situated in the southern parts of Peru, ranges roughly the area of 6,630 square miles (17,163 square km), and borders the Amazon Rainforest. The most famous section of this jungle is the Cloud Forest which reaches altitudes of about 4,000 m above sea level and plays host to Peru’s national bird, the Andean cock-of-the-rock. In 1967 the national park was established to promote the protection of the local flora and fauna.

Lastly, but not the only, is the Kanha National Park in India with its rich bamboo forests and extensive grasslands, home to the Kanha Tiger Reserve. It hosts, among other animals, the Royal Bengal tigers and Indian Leopards within the borders of its 363 square miles (940 square km). This picturesque forest is the inspiration of the well-known novel, “The Jungle Book.”

Many people mistake a jungle for a rainforest. Even though all tropical rainforests are jungles, not all jungles are rainforests.

The most distinguishable fact is that the tropical rainforest’s canopy is closed and blocks out the sun. And because the sun cannot reach the forest floor, hardly any plant life can withstand the dark heat and musty air.

However, the jungle floor is uninhabitable and dense with vegetation, making it difficult for any human being to trek through it. 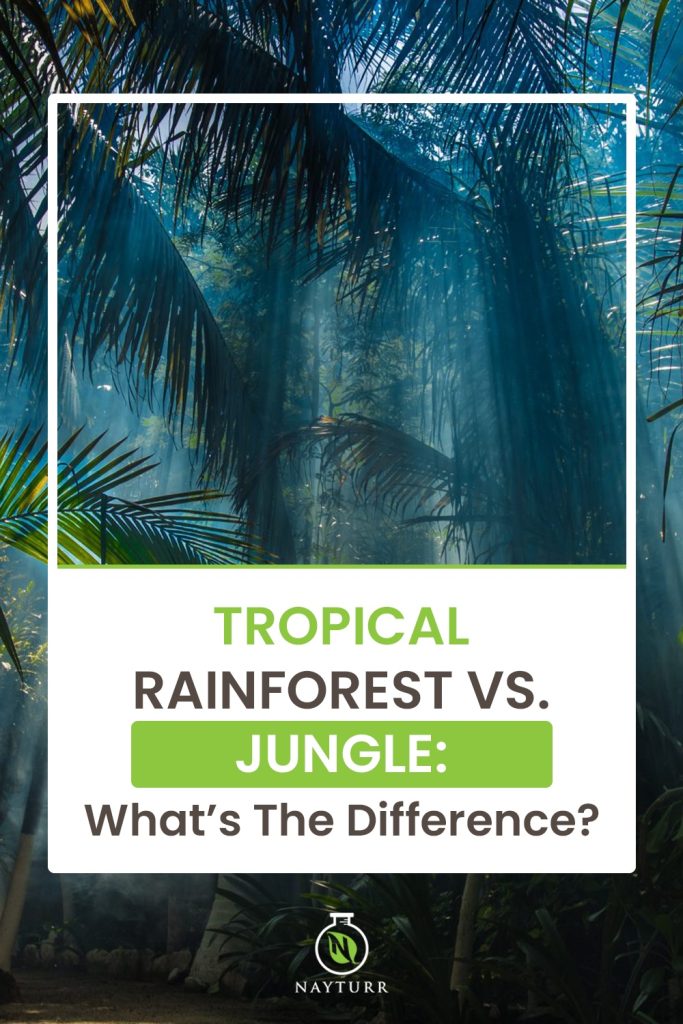