One of Mother Nature’s most mysterious phenomena is the fusing of different trees and how they not only continue growing but, in fact, thrive together in a kind of symbiotic relationship that slowly stretches over hundreds of years.  Studies have shown that they work together and feed each other to create a beneficial ecosystem for the entire collective.

Trees of similar or different species can fuse and grow together, either by natural proclivity or human intervention. The anomaly is called inosculation, whereby the trunks, branches, or roots of trees fuse and start growing as one organism.

Arborists over centuries have been amazed at how trees and shrubs can start as different entities and create one living plant by fusing their barks or roots and becoming a single green body. A plant with no brain capacity is regenerating and growing together with another organism. How about we investigate the phenomenon a little more?

Can Two Trees Grow Together?

The miracle of inosculation occurs when the trunks, branches, or roots from different seedlings or trees become fused into each other and start growing as one unit. This happens most commonly between trees of the same species but has been known to occur between related species of plants and vines.

Ordinarily, people have been using the art of pleaching or braiding tree limbs together to create, for example, a living fence for their property.

There are a few typical types of trees that can naturally fuse thanks to their thin barks. They are trees like:

Different species of trees like fruit and citrus varieties are also compatible and can easily be grafted together. Ordinarily, any tree can be coupled if there exists a cambial layer in the bark.

How Would You Fuse Trees?

Generally, the branches of different saplings grow together and close to each other. The bark of two different greeneries becomes bare through natural friction, and the cambium tissue becomes exposed. The cambium is the layer of the tree where new cells are created during growth season.

The plants then self-graft and begin growing together, increasing their thickness and width through time. This is a practice frequently used among bonsai enthusiasts to make the trunk appear thicker, multiply the branches, or add increased root systems to their bonsai tree.

QUICK TIP: The best time to try and fuse branches is during the slow-growth period when it’s cold, like winter or early spring.

What Is The Cambium?

The cambium layer of a plant is the layer of tissue responsible for the secondary growth of plants.

The secondary growth occurs after a plant’s second season when they increase in diameter. We find this layer in between the central axis of the stem and the phloem cells that carry food for the plant.

The bark is practically dead tissue, covering the stem on the outside and protecting the inner layers. It is in the cambial zone where new cells are created and where the fusing of cells with another branch ensues. They eventually merge into one unit and start growing together

How Long Does It Take For Trees To Fuse Together?

Grafting may not always succeed, like in cases where the cambiums do not touch properly and they aren’t allowed to merge well, or if the scions aren’t allowed to graft when they’re in their dormant stages. Occasionally also when the species are incompatible, they will fail to fuse.

However, when the process does work, a graft can take about 12-18 months to grow and fuse into each. After this time, the binding tape or wire can be removed to inspect the progress but reapplied.

Gradually the tree or shrub will fuse into a unified organism growing together and shaping its branches into a much denser plant.

Is It Bad For Trees To Grow Into Each Other?

Not only is it better, but it has been found that similar trees in a forest that fuse and grow together actually help each other and create a kind of network where the strongest trees provide for the weakest.

Branches collectively grow into spaces where there is more sunlight and create a cramped canopy protecting the ecosystem below, maintaining the cool, moist climate in their environment. The trees enclose the network by stretching their branches into the open patches to avoid sunlight shining through.

If a tree should struggle, they share nutrients and sugars from another stronger tree next to them. It is in their joined interest for all the individual trees to do well.

Plants have no brain, no nerve endings, and no pain receptors. The obvious answer would be that they don’t feel pain. However, plants do feel sensations. They can identify a touch as light as an insect walking on its leaf.

But if the question changes to can a plant be wounded, the answer is definitely yes. If it becomes damaged, it sends electrical signals and reacts the same as we do. It responds with decay, discoloration, or even death.

What Are The Advantages Of Fusing Trees Together?

The most common use for grafting trees together is to repair damaged parts of the plants. It’s done by fusing a young bud or scion with another part called the stock. The outer layer of the stock is scraped away to reveal the plant’s cambium and bound to the scion. Over time the stock will provide nutrients to the bud, and the two parts will regenerate onto each other.

The fusion of different species of trees also has numerous benefits, like when growing fruit. Various species can be grafted together to create multiple or specialized types of fruit. An example of this is creating the Granny Smith apple that only grows from the grafting of dwarf trees.

Agriculturists can even engineer specific plants to create specialized attributes such as resistance to certain bacteria, becoming seedless, or being cold resistant.

The 7 Steps To Fuse A Fruit Tree

Here are some simple steps to fuse a fruit tree together…

There are so many examples of trees being revered and cherished in society, where trees are given sacred meaning or where the tree is a symbol of worship. In many folklore, trees are supposed to be inhabited by tree spirits, making them divine to their people.

Because trees lend so much meaning to our history and religious traditions, they are honored and treasured. They are tended to and cared for like a very old friend. It has become a valued process to fuse and graft a broken tree together rather than let it die. The holy significance is worth the tedious effort and patience to mend the broken sapling.

Is Tree Shaping An Art Or A Science?

From paintings and literature, it is clear that tree shaping has been practiced as far back as the sixteenth century. Objects have inspired people to use the science of inosculation as an art form. By carefully manipulating and pruning the limbs of neighboring trees, they create an object with interweaves of knots and loops, creating a vision of artistry.

A popular application of this craft is living furniture, incorporating foreign materials (called espalier) to create urban designs for furnishings and housing and landscape architecture. Another beloved example of tree shaping is the creation and culturing of bonsai trees. Some people believe it to be a type of meditation. Others simply employ it as a method of decoration.

NOTE: If you’d like to know more about taking care of bonsai trees, check out my articles “How to Take Care of Juniper Bonsai” and “5 Species that Make Great Indoor Bonsai“

What Happens When You Plant Two Trees In One Hole?

Another tactic used by orchardists is to plant numerous trees in the same hole, but it requires high maintenance and specialized knowledge to do it correctly. They live in the same local habitat and battle for the same resources and nutrients from the ground they reside in.

They can suffer from too little circulation, and they are more vulnerable to each other’s pests and diseases. Their roots could become entangled, and they could limit each other’s growth protentional and threaten their health and how speedily they might grow.

However, they tend to naturally inosculate through the scraping together of their branches in the wind, which results in the blending of their attributes, creating more mixed fruit. If you want to avoid this, professionals recommend that you plant your trees at least ten feet apart to grant them enough freedom to grow independently.

What Are Conjoined Trees?

Trees can also grow to full adult size adjacent to each other without ever grafting together. In these cases, they are simply known as conjoined trees. They might have never been close enough to be able to splice together, but they have grown in unison as a pair, though separately.

These trees are commonly known as husband-and-wife or marriage trees and can occur among coniferous (cone-bearing trees with needles as leaves) and deciduous trees (trees whose leaves change color through the seasons).

The Most Famous Examples Of Conjoined Trees.

In a town called Inveraray in Scotland stands a lime tree that seems to have two trunks. The one appears to have stretched out and put his arm around the other, and the natives fondly refer to them as the marriage tree.

You will find a pair of husband-and-wife trees in the Jade Mountain in Taiwan, which people colloquially refer to as the Fuqi Tree. About fifty years ago, both cedar trees were destroyed in a forest fire, and most recently, in 2017, the larger of the two (the husband tree) were unearthed by heavy rains and fell over.

And at the entrance to Chrome Hill in Lambeg, Ireland, stands two beech trees dating back to the eighteenth century. While John Wesley was staying in this region, he took it upon himself to weave the two infant trees together to grow as a connected unit.

Wesley was a leader in the revival movement in the church of England during this time and meant for the conjoined trees to represent the solidarity between the Methodist Church and the Church of Ireland.

Why Do Some Trees Split In Two?

The bark of a tree, especially if it’s a few centuries old, may be susceptible to splitting. The fluctuating weather conditions urge irregular growth spurts or dry and wet seasons alternate too rapidly, and the bark splits. Broken or injured branches can be pruned and cut back, but after some healing time, the process of inosculation can be viable.

The exposed barks can be joined together and held in place. Gradually the trunk sections will reestablish a connection, grow together and heal. The main requirements are time and patience and the longing to allow the tree to grow into the desired design.

Fusion is an easy procedure to improve the life of your trees. It occurs when the cambium tissue of one tree is exposed to the cambium of another tree and naturally starts to grow together and form a new plant, helping each other grow and flourish. Together they regenerate and form one organism.

Check out more of our articles about trees: 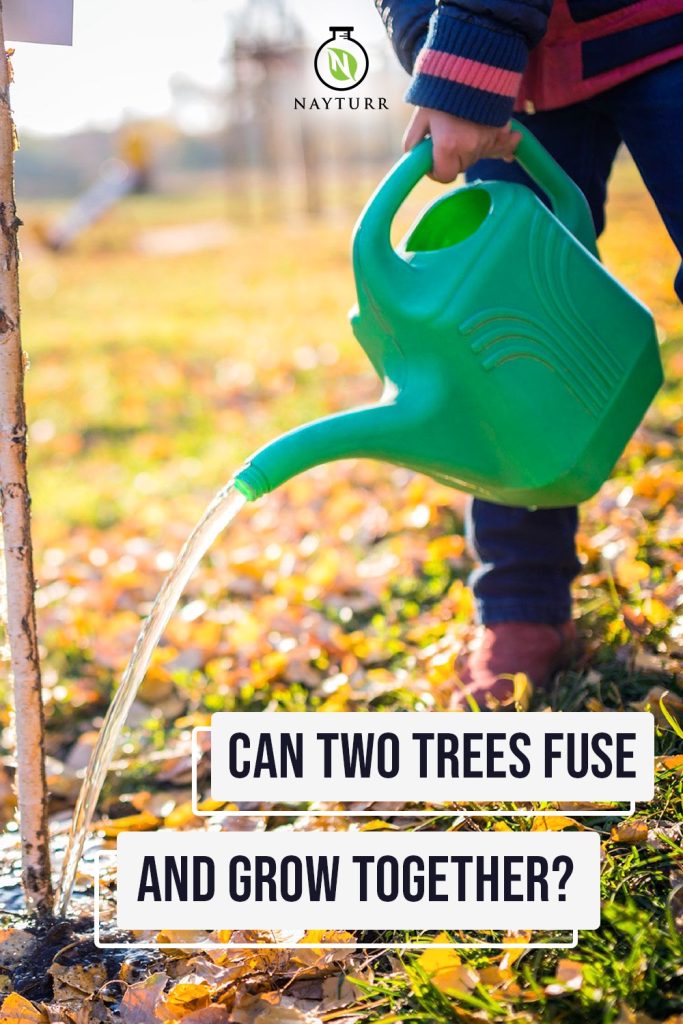