Dinosaurs were built for the kill. At least the carnivorous types were. Heavily armored with razor-sharp teeth, claws, and spiked tails. There is no doubt some of these creatures were definitely apex predators. Speculation on which dinosaurs preyed on which has always been of interest to scientist and dino fans alike. One wonders, could a spinosaurus kill a megalodon?

The Spinosaurus & Megalodon lived in different periods, making the chances of them meeting seemingly impossible. However, based on what we currently know about these creatures’ biology & physiology, a Spinosaurus would have a difficult time killing a Megalodon. But the opposite may have been true had they met in water.

To better understand this scenario and the reasoning behind the projected result of a fight between these creatures, we will discuss their various biologies and physiologies. This will help us understand and better formulate an approximation of a physical engagement between these two different dinosaur species. We will also discuss their natural environments, hunting strategies, and weapons of choice.

Spinosauri were amongst the largest species of dinosaurs to roam the earth. Its size was comparable and larger than that of the Tyrannosaurus. They had large vertical neural spines that grew along their back vertebrae, for which they were named. These spines were slightly longer from the front towards the back. The function is disputed, with some scientists theorizing that it was more hump-like than sail-like. This would indicate another purpose like aquatic locomotion rather than thermoregulation.

The spinosaurus lived in North Africa in the late Cretaceous period, between 99 and 93 million years ago. Its remains or fossils were first discovered in Egypt by a German paleontologist named Ernst Stromer in 1912. Spinosauri were semi-aquatic dinosaurs that lived in humid environments, such as mangrove forests, swamps, and tidal flats. Spinosauri were amongst the largest species of dinosaurs to roam the earth at the time. Its size was comparable and larger than that of the Tyrannosaurus.

Spinosauri is estimated to be 12 to 18 meters or 41 to 59 feet in length. It could weigh approximately 7 to 23 tons or 14000 to 46000 pounds. Its skull was crocodilian in form, with conical unserrated teeth. The bite force of spinosauri is estimated to be around 19613 newtons, 2 tonnes or  4409 pounds-force.  It had large forelimbs with ended in three-fingered hand-like appendages, of which only the first finger had a long and large claw attached. It had a long narrow tail with tall spines and haemal arches that formed a paddle-like appendage that it used to swim. Its hind legs were short in proportion to its body, with the hips reduced. This suggests that the spinosaurus move close to the ground.

However, the spinosaurus was an opportunistic predator. This meant that it fed on any animals that might have come within reach. The reasoning behind this is due to a tooth from a spinosaurus found within the remains of a pterosaur. Below we will discuss some of the other dinosaurs that the spinosaurus preyed and fed upon, such as sharks, Mawsonia, and Iguanodon.

Megalodons lived around 23 to 3.6 years ago and were the apex predator of the oceans at the time. They are often mistakenly referenced as relatives of the great white sharks we encounter today.

However, these extinct species of shark belong to their own family of sharks called Otodus, which diverged from the great white shark species. They were similar in appearance to the great white sharks but with blunter and wider jaws. The fins were more robust, and the body larger and thicker in diameter.

The megalodons lived in various oceans worldwide, from Europe, Africa, North and South America, and Australia. Most of their fossils, however, have been found in subtropical to temperate climates. They inhabited shallow coastal waters, swampy lagoons, and deepwater environments. This means that they could regulate their body temperatures to endure lower temperatures. It is estimated that megalodons could live in temperature ranges from 1-24°C or 34-75°F.

Megalodons are often referred to as leviathans in myths and stories. There is a good reason for this. These sharks’ female species are estimated to have reached up to 17 meters or 56 feet in length and weighed up to 59.4 metric tons or 65.5 short tons, and could move at 18 km/h or 11mph underwater.

The megalodons’ diets ranged from whales, giant squids, dolphins, sharks, seals, and turtles. The megalodon’s hunting strategy changed depending on the size of its prey. For bigger prey like whales, the megalodons would target the whales’ hearts or lungs while swimming at great speeds.

Prey that exceeded the megalodon’s size would be immobilized through the removal of appendages such as tails, fins, and flippers. Smaller prey was eaten whole or shredded and eaten. Megalodons hunted close to shore when young and further offshore as they matured to engage larger prey such as whales.

Based on the current information we have, it is inconceivable that a spinosaurus would be able to kill a megalodon under normal circumstances. Physical engagement requirements between the two species rely heavily upon the fact that the spinosaurus would be submerged in relatively deep water.

This ensures that the favor for victory lies almost always with the megalodon.  It is also unlikely that the spinosaurus would be able to use its tail or claws to inflict any substantial damage to the megalodon while in water. Below we detail three possible scenarios. 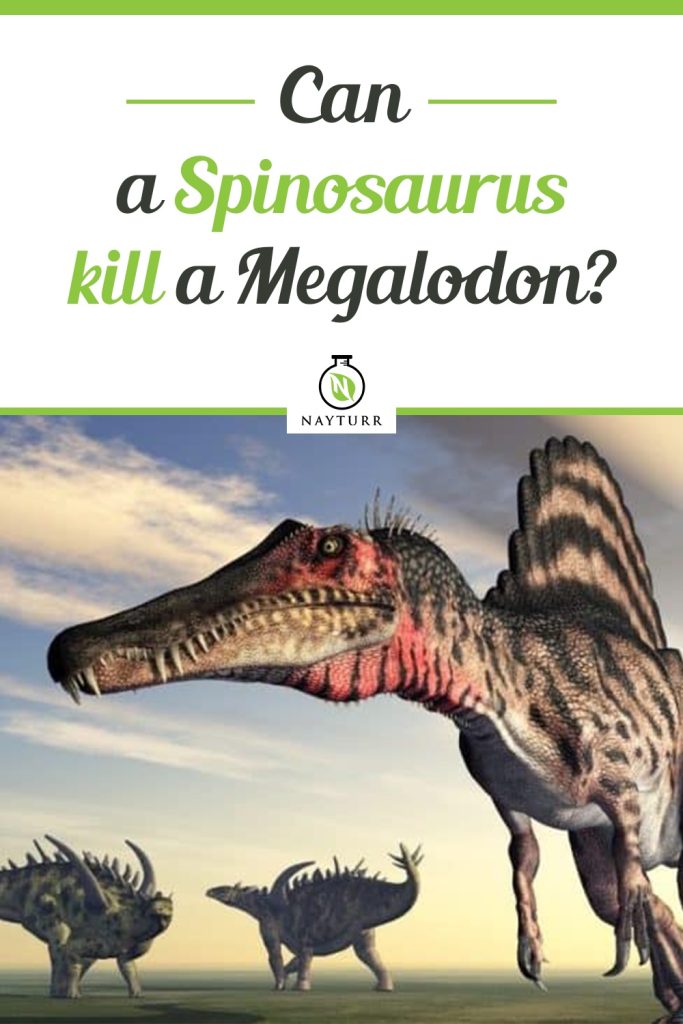