In our solar system, there are four planets that are made out of gas. These planets are called the Gas Giants. Another name for these is the Jovian planets (Jove is Jupiter’s Latin name). Astronomers have also discovered planets outside of our solar system. These are known as exoplanets. Some of these exoplanets are made out of gas, but we know less about them than we do about our Gas Giants.

This article will give you information and detail about our solar systems amazing Gas Giants but also gives information on some of the better-known gaseous exoplanets. Let’s take a look at them…

How Did Jupiter Get Its Name?

In ancient Roman mythology, the king of the gods was named Jupiter. As Jupiter is the largest planet in our solar system, astronomers decided it was fitting to name it after this Roman god king.

Features And Facts About Jupiter

Jupiter is composed mainly of two elements. These are hydrogen and helium, which are gases. This is how Jupiter became known as a Gas Giant.

While Jupiter’s atmosphere may be gaseous, this is not true for the deeper regions of the planet. Here, the pressures exerted by the vast mass of Jupiter actually compress the hydrogen and helium gases into a liquid state.

Jupiter has a dense core. This may be made up of solid rocks and ice, or it could be a thick liquid, and it is surrounded by a thick layer of liquid hydrogen and helium, accounting for 80-90% of the entire planet’s diameter.

Then the gaseous outer layers of Jupiter form bands as the gas clouds are moved along the East-West axis by powerful winds. These bands are different colors because they contain different substances (although they are mainly hydrogen and helium).

As we discovered in 1979, Jupiter also has rings—three of them—but they are very hard to see, despite their size. The main ring is 4,000 miles wide, although it is flat (20 miles thick). The middle halo ring is 12,000 miles thick. The gossamer ring (it’s actually made up of 3 separate rings) is 61,400 miles wide but almost transparent.

Jupiter probably has over 79 moons, although only 58 of these have been confirmed and named.

If you are in the market for a new party trick, you can memorize all of these names. But mostly, people just talk about Jupiter’s four largest moons: Io, Europa, Ganymede, and Callisto. According to NASA, all of these moons hold a title in our solar system. These titles make these moons more scientifically relevant than the others.

How Did Saturn Get Its Name?

Saturn was also named after an ancient Roman god. In fact, all of our planets, with the exception of Earth, are named after ancient mythical gods. Saturnus is the name given to the Roman god of agriculture and the harvest.

Features And Facts About Saturn

Saturn has only about 95 times greater mass than the Earth, despite being so much bigger. This is because Saturn has a very low density—less than water. According to NASA, Saturn “could float in a bathtub if such a colossal thing existed”.

However, in 1610, with telescopic technology at his disposal, Galileo Galilei is also credited with being the first person to detail Saturn and discover its rings.

Saturn is also composed of mostly hydrogen and helium. It has a dense, rocky, and metallic core surrounded by liquid hydrogen, which is formed by the extreme pressures deeper within Saturn. The outer layers of the planet are gaseous hydrogen and helium, with small amounts of other elements, which create the banded appearance of Saturn’s surface.

Saturn’s rings are phenomenal. They look solid in the images we are accustomed to seeing, but they are actually composed of rock and ice, ranging from the size of dust particles to the size of houses, and a few even larger than that.

Saturn has seven rings. Moving from the outer rings inward, these are E ring, G ring, F ring, A ring, B ring, C ring, and D ring. This may seem like a nonsensical naming system, but the rings were named alphabetically according to when they were discovered. Between A ring and B ring, there is a gap known as the Cassini Division, which extends 2,920 miles.

The rings are only approximately 30 feet thick, a tiny measurement in astronomical terms. However, the whole ring system is 262,670 miles wide. That’s over 3.5 times wider than Saturn itself!

Saturn has even more moons than Jupiter! There are 53 officially named moons and another 29 still waiting to be confirmed and named.

If you’re looking for a good baby name, look no further! Just kidding. But with all of these moons, only two are of significant scientific relevance: Enceladus and Titan.

While we can speculate at frozen, subterranean oceans on other astrological objects, you can see these clearly on the surface of Enceladus. From samples collected by spacecraft, astronomers believe that Enceladus may just have most of the chemical requirements to support life. Enceladus also holds the title of being the “most reflective surface in the solar system”.

Titan is the largest of Saturn’s moons, but that’s not what makes it intriguing to scientists. Titan is under the microscope because of its similarities to Earth and what this could mean. Titan has a substantial atmosphere and liquid rivers, lakes, and seas on its surface. Is there life on Titan? Or could there be?

How Did Uranus Get Its Name?

Uranus is the Latinized name for the ancient Greek god Ouranos, the god of the sky, possibly because of the planet’s blue color. This was in keeping with the tradition of naming our solar system’s planets after mythical gods. But Uranus was almost not called Uranus.

The man who discovered this planet wanted to name it after the reigning monarch of the time, King George III. If he had his way, Uranus would be called Georgium Sidus. Eventually, however, Johann Bode came up with the name Uranus.

Features And Facts About Uranus

The rotation of Uranus is slower than that of Jupiter and Saturn, but it is still faster than Earth. A single day on Uranus only lasts about 17 hours and 14 minutes. Uranus’s rotation is interesting for two reasons.

The first is that it rotates sideways with a spin axis of almost 90 degrees to the planet’s equator. This means that there are extreme seasonal changes. According to NASA, “For nearly a quarter of each Uranian year, the sun shines directly over each pole, plunging the other half of the planet into a 21-[Earth]year-long, dark winter”.

The other notable rotational feature of Uranus is that it spins in the opposite direction to most other planets.

These two factors indicate that something massive must have collided with Uranus at some point in its life.

80+% of Uranus is made up of water, methane, and ammonia, which NASA paradoxically describes as being icy materials that form a hot, dense fluid. Its core is small and rocky.

The absorption of red visible light by the methane gas of Uranus is what gives it its green-blue color.

Uranus has 27 moons, and they are called the literary moons because they were all named after literary characters, specifically those featured in the works of William Shakespeare and Alexander Pope.

How Did Neptune Get Its Name?

Due to its vivid blue color, Neptune is named after the ancient Roman god of the sea.

Features And Facts About Neptune

Neptune is almost identical in composition to Uranus, but it is the densest of all the Gas Giants.

Neptune has five primary rings. From outermost to innermost, these rings are Adams, Arago, Lassell, Leverrier, and Galle.

In addition to these rings, Neptune has four arcs: Liberté, Egalité, Fraternité, and Courage. These arcs are clumps of dust, and scientists believe that they are held in orbit by the gravitational field of Galatea, one of Neptune’s moons.

Neptune has only 14 moons, which were all named after lesser sea gods and nymphs to carry on the Neptune theme.

51 Pegasi b is the name given to the first exoplanet discovered to be orbiting a sun-like star. It was discovered in 1995, and it orbits its star much closer than any of our solar system’s gas planets do. In fact, it is so close to its parent star that it only takes 4.2 days to complete one orbit.

KELT-9 b is another gaseous exoplanet, and it was only discovered in 2017. It, too, orbits its parent star closely, taking only 1.5 days to complete an orbit.

Kepler-7 b is a Gas Giant exoplanet that was discovered in 2009. It completes one orbit around its parent star in 4.9 days.

There are four Gas Giant planets in our solar system: Jupiter, Saturn, Uranus, and Neptune. We know quite a bit about these planets, although there are still plenty of mysteries surrounding them. Then there are also gas planets outside of our solar system. In the last few decades, these exoplanets have been discovered, but little is known about them thus far. 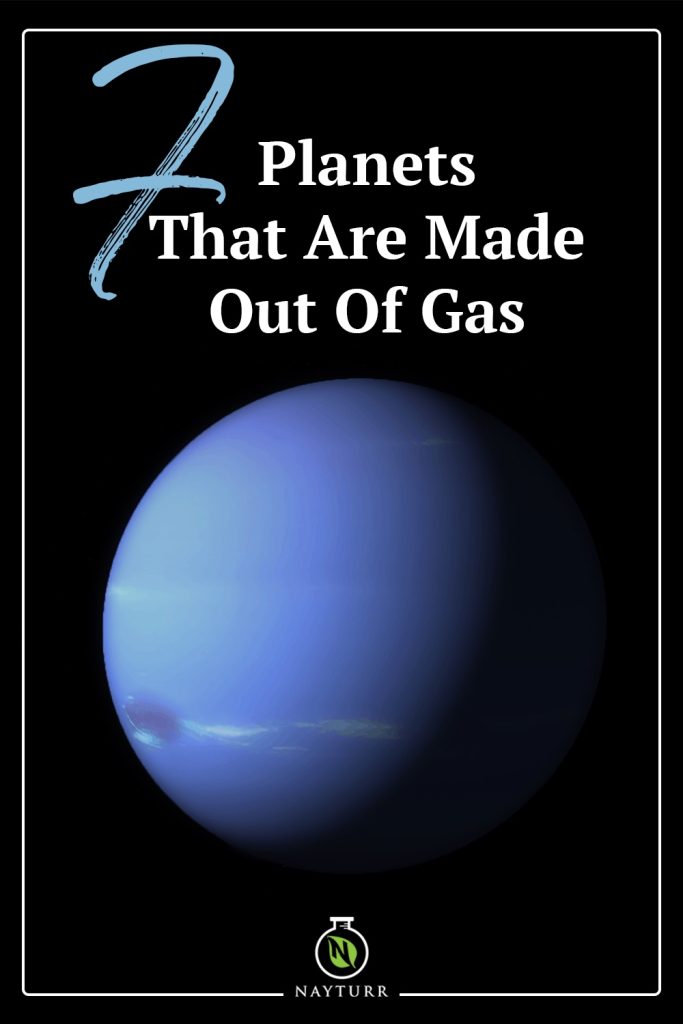