Animals come in all different shapes and sizes, some have tails, and others have no tails. Some animals have very long tails, whereas others have very short tails. Today, I will cover 10 animals with the longest tails.

The 10 animals with the longest tails of all are:

Here’s a table showing the animals with the longest tail and the ratio. I ordered them from the biggest difference between their tail length and body.

It’s interesting to note that even the animals above that have a tail that is the same length as their body look like they have a REALLY long tail. Here’s a breakdown of these animals and what they use their long tail for.

With a relatively small body, the thresher shark’s tail is only very long on the top fin. Their tail is a long thin triangle with a pointy tip, whereas the bottom fin of their tail is a standard length for sharks.

Tail-to-Body Ratio: A common thresher shark’s tail is the same length as its body and has a tail-to-body ratio of 1:1. Therefore, half the length of a thresher shark is in its tail.

Thresher sharks use their very long tail for hunting. Sharks commonly feed on fish, which are often very difficult to catch, especially when they are in a big school making it difficult for a shark and other predator fish to decide which fish to go after.

A thresher shark swims up as fast as it can to where a group of fish is, then stops suddenly and whips its long tail over its head to stun and kill as many fish as possible. It then gobbles up any fish it managed to hit.

Here’s a video from the discovery channel that shows this unique hunting method:

Green basilisks are beautiful-looking lizards that are common pets. They have been nicknamed the ‘Jesus Lizard’ because they can run across water, which is achieved by running very fast.

The male green basilisk has a fin on its back and a fin on the top of its tail, as well as interesting ornaments on its head. The females and young green basilisks look very plain and don’t have appendages on their backs, tail, or head.

Green basilisks use their tail for balance when running and climbing trees. They are capable of running on their hind legs. When they do, the green basilisk uses its long tail to stabilize its body.

When they run across water their long tail is a counterbalance that takes most of their body weight off their legs. Therefore, their legs are very light and allow them to outrun gravity and drag their tail as they run on water.

Green basilisks eat both insects and fruits. They rely on the element of surprise to snap up insects that haven’t noticed them. They harvest berries and munch on other fruits that fall to the ground or climb trees to eat them.

Giraffes are huge and very well-known animals and are some of the most popular animals in zoos. Giraffes have very long legs and also very long necks. Their tails are not that long compared to the rest of their body, but their tails are overall quite long.

Giraffes’ tails have a long black tuft of fur on their end that they use to swat insects off their body. It can reach most of its hind legs and halfway up its body.

Giraffes are commonly attacked by groups of lions. When a giraffe is defending itself from lions it will curl its tail up so that lions can’t grab onto it.

The tufted ground squirrel is found on the Indonesian island of Borneo. It is very elusive and is rarely seen in the wild. It primarily eats fruits, seeds, and insects. It has a very large and long bushy tail that is the same length as its body.

Here’s a short video of this elusive squirrel caught on a trail cam:

It looks similar to the common squirrel. However, it’s slightly larger and has unusual tufts of hair on its head.

Tail-to-Body Ratio: Adult tufted ground squirrels have a body that is 1 foot long (30 cm). But, their tail is as long as their body. Therefore, they have a tail-to-body ratio of 1 to 1.

Scientists are a bit baffled as to why tufted ground squirrels have such a large tail. The possible reasons that have been put forward are as a display during courtship (mating), and to confuse predators.

Using it to confuse predators seems likely. The reason is that the tail is mostly fur, so when a predator tries to grab onto it, they can’t get a good grip.

The ring-tailed lemur is a monkey-like animal that is only found on the remote island of Madagascar off the East coast of Africa. They are famously portrayed in the movie Madagascar. They have very long bushy, and beautiful tails. Their tails have black and white stripes and are very flexible.

Ring-trailed lemurs use their tails for communication. Lemurs live in groups of 15 to 30. When they are traveling along the ground, they will lift their tails up high in the air so that they can see who’s where.

They have one other use for their tail which is only used by the males. Male lemurs will rub their scent on their tails using scent glands on their forearms. Then they will challenge other male lemurs to a fight by swishing their tail in another lemur’s face. It’s a way of showing dominance, but if another lemur wants to challenge the pecking order a fight can break out.

Spider monkeys primarily live in trees, where they hang from their tail. They look like spiders that are hanging on by a strand of silk. A spider monkey’s tail has a skin-like area on the underside of the very tip of its tail. When they grab onto branches, their tail wraps around them a few times.

Spider monkeys live 114 feet to 164 feet (35 to 50 meters) above the ground. They also have pretty large and heavy bodies. The primary use of their tail is for grabbing and balancing. It offers an extra layer of security in case a tree branch breaks.

Jerboas are fascinating small animals that look similar to a mouse. However, they are much larger than the size of a rat. They also have very long and thin hind legs that are almost identical to a kangaroo. When they walk, they also hop with both feet like a kangaroo but will also run alternating their feet.

Jerboas have a rat-like tail with a tuft of fur on the end that is very long relative to their body. They primarily live in deserts. During the day, they sleep in burrows.

They make their burrows in the sand where they can keep cool from the scorching temperatures during the day. They go foraging and hunting at night when temperatures are cooler. They eat seeds, insects, and plant pods.

There are many different types of Jerboa, such as the Egyptian jerboa and the long-eared jerboa.

Tail-to-Body Ratio: There are many different species of Jerboa, so I’ve chosen the long-eared jerboa to measure the body-to-tail ratio. A jerboa’s body is 2.8 inches to 3.5 inches (7 cm to 9 cm). Whereas their tail is double the length of their body, 5.9 inches to 6.4 inches (15cm to 16.2cm). Therefore, the tail-to-body ratio of a jerboa is 2 to 1.

Jerboas primarily use their tail for balance. When jerboas are standing still, their tail is bent and the end sits on the ground. It acts like a minor 5th leg, helping a jerboa to balance. As a jerboa is running and jumping, its tail moves and flicks around behind them very fast.

It does this in response to minor variations in the terrain as they jump to allow them to stay balanced in the air, and land in an optimal way to jump again.

Stingrays have mighty jaws that can crack open oysters and other shellfish. They also feed on crabs, other small animals, and sometimes fish.

The primary purpose of a whiptail stingray’s tail is for defense against predators. Many stingrays don’t sting from their tail, but rather from a barb that is close to the base of their tail. However, many stingrays have spines along their tail. When they need to defend themselves, their tail can whip about and strike a potential predator.

Long-tailed grass lizards are a common pet. They have the longest tail-to-body ratio. In appearance, they look like other lizards apart from their incredibly long tail. They are reasonably small lizards.

The long-tailed widow bird is a small to medium-sized bird that is black all over, except for two red and white patches, one on each shoulder. It has unusually long tail features. In total, they have about 6 to 8 large and long tail feathers. They are native to a few African countries such as South Africa, Zambia, and Kenya. 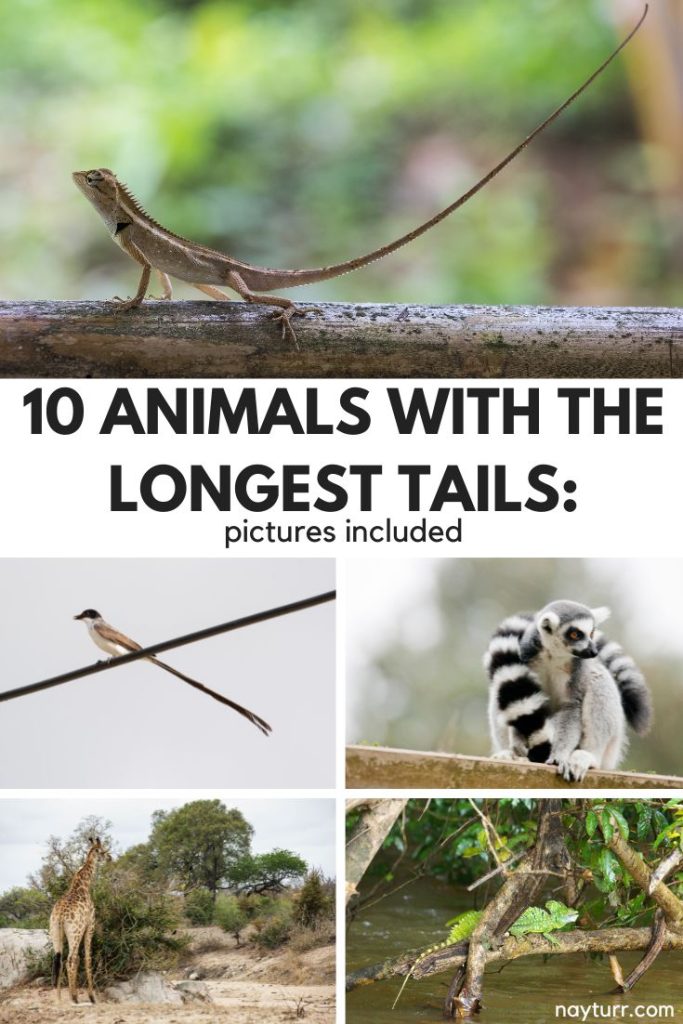